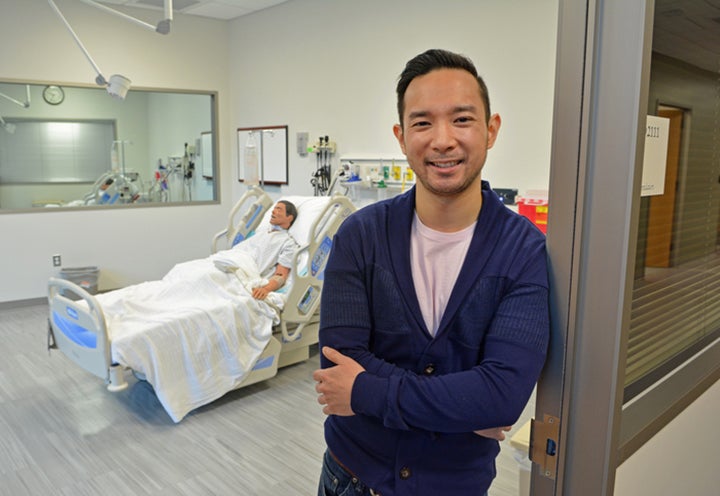 Yale School of Nursing student Shinichi Daimyo has worked and lived in some of the poorest and most rural places in the world, far from his immigrant roots in California.

But the farther he has gone, the more he has realized how much his passion reflects an intense loyalty to his first home and community.

For Daimyo, there is a comfort in knowing that his life’s mission — to bring mental health care to some of the world’s most vulnerable citizens — has been inspired by witnessing the struggles of his boat refugee community in Los Angeles.

Daimyo is among nine Yale students — and the first ever nursing student — who in 2015 were awarded The Paul & Daisy Soros Fellowship for New Americans, which supports the graduate educations of students who were born abroad but have become permanent residents or naturalized citizens of the United States, or who are the children of immigrants. His mother escaped to the United States as a boat refugee from Vietnam, and his father, who is from Japan, came to this country for greater opportunities.

Spending time in Los Angeles’ Vietnamese boat refugee community while growing up, Daimyo saw firsthand the effects of war- and displacement-related trauma — as well as the stigma of mental illness.

“Mental health issues were highly stigmatized amongst the Vietnamese boat refugee community, and consequently much of their trauma was never addressed,” says Daimyo, a first-year student in the Graduate Entry Prespecialty in Nursing program who aims to become a psychiatric nurse practitioner. “They suffered through incredible hardship just to come to America, and in their minds acknowledging mental illness brought negative attention to themselves, which was the last thing they wished to do. Unfortunately, this often meant that they didn’t ask for help, even in their most dire moments. But even in those moments, if someone was willing to seek out services, few, if any, were available.”

Since graduating from the University of Southern California (USC) almost a decade ago, Daimyo has worked to improve access to mental health care for some of the world’s most marginalized citizens. He recently spoke to YaleNews about that mission and his decision to study at YSN to better prepare for that task. Here is what we learned.

A cultural clash: Growing up, Daimyo felt a tug between his family’s cultural traditions and expectations and his more “American” classmates.

“So much of my early life was spent trying to balance those cultures and trying to figure out my own identity of being an American,” he says. “My parents spent a lot of time reinforcing what it meant to be Japanese or Vietnamese, much of which comes from a very understandable fear of losing their cultural identity and wanting to imprint that on me. Little things — like whether we buy food from the American or from the Asian market, whether I spend my weekends with my friends or with my family, or whether I join a sports team or study math — were pretty symbolic decisions.”

At USC, he was “encouraged” to study business, with “the practical goal” of making lots of money. “Having a well-paying job was important to my parents because they struggled so much to make ends meet,” he explains. “They came to America with nothing, and were determined to never have me experience this firsthand.”

A transformational gift: In his sophomore year, however, Daimyo kept thinking about his community and the traumas they continued to face, and began to take some psychology courses. He then went on a service trip to a Navajo reservation in Bluff, Utah, which resulted in a “transformative” experience, he says.

On the reservation, a tribal representative taught Daimyo and his USC peers the Navajo greeting of “Ya’ at’ eeh,” and what it meant for him and his community. “The tribal leader explained how the Navajo believe that our world should reflect the very best that we can imagine, stressing that it is important to work toward creating that world in the here and now,” says Daimyo.

“Their idea is that everyone is family, that we are all connected, and we have a responsibility to care for one another,” says Daimyo of the Navajo. “Despite the myriad of health, social, and historical issues that the tribe has to deal with, there is this core belief that the only thing that matters is human life and perpetuating others’ happiness. That’s the gift they gave me, and as I have since worked around the world, I have been trying to honor it.”

While at USC, he also studied abroad in Cyprus, where he learned more about the ongoing conflict between Turkish and Greek Cypriots, the experience of war trauma, and the issue of human trafficking in the region.

“I met and learned from people who completely redefined the term ‘exploitation’ for me, of what it meant to have no rights, no resources, and no support,” he says. “That shifted my attention more globally. The more I learned about their problems, the more I saw what it truly meant to be vulnerable, and the more I began to think about the physical and mental consequences of that.”

Gaining experience: Daimyo went on to earn a master’s degree in public health at Boston University. While there, he was awarded a fellowship by Duke University to develop global mental health policies for the World Health Organization (WHO). While at the WHO, he was recruited by a colleague to head then-Senator Barack Obama’s health care policy efforts in Florida. In 2009, he moved to Lesotho, a small mountain kingdom in southern Africa, where he was a health systems and quality improvement adviser for four hospitals. He received only a small stipend and housing, but says the experience was “invaluable” for teaching him how to build and strengthen health systems in a low-resource setting.

Upon returning to the United States, Daimyo developed domestic health policies related to the Affordable Care Act, but says he missed being able to focus his attention on both global and mental health. He spent a year working for the Harvard Program in Refugee Trauma, providing training on how best to provide trauma-informed care to Cambodian, Somali, Iraqi, Sudanese, and other refugee populations affected by torture and man-made or natural disasters.

Partnering for better health: Just over three years ago, Daimyo began working for Partners in Health (PIH), a job that provided him the opportunity to serve in countries across the globe (Haiti, Rwanda, Peru, Mexico, Lesotho, Malawi, Siberia, Sierra Leone, and Liberia) to develop sustainable mental health systems, working with local health care providers, activists, ministers of health, and others, he says, “who believed in the human right to health care.”

“My work was in some of the most rural areas of the world with some of the poorest and most marginalized populations,” adds Daimyo, who continues to serve as senior adviser to PIH. He says PIH’s mission aligns closely with his own: to bring high-quality health care and strengthen health systems in some of the world’s poorest places by partnering with local health professionals and local government officials. The organization is particularly committed to staying in the communities it serves over the long-term.

“Too often organizations will implement short-term projects whose outcomes are defined by everyone except the local communities, and leave as soon as the project is done. Nothing is built and no resources are provided to the community once the project is done. It leaves communities no better than when they started,” Daimyo says. “In all of our countries, we have made long-term commitments to create sustainable change. Our local colleagues and communities take the lead, and together we take the stance that our work is not done until every person in that country is afforded their right to health care. It may sound like a fantasy — impractical or impossible. But I can tell you that at PIH, we are, on a daily basis, making the impossible a reality. Working at PIH made me realize how powerful health care can be to achieve social justice in our world, and it is this principle that drives me every day.”

The heroes: His work in some of the world’s most remote areas also showed him that nurses are the “unsung heroes” in the poorest and most marginalized communities, says Daimyo.

“Everywhere I have worked, there has been one constant: in the most isolated places in the world, there may not always be a doctor, but there is always a nurse. Every nurse I’ve met is doing an incredible job serving the physical and mental health needs of these communities with little to no support.”

Many institutions, including the WHO, have warned that by 2020 depression will be the second leading cause of disability in the world, and currently mental, neurological, and substance abuse disorders cause the majority of disease burden globally, particularly amongst the poor, Daimyo notes. Given this future, Daimyo says that having effective and sustainable mental health services is paramount across the globe.

“If every estimation regarding the debilitating global growth and severity of mental health disorders is true, and we know that this will disproportionally hurt the poor, the question becomes: How are we going to address this issue and prevent it from growing even more?” asks Daimyo. “For me, the answer is nurses. For one, they are literally everywhere and represent the majority of most current health systems, which puts them in a perfect position to reach the most number of people. At PIH, nurses provide approximately 85% of our care. Secondly, they are incredibly skilled providers who have a strong clinical base of knowledge, and are perfectly positioned to learn and implement more advanced mental health care.”

Daimyo saw firsthand the role nurses can play in Rwanda, where generalist nurses were trained by PIH and the Ministry of Health to provide advanced levels of psychiatric and psychological care in the most rural areas of the country.

“Our successes have great implications for what can be done to address this massive mental health treatment gap,” says the nursing student. “Our work has shown us the incredible, game-changing potential of raising the profession of nursing. I truly believe this is the key to addressing the drastically growing mental health burden.”

A common thread and common humanity: Daimyo says he is especially pleased to be at the Yale School of Nursing, where students are committed to helping provide health care to marginalized populations in the New Haven community.

“YSN’s social justice-focused mission spoke to my belief of creating a more equitable world through access to mental health care,” he says.

Similarly, Daimyo says he is committed to continue to provide mental health care in poor communities.

“There is no greater feeling of vulnerability than being sick — we can all empathize with that to some degree,” he comments. “But that is particularly true if you struggle with a mental health disorder and are poor, whether here in the United States or anywhere else in the world. Everything I have been taught — whether from the Navajo or in Cyprus or in any of the countries I’ve worked  — strengthens my resolve to fight for people’s right to mental health care.

“In a lot of ways, what I feel like I am doing is living out the American dream my parents had for me,” he continues. “Their sacrifices gave me the incredible opportunity to empathize with the most vulnerable who have no voice, and I feel my work is the best way to honor them.”