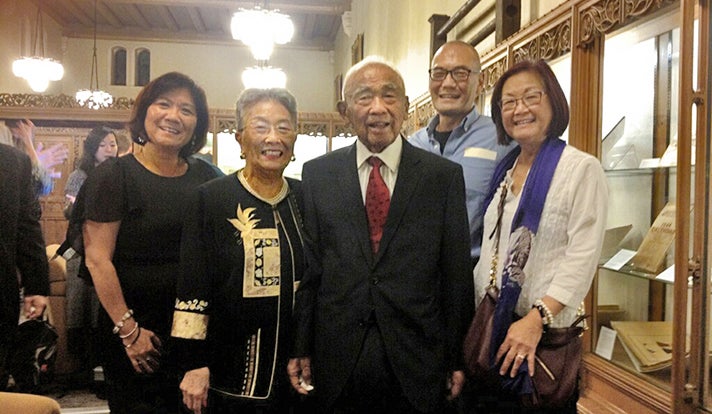 Normally, Steven Shimada can get to the center of campus in a few minutes from his Yale School of Medicine lab. But one recent afternoon, the trip to Sterling Memorial Library took about 70 years.

Shimada, a research associate in anesthesiology, had heard about the library’s new exhibit, “Out of the Desert: Resilience and Memory in Japanese American Internment.” He was particularly interested in meeting Yonekazu Satoda, whose personal diary is part of the exhibit. The diary includes Satoda’s experiences at the Jerome Relocation Center in Arkansas, during World War II.

That Arkansas relocation camp also happened to be where Shimada’s mother and her family were sent, after the U.S. government forced the family from their home outside of Los Angeles. Housed initially in a stable at the Santa Anita racetrack, they arrived in Arkansas in the spring of 1943.

“I saw a propaganda film once. It showed people smiling while movers were loading all of their household items onto a moving van, as they were being relocated. But the truth was, you got to take one suitcase with you, and had only 24 hours to get ready. Your stuff, your car, your house — gone,” Shimada said. “My Mom’s family had a farm near San Pedro Hills, where they grew vegetables. Mom told me Ginger Rogers came down from Hollywood just to buy their tomatoes.”

An estimated 120,000 people of Japanese descent, most of them United States citizens, were sent to internment camps during World War II after President Franklin D. Roosevelt signed an executive order to initiate the relocations. The government set up 10 camps, including the Jerome facility, where prisoners lived in barracks.

The Yale exhibit features about 100 items illustrating life in the camps, from letters and official documents to photographs and artwork. The artifacts come from the collections of the Beinecke Rare Book & Manuscript Library and Sterling Library’s Manuscripts and Archives. The exhibit is on display through Feb. 26.

Shimada, who is 67, said his parents’ generation did not dwell on past injustices and rarely spoke with their children about what happened during the war years. “There’s a Japanese saying, ‘Shikata ga nai.’ It means, ‘It can’t be helped,’” Shimada said. “That was how they felt about it.

Shimada’s father, Mitsuyoshi Shimada, who was born and raised in Seattle, also was relocated. He was sent to a camp in Idaho, where he lived until he entered the U.S. Army. Mitsuyoshi Shimada trained at the Army’s Military Intelligence School.

Shimada’s mother, Meri Nakama — she was named for America — was a teenager in the 1940s. She recalled being put on a train from California to Arkansas, and being told to leave the window shades down. She also remembered that she broke the rules and peeked out of the window to catch a glimpse of the Mississippi River near Memphis as the train journeyed east.

At the Jerome camp, she had her siblings to keep her company: older sisters Tomiko and Nobuko, and younger sister Sachiko. Their parents spoke only Japanese. Eldest daughter Tomiko often took on the role of acting head of the household while at Jerome.

Shimada has an old photograph of his Aunt Tomi from that time. She’s standing next to two of her sisters and a friend, smiling and wearing a headscarf. “She was losing her hair,” Shimada said. “It was from the stress of holding the family together.”

While in Jerome, the federal government asked the Nakama family if after the war they wanted to return to California — where they no longer owned property — or be sent to Japan. Shimada’s grandfather chose Japan. The family was sent to the Tule Lake internment camp in northern California, and Shimada’s grandfather was put in jail for the duration of the war. He was reunited with his family on the boat to Japan.

The family went to Yokohama and later to Kagoshima. Meri and her sisters had to sign a piece of paper renouncing their United States citizenship in order to accompany their parents; a lawyer later got their citizenship restored, arguing that the signatures were obtained under duress.

Ironically, the U.S. Army hired Meri to work at a military base in Miyazaki, near Kagoshima, because she spoke English. That is where she met Mitsuyoshi “Mits” Shimada, who was stationed there. They were married in 1947, moved to Seattle in 1948, and started a family of their own.

When Steven Shimada read about the Sterling Library exhibit and its material regarding the Jerome relocation camp, he phoned his mother, who is 88 and still lives in Seattle. His father died in 2010. He mentioned Satoda’s diary to his mother.

“She was laughing,” Shimada said. “She told me, ‘Oh, I know Yone (Satoda’s nickname). I wonder if he remembers us.’ A day later, she started sending me pictures.” It was the most his mother had ever shared about her relocation experience with her son.

Shimada got to Sterling Library early on the day of the exhibit opening. He brought his wife, Nadine, with him, and they spotted an older gentleman in a dark suit, sitting quietly in the exhibit room.

Shimada approached the man and asked if he could show him an old photograph on his cell phone. Satoda agreed, staring for a moment at a slightly blurry photo of a young man dressed in cuffed blue jeans and a short-sleeved shirt, with his hands on his hips.

In the moments that followed, Satoda looked at several of Shimada’s photos from Jerome and told him he remembered the Nakama family fondly. Shimada posed for some photos of his own with Satoda, to send back to his mother.

“This has made me appreciate how much my parents went through, and their struggles,” Shimada said. “I understand now why we never spoke any Japanese at home. We were to be completely Americanized.”