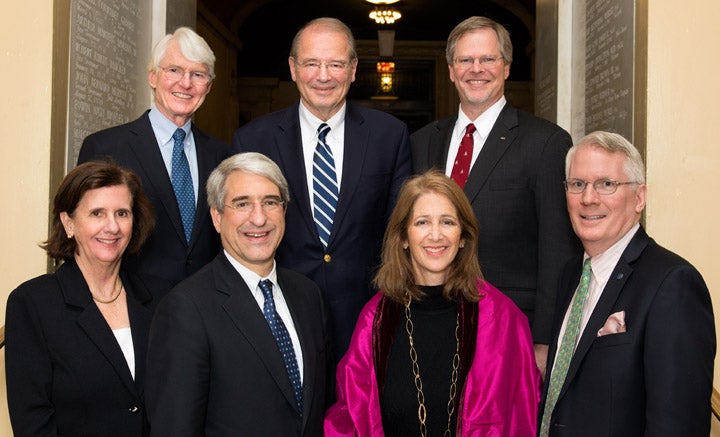 Five individuals were honored by Association of Yale Alumni (AYA) and presented with the Yale Medal by President Peter Salovey ’86 Ph.D. and AYA chair Lise Chapman ’81 M.B.A. at a dinner in Yale Common on Nov. 14, during the AYA Assembly LXXIV.

Inaugurated in 1952, the Yale Medal is the highest award presented by the alumni association and is conferred solely to recognize and honor outstanding individual service to the university.  Since its inception, the Yale Medal has now been presented to 298 individuals, all of whom not only upheld the ideals of the university, but also were conspicuous in demonstrating their support of Yale through extensive service on behalf of Yale as a whole or one of its many schools, institutes, or programs.

Your tireless devotion to Yale’s singing community as a student and alumni leader combined with your generosity in sharing your considerable musical talents has enhanced Yale’s long-standing tradition of vocal music. You have helped to amplify female voices in Yale song and ensure that Yale’s rich patina of choral music continues to inspire generations of singers across the globe. For more than 25 years, you have regularly opened your home and welcomed Yale singing groups and alumni from New Blue, Whim ’n Rhythm, and the Yale Alumni Chorus for musical events that created lasting camaraderie among students and alumni. As president of the Yale Alumni Chorus, you organized innovative a cappella workshops that strengthened bonds among Yale Glee Club and singing group alumni, while your service planning visionary alumni concert trips to foreign lands gave voice to Yale ambassadors on three continents. Your inspirational role as a member of the AYA Board of Governors and your 25th Reunion Committee, and as president of Whim ’n Rhythm’s Alumni Association offers a compelling testament of leadership and shows how an alumna can make a difference.

We recognize the extraordinary time and talent you have dedicated to your alma mater, and with our deepest appreciation the Association of Yale Alumni awards you its highest honor, the Yale Medal.

No alumnus of your generation has done more for Yale. Your service over the last two decades is unparalleled. Just your current roster of service is staggering: You now are co-chair of Yale Development Council, a member and founding chair of the External Advisory Board of the Yale Institute for Biospheric Studies, member and founding co-chair of the Leadership Council of the School of Forestry & Environmental Studies, member of the Peabody Museum Leadership Council, member of the Corporation’s Buildings and Grounds Committee, and member of the Yale School of Architecture Dean’s Council. And this follows 12 years on the Yale Corporation, including two years as the senior fellow during a critical time of presidential transition. Your amazingly sensitive architectural eye has scrutinized every Yale building project of the past 14 years, and made every one better. Your enthusiastic advocacy helped us to envision the advantages of adding two new residential colleges. And you have been one of the most generous donors in Yale’s history, strengthening the institution in innumerable ways.

For your passionate leadership and exceptional generosity, the Association of Yale Alumni is honored to honor you by bestowing its highest award, the Yale Medal.

We admire your humility and grace as a true and devoted volunteer for Yale. Although quiet and unassuming in manner, you continually demonstrate enlightened vision and dogged determination in service to Yale, most recently as you oversaw the successful planning and launch of Yale Alumni College, which you now chair. This initiative, a result of your persistence and patience, gives Yale alumni affordable access to lifelong learning through seminars led by retired Yale professors. You have shared your deep appreciation for strong alumni communities with universities around the world as a participant and producer with the Yale Global Alumni Leadership Exchange (YaleGALE), bringing hundreds of graduates to Israel, France, and the Baltics. An admirable ambassador for Yale, you served on dozens of trips abroad with YaleGALE and the Yale Alumni Chorus. At home, you show how Yale alumni make a difference in our communities by spearheading partnerships with the Boys and Girls Club in Greenwich, New Haven, and Harlem for the Yale Day of Service. Your leadership as an executive officer of the AYA Board of Governors, and as president of the Yale Glee Club Associates and of the Yale Alumni Association of Greenwich gently instilled these values.

It is with distinct pleasure that the Association of Yale Alumni recognizes you with its highest award, the Yale Medal.

We remain in awe of your exceptional commitment to Yale. You have brought boundless energy, passion, and insight to your Yale volunteer activities. A true Renaissance man of volunteers, you gracefully took on leadership roles in clubs in San Francisco, Silicon Valley, and Pittsburgh; expertly served your class as reunion co-chair; and provided astute guidance as head of the AYA Board of Governors. A law professor and compelling communicator, you have an ability to listen and distill a broad range of viewpoints into one, coherent vision that proved invaluable in shaping the two AYA strategic plans that came forth during your decade of service on the AYA Board. During your tenure as chair, you launched a global strategic planning process and led development of the AYA’s current Strategic Plan, titled “Ambassadors in Action.” In addition to our gratitude for your generous dedication to Yale’s alumni, we deeply appreciate your visible and successful role as alumni counselor to the search committee for the university’s new president.

For your inspired leadership and wise counsel, which has molded the AYA into a better and stronger organization, benefiting the university, its alumni, and the communities they serve, the Association of Yale Alumni presents to you its highest award, the Yale Medal.

Your remarkable innovation and unbridled enthusiasm in raising funds for Yale continues to amaze us. Year after year, reunion after reunion, you have cheerfully and successfully encouraged classmates and other alumni to take part in ensuring the financial health of this great institution. As chair of the Alumni Fund, you presided over campaigns that raised record-breaking amounts despite economic recession, and over the inaugural Elihu Day, which had students write thank-you notes to donors, thus instilling a sense of gratitude and commitment to giving. An active volunteer on behalf of Yale ever since you graduated, you served as chair of agents for your class for more than 25 years. You co-chaired all of your Class Reunion gifts and stepped up for several terms on the Alumni Fund Board, Executive Committee, and Nominating Committee. In addition, you offered your considerable talents ex officio to the AYA Board, Yale Corporation development committee, University Council, and Yale Tomorrow campaign committee. A dedicated member of Yale GALA, you served on the planning committee for Yale’s second LGBT Reunion. You also remain a generous mentor for alumni in theater.

We find ourselves profoundly indebted to your service to Yale, and it is with deepest gratitude that the Association of Yale Alumni bestows on you its highest honor, the Yale Medal.