In West African art and culture, the image of a long-necked bird with its head turned backwards to take an egg off its back is the symbol of a well-known proverb in the Akan language of Ghana, which teaches that in order to move forward, one must first explore the past.
By Susan Gonzalez
Share this with Facebook Share this with Twitter Share this with LinkedIn Share this with Email Print this

In West African art and culture, the image of a long-necked bird with its head turned backwards to take an egg off its back is the symbol of a well-known proverb in the Akan language of Ghana, which teaches that in order to move forward, one must first explore the past. More literally, the proverb translates into English as “It is not wrong to go back for that which you have forgotten.” 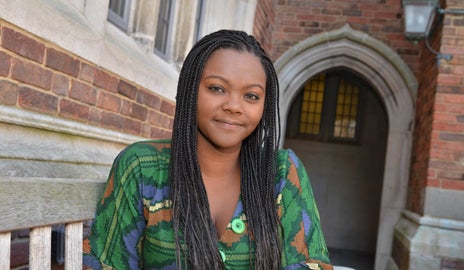 For Yale sophomore Zahra Baitie, the mythic bird — called Sankofa — is a particularly meaningful emblem for where she is in her own life.

While attending an international high school in her native country of Ghana, Baitie says she was well versed in such historical events as the English Reformation and Italian Renaissance, but learned little about the history and current events of her own or other African nations. Since coming to Yale, she has made it a mission to become acquainted with what was “forgotten” in her past by gaining greater knowledge of African history as well as an awareness of the issues African nations presently face.

Her quest began while she was still in high school, when she spent a semester at the African Leadership Academy, which aims to develop and connect young people likely to have a transformative impact on Africa. But an eye-opening experience during her freshman year at Yale helped give her goal even greater import.

“In a class taught by Professor Christopher Miller on the Congo, I was shocked to learn the tragic history of the Congo and that an estimated six million people have died in that country since 1996 as a result of political conflict,” recalls Baitie. “I had always known that the Congo suffered under the Mobutu regime, but I hadn’t known the details of the country’s history and current predicament. Needless to say, hearing that statistic was very disturbing and startling to me. I became passionate about learning not only my local history but also that of the Congo and African history in general.”

With classmate Akua Agyen, Baitie co-founded the Yale Undergraduate Association for African Peace and Development (YAPPD), dedicated to promoting peace, conflict resolution, and development in Africa. In addition to fostering a greater awareness of issues facing Africa, the group encourages students to become engaged in resolving issues and to pursue careers in African countries.

“We see the organization as a way of adding our voices — as the youth of Africa — to the mix,” says Baitie. “I believe that Africa is truly at the cusp of a renaissance and there are many opportunities that can and need to be seized. But at the same time we must ensure that this renaissance is not limited to a few countries; the onus is on us, as Africans, to make sure this happens. Development can’t be done for us; it must by done by us. Thus, we hope to spread information about various pertinent issues and to inspire other Africans to use their intellect and ability towards the development of our continent.”

On April 13 and 4, the YAPPD hosted its inaugural conference, “Sankofa54: The African Youth Empowerment,” which focused on the ways young people can help bring positive change to Africa in the areas of economics, peace and conflict resolution, education policy, and health. The event, which had as its theme “Developing Africa Through Transformational Leadership,” featured keynote talks by young Africans who are already trailblazers in a number of fields.

For Baitie, hosting a major conference on campus just one year after the founding of YAPPD is proof of the power of ideas.

“The idea for a University-wide conference came about during a dinner conversation, and we were able to bring it to fruition just one year later because of the incredible guidance, support, and enthusiasm of Yale students, faculty, administrators, and staff,” she says. “Here at Yale, there is a culture where, if you have a vision, you can translate it into a reality. When I was in high school, two of my mentors were Yale students, and they told me that Yale is a place where you can tap into an energy and find a supportive community. It is even better than what they told me. It has truly surpassed my expectations in my experience so far: Yale provides the resources and a canvas, then just stands back and lets you paint your masterpiece.”

In keeping with her belief that visions for change can be made into reality, Baitie and other members of YAPPD wanted to combine the sharing of information at the conference with action. Hence, the proceeds from the conference will be used to support a community center in the Congo, called CAMME, which offers vocational training to former child-soldiers, street children, and abandoned children in the country.

“My father often inspired me by inculcating a problem-solving spirit by constantly reminding me that for every problem there is a solution to be found,” Baitie says. “Both my parents also strongly believe that one’s life is meaningless unless you make a difference to the lives of others, so it’s from this that I draw much of my inspiration.”

The Yale student — who is majoring in African studies and political science — did research on child labor in Ghana as an intern for Ghana’s Commission of Human Rights and Administrative Justice, and she developed a policy paper on how to address the problem. She has worked with street children in the Ghanaian city of Tema and last summer led a group of Yale students to Ghana to engage in a literacy project at the SOS Village in Kumasi. Among other activities, she was engaged last semester in the Famine Relief Initiative, which raised funds for a Somali clinic that provides emergency food. As a member of the fifth class of the Harambe Entrepreneur Alliance, a program for young leaders from Africa, she was invited this year to attend the Harambe Breton Woods Symposium, part of which was held at Yale in March. This summer, to deepen her understanding of African countries and the issues they face, she will intern at the U.N. Population Fund Agency in Kigali, Rwanda.

Baitie believes that ending conflict in Africa is key to its success, and says establishing peace is essential to enhancing opportunities for young people on the continent. As dedicated as she is to that cause, she has not limited her study to Africa. She is currently studying the Chinese language and will take a leave of absence next year to study Mandarin, with funding from a Light Fellowship.

“China is investing heavily in Ghana, Zambia, other countries, and I think it’s imperative that more Africans learn to speak Chinese,” says Baitie.

She is also interested in educational reform in her home country.

“I want to help create a system that allows students to survive in an international setting but also equips them with local knowledge and understanding,” she says. “We need to understand our continent, our complex history, the beauties and tragedies of our past, and the current state of our countries. After I graduate, I will definitely return home, and I hope I can contribute towards development in Ghana, working in the field of education. I believe there are many opportunities for helping to bring about change.”

Baitie reckons that it is time Africa was engaged with more as “a place of opportunity and potential, as opposed to a place of despair and poverty,” she says.