Map of Life named a 2016 Best App for Teaching & Learning 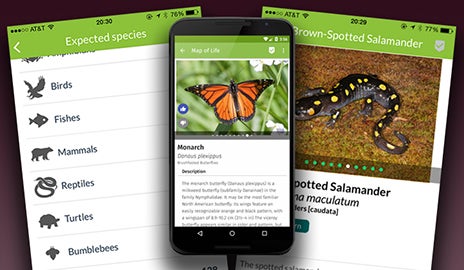 The American Association of School Librarians has named Map of Life, a Yale-led project with the University of Florida that assembles and integrates multiple sources of data about species distributions worldwide, as a 2016 Best App for Teaching & Learning.

The recognition honors apps of “exceptional value to inquiry-based teaching and learning” by fostering innovation, creativity, active participation, and collaboration. The award was announced June 25 at the American Library Association annual conference in Orlando, Florida.

Walter Jetz, associate professor of ecology and evolutionary biology, and director of the Yale Program in Spatial Biodiversity, is the guiding force behind Map of Life.

The Map of Life app puts a wealth of the world’s knowledge about biodiversity in the palm of a user’s hand. It can tell users which species are likely to be found in the vicinity, with photos and text to help identify and learn about species. The app also helps users create personal lists of observations and contribute those lists to scientific research and conservation efforts.