Stephanie Siow ’17 knows that young adults can make a big mark on the world, but she never imagined that just a few short weeks after graduating from Yale she’d have the attention of a world leader as she spoke about the kinds of change she’d like to see.
By Susan Gonzalez
Share this with Facebook Share this with Twitter Share this with LinkedIn Share this with Email Print this

Stephanie Siow ’17 knows that young adults can make a big mark on the world, but she never imagined that just a few short weeks after graduating from Yale she’d have the attention of a world leader as she spoke about the kinds of change she’d like to see.

As one of nearly 70 delegates at the Youth 20 Dialogue (Y20 summit) held in early June in Berlin, Siow delivered a speech to German Chancellor Angela Merkel outlining her belief in the need for universal digital access and digital literacy, better cyber security policies, and the adoption of e-government services to facilitate two-way communication between youths and the government, among other topics. She represented her home country of Singapore at the Y20 summit, which is the youth equivalent of the G20 Summit that will be held this year in Hamburg, Germany in July.

“It was remarkable to see a world leader give her time to listen to youth opinions and recommendations, which will be presented to global leaders at the official G20 summit,” says Siow, who worked on the position paper presented to Merkel with a group of six other youth delegates. She admits that she and the other young presenters were “incredibly intimidated” before the meeting with Merkel at the Bundeskanzleramt (the German Chancellery), but says they were excited by the opportunity to share their ideas to such a high-level leader.

“Merkel commanded presence and respect in the room,” Siow says. “She quickly chased the media out of the room and asked us to talk about the things we cared most about.”

Following Siow’s presentation, the German chancellor commented that young people are so often glued to their mobile phones, even in such settings as museums. “I told her that, indeed, we are increasingly alienated from social interactions and other people due to technology; yet the internet has made us the most inter-connected generation yet, for we can enhance existing relationships through new interfaces and interactions,” said Siow. Merkel also queried the Yale graduate about the future of artificial intelligence in global society.

While Singapore is not a G20 member, the country is invited to the G20 Summit as a representative of the Global Governance Group (3G), “a coalition of 30 small- and medium-sized countries (ranging from Jamaica to Switzerland) that advocate for greater transparency and inclusivity in G20 processes,” Siow explains. She notes that the G20 comprises 19 countries and the European Union “that account for two-thirds of the world’s population, four-fifths of gross world product, and three-quarters of global trade. It is the central forum for international cooperation on financial and economic issues.”

Siow and other delegates in the Y20 working group identified several important concerns of the 3G: economic inclusiveness and the fair distribution of the fruits of growth; international commitments to free and fair trade; and the high rates of youth unemployment around the world. 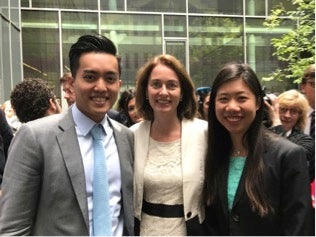 “I think it is in Singapore’s interest to commit to an open, free economy to create opportunities and jobs for youths, and increase access to new markets,” says Siow, who along with the other Y20 delegates met with Katarina Barley, Germany’s federal minister of family affairs, senior citizens, women, and youth, and with State Secretary Steffen Seibert. “Seriously, as a tiny country, we fundamentally cannot be isolationist,” adds the recent graduate. “I contributed to the working groups on these topics by attending their discussions and giving feedback. In our final communiqué, we did speak up against protectionism in favor of fair conditions and competition to improve job opportunities and achieve sustainable outcomes.”

Siow majored in global affairs at Yale with a concentration in international development. In 2013, she was one of five high school students chosen by Singapore’s Public Service Commission to receive a President’s Scholarship, awarded by the president of the country, for their academic and extracurricular achievements, character, and leadership potential. In the summer after her sophomore year at Yale, she interned in Singapore’s Ministry of Finance, where she worked on making welfare funding in the country more sustainable. Various government officials had recommended her involvement in the Y20 summit.

“The international crowd [at the Y20] reminded me of the Orientation for International Students at Yale (OIS) that I attended my freshman year and organized in my sophomore and junior years,” Siow said. “We were similarly jetlagged, blurry-eyed, and running on adrenaline for eight days. The other delegates were youth leaders in their own countries in the private, public, and non-profit sectors. There were a couple of college students as well. I made many friends from across the globe; the closest friends I met are from Saudi Arabia, Italy, and Argentina. There were opportunities for us to simply hang out with the other delegates and hear their stories, like when we went on tours of the Berlin Wall and various neighborhoods in Berlin.”

At Yale, in addition to her work planning OIS, Siow co-founded the Yale Students Southeast Asian Movement (SEAM), an undergraduate group that shares information with and fosters dialog among Southeast Asian youth to inspire them to improve their own communities. She was a co-leader of the Christian Union at Yale and a freshman counselor in Pierson College. She was involved with the Yale Hunger and Homelessness Action Project and was a regular volunteer at the Sunrise Café, a Chapel Street soup kitchen with a focus on restoring the dignity of its patrons.

During her sophomore year, Siow traveled abroad to India, South Africa, and Brazil to study public health and do research about stigmas related to mental health. Following her junior year, she interned with the New York City nonprofit organization Freedom for All, which combats modern-day slavery such as sex trafficking, forced and child labor, and more. Siow says her interest in the global issue of human trafficking was piqued during a class she took at Yale on the subject taught by William Casey King, a lecturer and director of the university’s Capstone Programs at the Jackson Institute for Global Affairs. “Human trafficking exists in every country in different forms, some very subversive,” Siow notes.

The new Yale alumna says her campus suitemates were all dedicated to community or public service, which further inspired her to follow suit.

“With them and at Yale generally, I had all these discussions with people who really challenged me on literally every front and on every difficult issue. We talked about everything from the state of public education to mass incarceration,” she says.

Since the Y20 summit, Siow has begun work for the Singapore government on foreign immigration policy. She says that her experience at Yale has well prepared her to further pursue her interest in international development.

“From a young age, I wanted to see what was beyond this island [of Singapore]. … I think Yale has been the most life-changing thing I could possibly have imagined. It has completely changed how I experience the world. I feel more ready to engage with the world in spaces in which there will be people with a lot of power and where big decisions are made. This is because of discussions with the mentors I’ve had and with the professors I’ve had the privilege of being taught by,” says Siow.

“On a more personal level,” she continues, “I’ve met international students and Americans who have such diverse backgrounds and experiences, which has helped me to be able to speak with and understand people, to listen better to where they are coming from. It’s helped me to empathize, and has really sharpened my ability to look at a global issue and see it both from an individual and a collective perspective. Yale has laid all the foundations for me.”