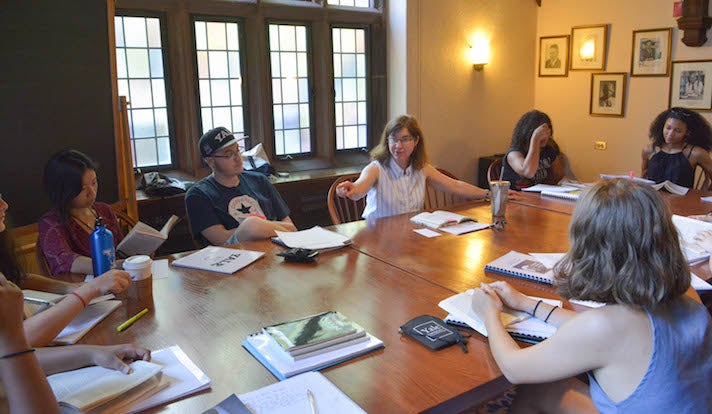 As the 12 New Haven high school students who formed its inaugural class prepare to graduate, “Citizens, Thinkers, Writers: Reflecting on Civic Life,” (CTW) a residential summer program and school year mentorship program, is wrapping up its inaugural year and preparing for the sequel.

Bryan Garsten, professor of humanities and political science, and Kathryn Slanski, senior lecturer in humanities and Near Eastern languages, started the program last summer to introduce high school students to the trials and joys of college life. Students live on campus in Timothy Dwight college for two weeks, intensely studying and analyzing classical and modern political philosophy, poetry, and literature, especially as the works relate to engaged citizenry in New Haven.

“The works we studied raised repeatedly and from different perspectives questions about justice, about different kinds of inequality, about security and freedoms, political morality, personal, familial, and civic responsibility,” Slanski said, emphasizing that “such issues elude pat ‘sound-bite’ type answers.”

After the two-week course, Garsten and Slanski continued to mentor the students throughout their senior year with the help of one graduate student, two undergraduate students, and a collection of New Haven community figures.

In October, the students met with National Poet Laureate Robert Pinsky, and in March, the group had a tour at the Beinecke Rare Book and Manuscript Library of an exhibit on the Harlem Renaissance, “Destined to be Known: The James Weldon Johnson Memorial Collection at 75” with Melissa Barton, Curator of Drama and Prose for the Yale Collection of American Literature and curator of the exhibit.

“Part of our objective with the summer program was also to maintain a relationship with the students during their senior year, primarily to be a resource for them as they went through their college application process,” Slanski said. “The majority of them … really didn’t know how to begin, so we tried to educate ourselves and get connected with resources here on campus to help us help them.” 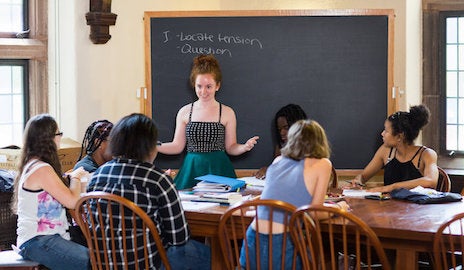 This objective was especially important because the program prioritized low-income and first-generation students when selecting participants for the program. Some of the students’ schools provide college counseling resources, but the CTW staff help answer any remaining questions and provide individual assistance.

“First, we had them meet with their undergraduate [counselors],” said Stephanie Almeida, a Ph.D. student in political science, who serves as the program coordinator. Sophie Dillon ‘17 and Denzell Jobson ‘17, who lived with the students in Timothy Dwight and advised them during the course and throughout the year, “met with them one-on-one to look over essays,” added Almeida, “and for the students who wanted it, we offered to connect them with New Haven Reach, a student group here, for some additional mentorship.”

In addition, the participants continued to hold meetings with New Haven and Yale community leaders throughout the year, which was an integral aspect of the summer program. According to Almeida and Slanski, the meeting with John Yi ‘13, a Yale graduate and current Yale Admissions officer, had a big impact on the students.

“I think a lot of the students were hesitant to apply to schools they thought would be out of their reach financially and academically, and John really encouraged them not to discount schools they were interested in,” Slanski said.

It’s not easy to balance the schedules of 12 busy high school seniors, but Slanski says that perhaps the most rewarding part of the program is watching an “intellectual cohort” of diverse perspective and life goals transform into a “social cohort” as well.

“When we get the students together, the room is full of joyful noise,” Slanski said. “We met a couple weeks ago and asked them to give updates on their college processes … and they really lit up, clapping for each other, and everybody was really genuinely happy for everyone else.”

While the CTW team members say they will miss their first class, they are currently planning for the second. They have partnered with the Office of New Haven and State Affairs and have solicited nominations from local high school teachers, as well as recruiting undergraduates to apply for residential tutor positions.

Slanski and Almeida are confident about the upcoming year. Almeida shared an email written by one of the 12 students thanking “Citizens” for the experience.

The email read: “It was amazing to see how a group of strangers quickly became a group of friends. We all became powerful thinkers. Thank you so much for allowing me to become better than my own expectations.”

To find out more about “Citizens, Thinkers, Writers: Reflections on Civic Life,” visit its website.