After winning the Yale Drama Series playwriting award in 2010 for her play “blu,” Virginia Grise was struggling with making a career in the theatrical world, and wrote of her challenges to fellow playwright Sir David Hare.

Hare, who had been the judge for the Yale Drama Series the year Grise won, gave her some advice that has been invaluable to the younger playwright ever since.

“Any playwright of any originality will always feel that [he or she] is writing for a theater that doesn’t exist,” wrote Hare to Grise. “That’s what originality is. … Ultimately, you are on your own, and there is nothing to do if the right theater doesn’t exist except either create it or move on and write another play.”

In a March 9 panel discussion on “Why Playwriting Matters,” held in celebration of the 10th anniversary of the Yale Drama Series, Grise said that Hare’s advice gave her the “gift” that freed her imagination.

“I was given a freedom to say you can do and imagine anything you want in terms of what you want your theater to be,” she told a large audience in the auditorium of the Whitney Humanities Center. “And that’s a gift beyond the $10,000 [the Yale Drama Series award], to have somebody say, ‘I respect your voice. I think it’s a unique voice,’ and how are you going to create it when nobody else will be there to produce? I feel that that was the challenge I had after winning the award, figuring out how to create the theater that I choose.”

Grise and Hare were among six panelists who shared their thoughts about and experiences with playwriting. The other panelists included Donald Margulies, adjunct professor of English and theater studies at Yale; Marsha Norman, co-chair of playwriting at Juilliard and also a former Yale Drama Series judge; Neil Wechsler, a 1996 graduate of Yale College and the 2008 Yale Drama Series recipient; and Jeffrey Sweet, a playwright and theater historian whose book “What Playwrights Talk About When They Talk About Writing,” was just published by Yale University Press (see related story, below). The discussion, moderated by Yale University Press director John Donatich, also celebrated the book’s publication. 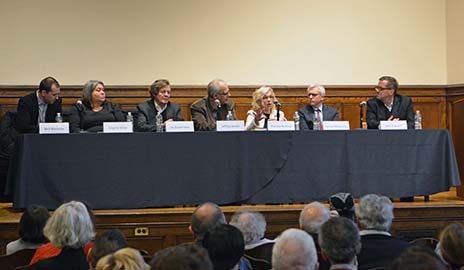 The challenge of writing plays in modern times was a common theme expressed by the noted playwrights during the discussion, despite the successes they have had in their careers. Hare has written over 30 stage plays and more than 25 screenplays, and was knighted by the British government for service to the theater. Margulies and Norman have won the Pulitzer Prize for their works “Dinner with Friends” and “night, Mother,” respectively, among other honors. Grise has also won the Whiting Writers’ Award, the Playwright Center’s Jerome Fellowship, and the Pregones Theatre’s Asuncion Award for Queer Playwriting, among other accolades. Wechsler, whom Edward Albee selected for the Yale Drama Series, is executive director of Against the Grain Theater Festival, an educational playwriting company in Albany, New York. Sweet is an award-winning playwright who has also written histories of the Second City troupe and the Eugene O’Neill Theater Center.

“Even with [my] M.F.A, even with the Yale award, playwriting in the U.S.A. is not an easy thing,” acknowledged Grise.

Hare said one reason he appreciates the Yale Drama Series (and the Yale University Press’ publication of the winning play) is because it “essentially makes the claim that [plays] are equal to literature.”

“In England, at least, and I think it’s true in America, there’s always been a slight snobbery that plays are not literature,” said Hare. “The way in England we know we are not being taken seriously is the star system: In other words, the critics give you stars … as they do to restaurants, to movies, to television programs — and significantly, they do not do to novels. In other words, novels are serious in their minds in some way that plays are not serious.”

One of the reasons that audiences perhaps perceive plays as entertainment rather than literature, said Margulies, is because people don’t always remember that a play is a published piece.

“[T]hey think of a play as something they go to see and they go somewhere for — as they would a restaurant or a movie,” he said. “This ‘star system’ tends to reduce and trivialize what we have devoted our lives to.”

Several of the panelists noted that the act of reading a play is, in itself, challenging work.

“One of the difficulties of writing plays is that you can’t really [give characters] an interior life … ,” said Sweet. “[The reader] has to imagine the interior lives of a number of characters. You have to imagine so much. It’s way more exhausting than reading fiction or nonfiction. It’s a much more difficult kind of literature to read because it requires more of the reader than almost any other writing on the page.”

Wechsler believes that both play reading and writing should be a part of learning experience for students when they are young. In his own work as a teacher, he said, he has found that many high school students do not have experience reading plays. When students are first called upon to read a text, they sound “flat,” said Weschler, but the more they learn to discover subtext and to understand the process of performance, the more a work can “pop” for them.

To be a playwright, said Norman, means having a willingness to share whatever is important to you, and to make yourself entirely vulnerable before an audience.

“[You have to have] a willingness to be seen … and to be dismissed and devalued and eliminated,” she said. “Truly, most writers can’t tell which of their plays are going to do well and which will not.” While writing, Norman envisions how her plays will unfold on the stage but said that this too, is a great unknown. “Sometimes we are shocked when the piece on stage doesn’t bear much resemblance to what was actually written or envisioned,” Norman said. “It’s as heartbreaking an experience as you can get.”

Margulies said that in teaching, he has found that student playwrights often try to tackle many themes at once in their works. He said he urges them to be more patient, to hold some of their ideas for future works. The themes of loss and family that mattered to him in his 20s are still the themes that interest him 40 years later, he noted.

“I think for all of us when we are in our 20s there is a sense of impatience with ourselves, and we don’t see a career and a body of work ahead us,” said Margolies.

Asked about the role of universities in helping to create the next generations of playwrights, Sweet noted that many of the “great playwrights” never earned M.F.A.s or even went to college at all. He lamented a current tendency of literary agents to look only at the manuscripts of those who graduated from established theater programs.

“They would never have looked at August Wilson, Tennessee Williams … [T]hey would never have looked a lot of people considered the great playwrights. … An awful lot of people with voices are being edged out of the theater.” He noted that some of the most highly regarded playwrights, including Eugene O’Neill and Lanford Wilson, “had some hard living behind them” before they had success.

“There is something about having had some hard living that is useful for playwrights, as opposed to people who go right from their parents’ houses to university,” Sweet said.

Francine B. Horn — who in honor of her late husband founded the David Charles Foundation that supports the Yale Drama Series — remarked at the start of the event that in choosing an awardee for the series, the judges (and the readers they select to help them narrow down the winner) read play manuscripts without knowing anything at all about the backgrounds of the playwrights. She noted that the number of submissions for the award has risen from 600 in its early years to more than 1,600 today.

While the reading of those submissions can take a long time, there is always something that stands out about the one winner, remarked Hare. “We look for that singing voice,” he said. 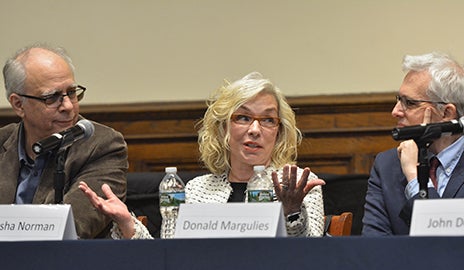 Playwriting is a solitary craft, and playwrights don’t often talk to each other about their work, Jeffrey Sweet said during the March 9 panel discussion on “Why Playwriting Matters.”

David Hare on seeing his work produced: “… I think all playwrights have techniques for how horribly exposing it is to detain 500 to 1,000 people a night and say to them, ‘I am worth listening to for two and a half hours.’ That is a very, very wearing way of life. If playwrights are grumpy and difficult people, it is not surprising because that exposure to listening to what people really think of you. … Let’s not forget Samuel Beckett never dared to attend a performance of his own play. That was his way of dealing with it. I sit there listening to every cough, every moment of inattention, every phone call, every man looking at his watch, every man who has been dragged by his wife to the theater and doesn’t want to be there, every scene that I’ve written that’s failed, every moment that I dreamed would be so great and isn’t so great. Yeah, that takes a toll on your personality.”

Marsha Norman on the wrong advice: “I think what irritates me the most is the one that gets said most often: ‘Write what you know.’ It’s just too vague. You don’t just write what you know; you write what you have to write. What’s the reason you wanted to take this big leap to be a writer? Of all the things that you can do, this is the risk you want to take with your life? Why? Because you want to explore this mystery of how did this trapped girl get out? Okay. That’s something to write about, that’s your stuff.”

David Margulies on teaching undergraduates: “I expose my students to the plays I love to talk about, plays that inspired and continue to inspire me. I focus primarily on contemporary American and English plays. So I teach David Mamet (‘Glengarry Glenn Ross’), Harold Pinter (‘Betrayal’), John Guare (‘Six Degrees of Separation’), and my all-time favorite, Thornton Wilder’s ‘Our Town.’ Caryl Churchill is great fun to teach because she’s always exploring new ways to tell stories onstage; I teach a few of her plays — ‘Far Away,’ ‘Top Girls,’ and ‘Mad Forest.’ I teach Tony Kushner’s ‘Angels in America.’ And Anna Deavere Smith’s ‘Fires in the Mirror’ as an example of documentary theater.

What’s great about teaching these undergraduates is that — maybe by the sixth week of the term, about halfway through — I find myself sitting back while they’re conducting the post-play discussions. And they’re posing the questions, saying things like, ‘What is the event here? Where’s the conflict? I can’t figure out what he or she wants.’ I very much believe in the event.”