In a recent seminar in Luce Hall, a group of Yale undergraduates described how they had stepped out of their comfort zones since they last met together in the classroom.

One said she had composed an apologetic email to a friend with whom she’d had a falling out, making herself vulnerable if her effort to reconcile failed. Another described how she made a choice to say “yes” more often to invitations from friends when her usual response was to decline. Yet another undergraduate recounted how she got up the nerve to answer a request to write something about a friend who had recently died, even though it was a painful experience to do so.

The exercise is part of a weekly “courage challenge” for students in the undergraduate seminar “Courage in Theory & Practice,” offered for the first time this semester. The seminar is led by Rosalind (“Roz”) Savage, a senior fellow at the Jackson Institute for Global Affairs, who is no stranger to courageous feats: She is the first woman to row solo across the Atlantic, Pacific, and Indian oceans, earning her four Guinness World Records and the distinction of being named National Geographic’s Adventurer of the Year in 2010. She was a World Fellow in 2012.

None of her students seemed the least bit intimidated by Savage’s grand achievements when sharing their own challenge successes. In one of their first seminar sessions, in fact, they learned that their instructor’s idea of courage doesn’t require epic actions.

“She reminds us that courage is not necessarily about doing big things but instead can be an accumulation of small things,” says senior Serene Li.

As its name indicates, the seminar explores courage from theoretical and practical perspectives. The class meets weekly for two hours, and thus far, students have considered such topics as heroism, intellectual courage, motivation and purpose, the courageous mindset, and courageous decision-making. In coming weeks, Savage and her students will examine, among other topics, truth and courage; managerial, political, and military courage; and how to nurture courage in themselves and in others.

Readings for the seminar expound on various elements of courageous living (such as creativity and motivation), and students also explore personal stories, such as the experience of renowned Holocaust survivor Viktor Frankl, as told in his memoir, “Man’s Search for Meaning.” They keep abreast of current events while on the lookout for a potential “recipient” of the weekly Courage Award — which the undergraduates jointly decide on in each class. Their first recipient was former Acting Attorney General Sally Yates, who defied defending President Donald Trump’s executive order on immigration and was fired. Over the course of the semester, Savage also hosts for her students screenings of films that depict acts of courage (“Selma” is the most recent of these).

Jim Levinsohn, director of the Jackson Institute for Global Affairs, invited Savage to teach the “Courage” seminar while she was working on a book about the topic. She says she jumped at the opportunity.

“I had no idea that teaching was something I wanted to do, but when Jim invited me, it seemed like the best idea ever,” says Savage, who is a popular motivational speaker and personal coach. “I feel as though I’ve learned a lot about how to live a good life, mostly by making some ‘wrong’ choices first, and I really wanted to help my students shortcut some of those mistakes. I’m particularly happy that all but one of the students in the seminar are seniors; I have the chance to talk with them as they prepare to launch themselves into the world and start their careers.”

An Oxford-trained lawyer, Savage worked as a management consultant in her native England for more than a decade, but was unhappy with her career and manner of living. At the age of 36, she decided to write two obituaries for herself — one describing the life she likely would have if she remained on her path, the other describing a life she would rather have. Around the same time, she had also had an “environmental epiphany” while visiting Peru, where, she says, indigenous people stressed their belief that “if nature isn’t thriving then [humans] cannot thrive.” She began to read as much as she could about environmental issues, becoming very concerned about Earth’s future in the process.

“I became a woman on a mission to raise environmental awareness but didn’t know how I was going to do that,” recalls Savage. “Then, through a whole series of conversations, the idea came to me that I could row across the ocean and use that experience as my platform to raise awareness about the environment — through a blog and books and talks. It was a ridiculously audacious plan, far from anything that I’d done before.” 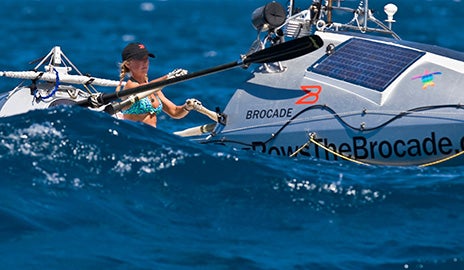 In her book “Rowing the Atlantic: Lessons Learned on the Open Ocean,” Savage describes how, in 2005, she became the first woman to complete the Atlantic Rowing Race, which required her to row 3,000 miles across stormy ocean, from the Canary Islands to Antigua, in a 23-foot-boat. The trip took 103 days, during which she rarely ever saw another boat. She rowed across the Pacific in three stages between 2008 and 2010, and across the Indian Ocean in 2011 — which, at 154 days alone at sea, was her longest journey. She describes her Pacific adventure in her second book, “Stop Drifting, Start Rowing: One Woman’s Search for Happiness and Meaning Alone on the Pacific.”

The Yale senior fellow says she learned a lot about courage, and herself, while crossing the Atlantic, an often-stormy journey during which all four of her oars broke before the halfway mark (she used duct tape to continue rowing with them) and she eventually lost her satellite phone. She also developed tendonitis in her shoulder.

“There was just so much self-doubt on that voyage, where I was wondering if I’ve bitten off more than I could chew,” says Savage. “My courage was tested so many times. … There were storms. I was scared to scrub the barnacles off the bottom of the boat. When you are alone in a small boat in the middle of the night on a very dark ocean, you can start letting your imagination run riot, and you have to sort of rein it in, do some thought management. Sometimes, 20-foot waves were looming off the back of the boat. There were times when I was saying, ‘Don’t look at the waves — too scary! —just keep looking at the compass.’”

The experience, Savage said, taught her that people find courage when their motivation exceeds their fear.

“The main message I want my students to take away from the class is that courage is not the absence of fear,” she says. “That’s fearlessness, which is often closely related to stupidity. Courage is feeling the fear and being able to do the thing anyway. Often, that will be because you are connected to some higher purpose, some cause that is bigger than your fears.

“One of the things we talk about in class is how we can have the choice to create constructive narratives about ourselves or we can create very self-limiting narratives,” she continues. “We talk about the courageous mindset, and how the process of trying and failing, and learning and succeeding, is often more meaningful than the results. In my own life, I know that I often learned the most about myself — and about courage — in the times when I was failing.”

The students’ weekly courage challenge, along with classroom conversations, are designed to help them think about what their own “default” behaviors and assumptions are. That self-awareness, Savage maintains, is one of the first steps of learning how to live a life of courage.

“When we decide we want to set a more courageous course, we have to change our inner narrative, develop a courageous mindset, and wire it into who we are,” she explains. “Before my sea voyages, I was not courageous at all, but out at sea, I put myself in situations where I had to be courageous — every day — for months on end. I was forcing myself in a situation where I was rewiring my mind to default to more courageous modes — and it really works!”

Yale senior Aaron Troncoso says being in Savage’s seminar has already helped him to embrace challenges more than he once did.

“I decided to take the class after the 2016 elections, which made me realize that courage— political courage, moral courage, social courage — will be required more than ever over the next few years,” he says. “I hope that this class will help me demand courage of myself and my actions every day, so that I don’t become complacent or inured to injustice and inequity. So far, it’s made me ask tough questions about whether I’m spending my time effectively, and has reminded me that every moment is an opportunity to push for real change on something I care about — whether it’s a personal habit or a political issue I care deeply about. The weekly ‘courage challenges’ have been especially helpful in that so far.”

Savage thinks the seminar is especially meaningful at this particular time in the world’s history.

“Learning about courage is important because when I look at the world, I see a lot of fear,” she says. “I see a lot of fear-based political campaigning and fear-based advertising. I want my students to be more resilient in the face of their own fears and attempts by other people to make them fearful. Fear leads people into dangerous ways of thinking. So while there are many reasons to be fearful in the world, reacting or responding with fear doesn’t really move us forward much. We need to take our fear and use it as an opportunity to find our courage. With this seminar, I feel like I’m recruiting a courage army, who will get out there and lead the way into a more courageous future.”