Any time is a good time for illumination by Frederick Douglass, says Yale historian

More than 30 years ago, Yale historian David Blight stood high atop a ridge near the Maryland coast and took in a view, the memory of which still awes him.

It was of the Chesapeake Bay in the summer, dotted with the white sails of boats, from a vantage point described more than 100 years earlier by the famed former slave, abolitionist, and orator Frederick Douglass.

His 1845 memoir, “Narrative of the Life of Frederick Douglass,” describes how the then-slave would visit this perch above the bay while living on the farm of slave master Edward Covey, who brutally beat the teenaged Douglass. “Those beautiful vessels,” wrote Douglass, “were to me so many shrouded ghosts, to terrify and torment me with thoughts of my wretched condition.” He continues, addressing the ships: “You are loosed from your moorings, and are free; I am fast in my chains, and am a slave! You move merrily before the gentle gale, and I sadly before the bloody whip! You are freedom’s swift-winged angels, that fly around the world; I am confined in bands of iron!”

While some have considered that passage as literary device, Blight’s own visit to the coastal ridge convinced him that Douglass described his true experience, the historian said during a public talk on Feb. 15 at a meeting of the Connecticut Academy of Arts & Sciences. The event was held at the Whitney Center in Hamden.

“I do remember what I thought that July day,” Blight told his audience. “I thought, ‘Oh my God, that’s not a metaphor. He [Douglass] did not make that up. He saw this!’”

The passage, Blight added, is “one of the most beautiful descriptions in all of abolitionist literature of the meaning of freedom.”

Blight visited the Covey farm when he was a graduate student at the University of Wisconsin-Madison. He had “boldly” contacted journalist Dickson Preston, who had just written “Young Frederick Douglass: The Maryland Years” and who offered to take Blight on a tour of some of the sites Douglass mentions in his autobiography.

His own interest in Douglass has endured long since that visit in the early 1980s, said Blight, the Class of 1954 Professor of American history and director of the Gilder Lehrman Center for the Study of Slavery, Resistance, and Abolition. His dissertation explored the impact of the Civil War on Douglass’ life; he edited Douglass’ second autobiography, “My Bondage and My Freedom; he has written a number of essays and introductions to books about Douglass (an article he wrote comparing the experience of Douglass as a fugitive slave to the experiences of current refugees recently appeared in The Atlantic); and he is currently finishing up a new biography of the former slave, to be published next year.

“I could never get him out of my life,” Blight told the audience.

However, before embarking on his biography-in-progress, he said, he had no intention of writing another book about Douglass. A chance meeting with a collector seven years ago in Savannah, Georgia, changed his mind. Walter Evans, a retired surgeon, has “one of the most important collections of African-American art anywhere in the world,” as well as a collection of African-American rare books and manuscripts and a collection of materials related to Douglass, said Blight. Evans invited Blight back to his home to look at that collection, which included large scrapbooks made by Douglass’ family members, family letters, and other materials.

“I couldn’t believe it,” said Blight. “Then Walter told me, ‘Hardly anybody’s used this collection.’ I did the scholar thing and said, ‘Who has?’” 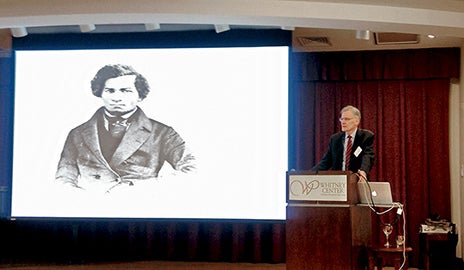 Over the past four years, Blight has researched the collection for his biography. He shared with his audience some basic details of Douglass’ life: his birth in 1818 in Maryland to a slave mother he barely ever saw and a white slave master whose identity he never knew. He lived 20 years as a slave, nine years as a fugitive slave who was subject to recapture, and then 40 years as a free man till his death in 1895. He became one of the most well-known abolitionists and orators of the 19th century.

While Douglass is mute about certain aspects of his life in his autobiographies (he barely mentions his wife and children, Blight pointed out), “one of the most beautiful and powerful elements of Douglass’ writing of his early life” was of his quest for literacy, said the Yale historian. He noted that when Douglass escaped Baltimore disguised as a sailor, the only possession he carried with him was a copy of the Columbian Orator, a book commonly used at that time to teach schoolchildren reading and speaking.

One of the items Blight discovered in Evans’ collection was a letter Douglass wrote just three months before his death, in which he describes hearing a phonograph for the first time in his life, a recording of a preacher friend. Douglass, said Blight, described it as  “a holy moment,” and the former slave couldn’t believe that a human voice had been recorded.

“I realized that he was expressing in the letter his own wish to be recorded. He was nothing except his voice. I love that letter for all it’s worth,” said Blight, noting that no recording of Douglass has ever been known to exist.

Today, Douglass’ life still can shine light on contemporary questions, Blight said. He posed some of them to the audience: How do you go from being a radical critic of a system — and condemning the leadership of a nation or society — and later join that leadership? How does one square a belief in the creeds of a particular society (such as the Declaration of Independence) with the politics of a society that enslaves your people? How do you deal with — and exploit — fame? How does victimization, including racism and poverty, impact a person?

“Douglass had scars,” said Blight. “He had physical scars from the beatings he took and he had lots of emotional scars. … He was damaged by slavery. … He could be a ferociously angry man and it tended to come out in his language.”

“Language can become a way to process pain, damage, scars,” said Blight. “Read the autobiographies and you will find passages that you would think were in yesterday’s newspapers, whether that subject was voting rights, civil rights, modernity, the meaning of America, the 14th Amendment, the idea of equality, and, how do you overcome a past of slavery, or poverty, or worse? His language lives.”

In his speeches Douglass conjured biblical imagery of rebirth and equated it with the U.S. experience of Reconstruction after the Civil War. Blight suggested that the former slave’s metaphors of rebirth even rivaled Lincoln’s in his Gettysburg address.

“If you need language to help you find meaning in what you’re experiencing, Douglass is one of the best places to go,” Blight concluded.