Next fall Yale will welcome students to Pauli Murray College, one of the two new residential colleges under construction. Meanwhile, the family home of Murray ’65 J.S.D., ’79 Hon. D.Div. — an alumna and a groundbreaking civil rights activist, lawyer, educator, and Episcopal priest for whom the college is named — was recently designated a National Historic Landmark by the U.S. Department of Interior and the National Park Service.

The house, at 906 Carroll St., was built circa 1898 by Murray’s grandfather, Robert Fitzgerald, who was a Union Civil War veteran. Murray (1910-1985) was a descendent of both slaves and slaveholders. Fitzgerald, who was black, went south to teach reading, writing, and citizenship to newly emancipated African Americans. In her 1956 memoir, “Proud Shoes: The Story of an American Family,” Murray wrote: “To his family, [the house] was more than a home; it was a monument to Grandfather’s courage and tenacity.” Though he had lost his sight from war injuries, Fitzgerald supervised every aspect of the home’s construction by touch.

In its press release, the Department of the Interior noted that Murray “served as a bridge figure between social movements through her advocacy for both women’s and civil rights. Her efforts were critical to retaining ‘sex’ in Title VII, a fundamental legal protection for women against employment discrimination. After decades of work for black civil rights, her vision for a civil rights association for women became the National Organization for Women (NOW).” 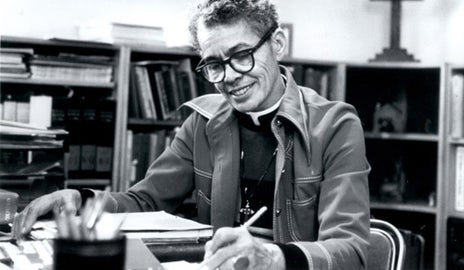 Murray graduated from Hunter College in 1933. Later, she began an unsuccessful campaign to enter the all-white University of North Carolina. Murray’s case received national publicity, and she became widely recognized as a civil rights activist. She co-authored the book “States’ Laws on Race and Color” (1951), which the Supreme Court Justice Thurgood Marshall called the “bible” of the civil rights era.

The National Historic Landmark Designation for the activist’s childhood home “recognizes Pauli Murray as the nationally significant human rights champion she was,” said Mayme Webb-Bledsoe, board chair of the Pauli Murray Center for History and Social Justice. “Our goal is a visitor-ready historic site in 2020 focused on history, arts, education, and activism, where learning and thoughtful discussion that advances Pauli’s vision for an inclusive America takes place.”

The nomination of the Pauli Murray Family Home was a collaborative effort of the Pauli Murray Center for History and Social Justice, the Paul Murray Project (an initiative of the Duke Human Rights Center), the National Collaborative for Women’s History Sites, the National Trust for Historic Preservation, and Fearnbach History Services. National Historic Landmarks are nationally significant places deemed by the secretary of the interior to possess exceptional national historic value.

“The National Historic Landmark designation sparks support for our work to connect histories of women, African Americans, and LGBTQ folk that are often invisible with activism focused on today’s issues of justice and equity. We want to positively impact the community and nurture the next generation of Pauli Murrays,” said Barbara Lau, director of the Paul Murray Project.