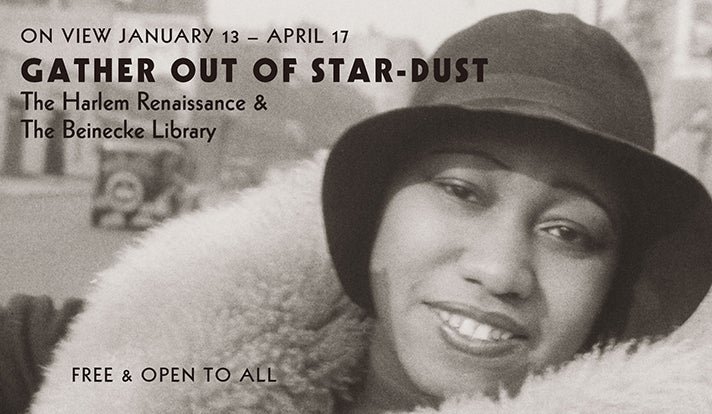 “Gather Out of Star-Dust: The Harlem Renaissance & The Beinecke Library,” a major building-wide exhibition, is on view Jan. 13–April 17 at the library, 121 Wall St.

The Harlem Renaissance was a time when “African American cultural and intellectual endeavor surged into the American mainstream,” writes exhibition organizer Melissa Barton in a companion volume forthcoming from Yale University Press.

In the near-century since it began, the Harlem Renaissance has captured the American popular imagination, eliciting ongoing critical and public interest, says Barton, curator of prose and drama in the Yale Collection of American Literature (YCAL).

Beinecke’s exhibition, Barton emphasizes, “seeks to return us to the documents, photographs, artworks, and objects that have generated this tremendous response of scholarship, inquiry, and homage.”

The Beinecke show features more than 300 artifacts from the library’s James Weldon Johnson Memorial Collection (JWJ) of African American Arts and Letters and is part of the 75th anniversary celebration of the collection’s founding in 1941. The JWJ Collection overall holds over 13,000 volumes, 3,000 pieces of sheet music, countless pages of manuscripts, correspondence, photographs, and ephemera, as well as 11,000 digital images. It is one of the most-consulted collections at Yale.

“Gather Out of Star-Dust” also features the work of writer and photographer Carl Van Vechten, a patron of the Harlem Renaissance and Johnson’s close friend. Van Vechten established the JWJ Collection at Yale in association with Grace Nail Johnson as a memorial to her husband after his death in 1938. More than 50 of Van Vechten’s portraits of Harlem Renaissance and related cultural leaders are on view in the Beinecke exhibition.

Among the many highlights of the show is the original artwork of E. Simms Campbell’s 1932 map of Harlem nightclubs. Campbell was the first African American illustrator to be syndicated, and his work was featured regularly in national magazines. His map provides a “who’s who” guide of the nightclubs that drove Harlem nightlife during and after Prohibition, including the Savoy Ballroom, the Cotton Club, and Gladys’s Clam Bar.

Interactive touchscreens in the exhibition allow visitors to hear sound recordings of the era and explore the collection further.

A companion show, “Caricature Assassination: Miguel Covarrubias Murders New York” — organized by Nancy Kuhl, curator of poetry in YCAL — will also be on view at the Beinecke Jan. 13–April 17.

Covarrubias, who arrived in New York City from his native Mexico in 1923, sketched some of New York’s most famous writers, actors, editors, athletes, and politicians, including key figures of the Harlem Renaissance. “Covarrubias’s drawings, published in the city’s most popular magazines, were so much a part of the cultural moment that they came to shape New York’s image of itself even as they documented it,” Kuhl notes.

Barton says the Harlem Renaissance “has long raised some of the best questions about culture and its purpose: What is beautiful? What is good? What is it for? Who owns it? Can art change the lives of those who are poor and suffering?”

“Beinecke’s ‘Gather Out of Star-Dust’ brings these questions and criticisms back to the materials. It shows the complexity of the era through the juxtaposition of its artifacts,” she states. “We invite the public to ask their own questions as they simultaneously remember, reflect, enjoy, and find their own answers.”

E.C. Schroeder, director of the Beinecke, says the exhibition appropriately celebrates the complementary acts of both creativity and collecting. “The Harlem Renaissance was a key moment in the development of archives of African American writers, artists, and activists. Contemporary scholarship, and the Beinecke Library’s collections ensure their work and leadership are a living legacy from which students, scholars, and the public draw inspiration in the present for the future.”

The library’s spring readings, gallery talks, and other events include many programs related to the Harlem Renaissance and the JWJ Collection. More information can be found by visiting the library’s website, by following Beinecke on Facebook and Twitter, and by subscribing to the Beinecke’s events and news email list. Visitors are encouraged to use and follow the hashtag #HarlemRen on social media to share stories about the exhibition and related events.