“He’s suffered some serious blood loss,” said Maxwell Emerson, gesturing at the torso of a medical mannequin on the table in front of him. “We need to close this wound and administer some fluids before the next group gets here,” he said, pouring water dyed red into the tube connected to the mannequin’s neck.

Emerson’s station — wherein students perform medical procedures on a mannequin, inserting an IV and suturing a wound — was one of four presented during a “lab day” for the class “Medical Device Design and Innovation” (MENG 404). Other stations included collecting patient vitals, removing a brain tumor, and performing laparoscopic surgery.

Throughout the semester, students work with physicians at the Yale New Haven Hospital (YNNH) to develop novel medical devices that address unmet clinical needs. Current and past projects include transporting organs for transplantation, drawing blood samples from infants, and reducing the pain of earwax extraction from children.

“The lab day was a chance to introduce students to some of the technologies that are used in common medical procedures,” said Emerson MS ’15, a  CEID design fellow and MENG 404 alum. The device Emerson and his team in the class developed, a pacemaker simulator, is still being used to train clinicians at YNNH. “It’s really important for the designers and engineers of these medical devices to understand the current state of the art, as well as the challenges physicians might face when operating a device or performing a procedure.”

MENG 404 is one of several engineering classes hosted at the Center for Engineering Innovation and Design (CEID) that emphasize hands-on learning. While classes like these existed within the School of Engineering & Applied Science (SEAS) prior to the CEID, the center’s blend of classrooms and lab spaces facilitate learning in a way that traditional classrooms and labs cannot.

“One of the advantages of having classes at the CEID is the openness of the center itself — the lecture room is directly connected to the studio, so there’s a sense of collaboration and intrigue,” said Vincent Wilczynski, director of the CEID and deputy dean of SEAS. “Students love to learn new material, but they also love to apply that new knowledge, and those creative desires are met by term projects in CEID courses.” 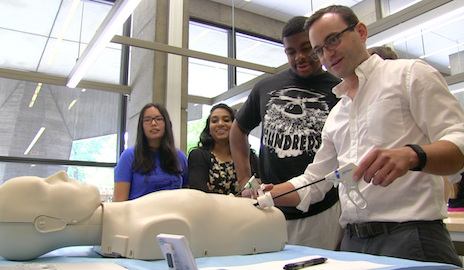 Joseph Zinter, assistant director of the CEID who created and teaches MENG 404, said he enjoys “using the classroom as a platform to tackle real-world challenges.”

“Having a transplant surgeon visit with our students just after performing a life-saving procedure and saying to them ‘I need your help developing technologies to save lives’ creates an environment where students feel a tremendous sense of purpose and opportunity,” Zinter said.

“I consider it a great privilege…to meet with physicians in their clinical settings to gain invaluable insight and access to the tools they use every day and would like to improve,” said Alyssa Siefert, Engineering Director at the Yale Center for Biomedical and Interventional Technology (CBIT), who started as co-instructor for MENG404 this year. CBIT has partnered with MENG404 since its inception three years ago. “I’m very excited to see the prototypes that…the students will deliver!”

Currently, the CEID hosts classes in mechanical, electrical, biomedical, chemical, and environmental engineering, and the topics range from creating a novel medical device to constructing a new musical instrument to developing ways to better treat wastewater.

“Before, many of these classes didn’t exist in the form we have now, where a homework problem isn’t just an answer on a sheet of paper, but an object that demonstrates principles,” Wilczynski said.

With Larry Wilen, design mentor and senior research scientist at the CEID, Wilczynski co-teaches “Engineering Innovation and Design” (ENAS 118), a class that introduces underclassmen to all the engineering and applied science disciplines through lab components that illuminate a specific technical area within each field. The culmination of these lab components is an automatically controlled thermal system that tempers chocolate.

Wilczynski is quick to dismiss the notion that CEID classes have sacrificed academic rigor for the entertainment of constructing novel devices or tempering chocolate. He believes that hands-on learning and academic rigor go hand-in-hand.

Frequently, the real-world applications of these classes don’t end when the semester does. The final project of ENAS 118 is a design challenge given to students by other clients at Yale, like the Yale Farm, the Yale University Art Gallery, and the Yale Peabody Museum. Students design, manufacture, and test their solutions, working not just for their grade in the course, but also for the Yale community at large.

End-of-term course evaluations for CEID classes support the center’s fusion of rigor and fun: While students frequently rate the classes as “very good” and “excellent,” they also note that the workload is “greater” or “much greater” than other classes at Yale.

“I have friends who had taken MENG 404 before who raved about it, consistently citing it as a favorite,” said Caroline Jones ’17, an economics major currently enrolled in the class. “The consensus was that it was a difficult but rewarding class where you learn something new every day.”

Older students recall the opening of the CEID as a watershed moment for engineering classes and majors.

“I think there was a big shift within the engineering major [with the opening of the CEID],” said Levi DeLuke ’14, a mechanical engineering major. The CEID opened in 2012, the beginning of DeLuke’s junior year. “The core classes didn’t change too much, but now there are all these really cool electives.”

“It encouraged people to take more engineering classes,” said Ellen Su ’13, an art major who spent the year after graduation as a design fellow at the CEID. “I think there were a lot of classes before the CEID where people wanted to like it, but it just wasn’t that exciting or engaging. The CEID changed that.”

To learn more about the classes offered at the CEID, visit its website.