Even though it’s only four years old, the Center for Engineering Innovation and Design (CEID) already has an impressive résumé of nurturing startups.

In just the last few years, the CEID has helped launch PremieBreathe, a low-cost infant respirator that seeks to prevent the respiratory complications that claim the lives of 1.5 million infants each year, especially in low- and middle-income countries; Wellinks, a clip that measures the tension in the straps of back braces worn by youngsters with scoliosis; Khushi Baby, a digital necklace that contains an infant’s complete vaccination history; an as-yet-unnamed device that aims to make notoriously painful bone marrow biopsies virtually painless; and more.

Related story: A Khushi Baby is a healthier baby, thanks to Yale entrepreneurs

Each of these projects is in a different stage of development, from early testing to a fully-blown company backed by grants and investments, but each started within the CEID’s window-lined walls at 15 Prospect St.

“If the CEID didn’t exist, the company probably wouldn’t exist,” said Levi DeLuke ’14 of Wellinks, the start-up he founded with Ellen Su ’13. DeLuke, a mechanical engineering major, and Su, an art major, created a clip that monitors the tension of the straps on the back braces worn by kids with scoliosis. The clip allows kids to put on their braces independently (it vibrates when the strap has reached the appropriate amount of tension), meaning they are more likely to wear the braces and less likely to miss class due to the need for assistance. In addition, Wellinks comes with an app that provides parents and doctors with comprehensive data about the child’s use of the brace.

“There was a lot of research coming out saying that the braces were effective if worn properly, but that kids weren’t wearing them and doctors couldn’t keep track of it,” Su said.

DeLuke had scoliosis — a condition in which a person’s spine has a sideways curve that most often appears between ages 10 and 20 — as a child, so he and Su decided to make that the focus of their CEID summer fellowship during the summer of 2013.

“We wanted to see what we could accomplish by just working full time on this one project,” Su said, noting that it can be difficult for students to fully commit to a project while also juggling classes and other extracurricular activities. “The CEID’s summer fellowship allowed us to do that.”

Wellinks has secured public and private investments from around Connecticut, including Yale and the city of New Haven, allowing DeLuke and Su to work on it full-time since graduating. They credit the CEID, however, for getting the project off the ground. 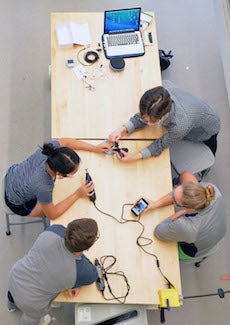 “At the CEID, we were able to do the 3-D printing, the electronics, the milling of the cases, everything,” DeLuke said, recalling how he and Su started by “hacking open a luggage scale, taking those sensors with an open-source Arduino and making a prototype” — all at the CEID.

Su and DeLuke met while founding the Yale chapter of Design For America, in which interdisciplinary student teams at universities across the country use design processes to address challenges in local communities. Yale’s chapter uses the CEID as its homebase. Other Yale teams have met through classes, other extracurricular groups, or simply by spending many hours alongside fellow students in the CEID’s ample study and workspaces.

Brown had been interested in finding a way to reduce the pain of bone marrow biopsies for a few years before he got involved with MENG 404.

“[Withdrawing bone marrow] is really just barbaric,” Brown said. “First, we have to drill into the bone, usually without localized anesthesia, which is basically the same thing as a common form of medieval torture. Then, we aspirate bone marrow into the needle, which patients say feels like their bone shattering like glass.”

The worst part, Brown added, is that bone marrow biopsies are most commonly done to diagnose blood cancers. “So not only are they going through this painful procedure, they’re dealing with the thought that they might have cancer,” he said.

In fall 2015, Brown took his idea to Joseph Zinter and then-Engineering Director of the Center for Biomedical and Interventional Technology Jean Zheng, who co-taught MENG 404 that semester. Thomson, who was enrolled in the class, asked to be part of Brown’s team.

“From that point, the CEID has been the home of our engineering efforts,” said Thomson, who studied biomedical engineering. The pair created a device that “will be the first painless bone marrow biopsy device that will also increase the diagnostic sensitivity of the sample … and reduce procedure time by consolidating steps.”

While the device does not yet have a name — it is undergoing review for intellectual property rights — it has had a few successful trials on pigs, clearing the way for potential future human trials and approval by the FDA.

“It’s amazing how far this project has come in just one year,” Zinter said.

In addition, Thomson and Brown have won a CT Innovations Bioscience Pipeline prize and have several other funding opportunities in the works to support the project.

“[The CEID] was the base for our prototyping, design development, and bench-top testing,” Thomson said of the development process. “The resources and faculty there significantly expedited our development and gave us the facilities to develop this novel device.”

Vincent Wilczynski, director of the CEID and deputy dean of the School of Engineering & Applied Sciences, credited the open nature of the CEID for helping projects like these thrive. Whether a student’s project starts in a class, a childhood memory, or a random curiosity, the CEID “has no bounds,” he said.