Yale’s four professional schools in the arts — art, drama, architecture, and music — drive the vibrant and wide-ranging creative community that distinguishes Yale from other major universities, Yale President Peter Salovey told the annual assembly of the Yale Alumni Association (AYA) during his keynote address on Nov. 10 in Sprague Hall.

“The arts are perhaps the signature strength of this university,” said Salovey ’86 Ph.D.

This year’s assembly, titled “Teaching to Our Strengths,” allowed alumni delegates to see for themselves the programs, facilities, faculty, and students that make each of the professional schools among the leaders in their respective fields. It is the first assembly since Weili Cheng ’77 became AYA executive director.

Salovey described the importance of university’s creative environment in his own decision to remain at Yale after earning his doctorate in psychology.

“I wanted to study and work in an academic environment at a university that prizes the arts,” Salovey said. “Why? It creates a different vibe among the students. It creates greater intellectual diversity among the faculty. It ends up being a catalyst for creativity on campus. And, of course, I can come to this very auditorium almost every night of the week and hear wonderful music or visit the Yale Rep and see great theater.”

“They recognize what the presence of these four incredible professional schools in the arts and everything associated with them does for the environment on our campus and in our city,” he said.

Following Salovey’s keynote, the deans of the professional schools in the arts provided an overview of the work and teaching that occur within their institutions every day.

Marta Kuzma, dean of the Yale School of Art, emphasized the school’s tradition of critical practice — its 127 students are encouraged to produce and subject their work to intensive critique by the school’s faculty, which is composed of distinguished artists in painting, graphic design, sculpture, and photography.

Founded in 1869, the Yale School of Art is oldest professional art school in the nation. Kuzma, whose tenure as dean began in August, is the first woman to lead the school.

Kuzma quoted a former student of the late Robert Reed, a painter and cherished faculty member, to underscore the affect of the school’s tradition of critical practice and engagement between faculty and students on the development of artistic talent.

“Robert didn’t simply teach me to draw, instead he taught me how to see so that I could then teach myself to draw,” the student said.

Kuzma discussed efforts to provide more opportunities for students to exhibit their work with the general public and to develop curriculum designed to get students engaged in the nation’s political discourse.

James Bundy, dean of the Yale School of Drama, emphasized the importance of the Yale Repertory Theater in providing students the opportunity to work directly with leading artists in the field to stage theatrical productions, comparing it to the working relationship between physicians and medical students at teaching hospitals.

“We’re really training people for leadership in the theater around the world,” he said.

Bundy, who was appointed to his fourth term as dean last month, said Yale is the sole school in the country that trains its students in all disciplines of theater, including acting, set design, playwriting, stage management, and theater management.

Among the Yale Reparatory Theater, the School of Drama, the student-run Yale Cabaret, and other theater organizations throughout Yale, more than 250 theatrical productions occur on campus every year.

“It is clearly the most enriched theatrical environment in the United States,” Bundy said.

Deborah Berke, dean of the Yale School of Architecture, described the school’s building on the corner of Chapel and York streets as the place “where the lights are always on.”

She emphasized the school’s “studio culture” in which students freely engage with faculty members and one another, trading ideas and offering critiques.

“Among all the architectural schools that are our competitors, we are far and away the most collegial,” she said. “We disagree often on content but always respect and encourage conversation and exchange.”

Berke, founder of the New York-based design firm Deborah Berke Partners, arrived on campus in July to succeed Robert A.M. Stern as dean. She had served as an adjunct professor of architectural design at Yale since 1987, and is the first woman to lead the school.

Berke said she aims to build on her predecessor’s success by emphasizing sustainability in the face of global climate change; enhancing engagement in urban studies and design; expanding interdisciplinary work with other institutions and academic departments at Yale; and increase the number of scholarships for students, “so that architecture looks like the population it is meant to serve.”

Robert Blocker, the Henry and Lucy Moses Dean of the Yale School of Music, said music plays an integral role in the Yale community.

Blocker urged assembly participants not to view the school as a conservatory in which its students are sheltered from the rest of campus.

“I have spent 20 years trying to push the school into the bloodstream of the university,” he said. “We are not a conservatory. We are a professional school whose strength is embedded in Yale University.”

Students are expected to arrive with the necessary background to become great artists, Blocker said.

“We are going to prepare them to be cultural leaders,” he said. “We want them to feel with their brain and think with their heart. That’s the kind of training we want to provide.”

Following the deans’ presentations, participants in the assembly had opportunities to visit with students and faculty at each professional school. They had the chance to tour facilities, including the School of Music’s Adams Center for Musical Arts on Elm Street, which is still under construction and encompasses renovations and a major addition to Hendrie Hall. They could attend a calligraphy workshop at the School of Art; a rehearsal at the Yale Rep; and tour Randolph Hall, the School of Architecture’s flagship facility, among other activities.

Two alumni and two current students were honored at the Yale-Jefferson Public Service Awards ceremony. The award recognizes those who inspire the Yale community through innovative, impactful, and sustained service for the greater good. This year’s recipients were Evan Wolfson ’78, Dan Rubins ’16, and Zlatko Minev ’14 M.S. (applied physics), ’15 M.P.H. (engineering and applied physics). Also honored at the ceremony was Sophia Sanchez-Maes ’19, recipient of a Jefferson Award for Outstanding National or Global Service by a Young American 25 or Under. (Read related story.) 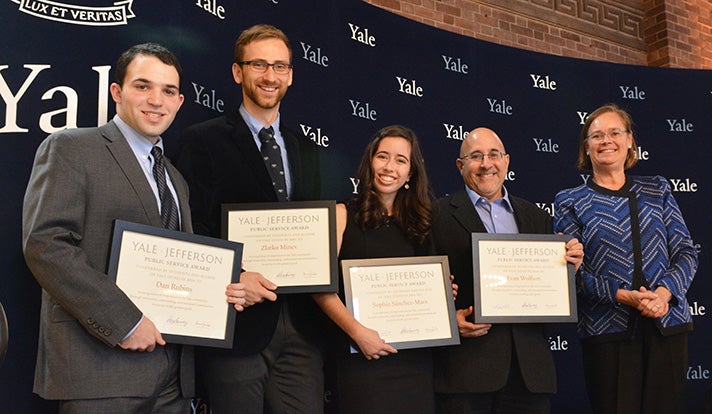