As a volunteer last year for the New Haven Science Fair, Yale junior Cesar Garcia Lopez traveled periodically with first-graders to the Quinnipiac Meadows Eugene B. Fargeorge Preserve in New Haven to explore the biodiversity of the salt marsh. The students he mentored from Conte West Hills Magnet School won a first-place prize in the fair’s biological sciences category for their research on the habitats of snails in the marsh.
By Susan Gonzalez
Share this with Facebook Share this with Twitter Share this with LinkedIn Share this with Email Print this

As a volunteer last year for the New Haven Science Fair, Yale junior Cesar Garcia Lopez traveled periodically with first-graders to the Quinnipiac Meadows Eugene B. Fargeorge Preserve in New Haven to explore the biodiversity of the salt marsh. The students he mentored from Conte West Hills Magnet School won a first-place prize in the fair’s biological sciences category for their research on the habitats of snails in the marsh.

“It was cool to bring them out to the salt marsh,” says Garcia Lopez. “A lot of the students live nearby but had never been there. They were really excited about it.”

This year, he is again teaming up with Conte School first-graders to help them discover how the biodiversity of that same salt marsh compares with that of a local park, along the way sharing with them the reasons it is important “to preserve ecosystems in their natural state,” he says. The students’ research will be part of this year’s citywide science fair.

For his efforts to inspire others about environmental conservation, particularly ocean conservation, Garcia Lopez received a Lider del Futuro (Leader of the Future) Award from Monterey Bay Aquarium in California during its annual Fiesta del Mar celebration on Oct. 18. The award honors an individual of “the next generation who will be responsible for the administration of our oceans,” according to the aquarium.

The Yale student, who is majoring in ecology and evolutionary biology, recently spoke with YaleNews about his interest in environmental conservation. Here is what we learned.

Expanding his view: In his sophomore year at his high school in Watsonville, California, Garcia Lopez had to choose which of the school’s seven academies to enroll in based on his interests. He first thought about joining the one focusing on engineering, but a teacher who gave an enthusiastic presentation about the Environmental Sciences and Natural Resources Academy (ESNR) inspired him to take a chance on an area of study he knew little about.

Lopez Garcia was also impressed by the presentations given by ESNR students who had participated in the Watsonville Area Teens Conserving Habitats (WATCH) Program, which is hosted by the Monterey Bay Aquarium. In this program, high school students explore the Pajaro River Watershed, meet with local scientists, and participate in inquiry-based learning as they examine environmental issues in their community and participate in local restoration efforts.

Later, as a WATCH participant, Garcia Lopez was part of a team that investigated the erosion caused by tides in Elkhorn Slough, an estuarine research reserve near Monterey Bay. In addition to doing fieldwork in the wetlands, he and his peers presented their findings to the local community in Watsonville and at the Monterey Bay National Marine Sanctuary Currents Symposium, a yearly event for scientists, educators, students, and the public to learn about research being conducted in the sanctuary.

Further afield: These experiences, along with an internship conducting plant ecology and evolutionary biology research with doctoral students at the University of California- Santa Cruz (UCSC), convinced Garcia Lopez that he had chosen the right path.

“Once I had my first view of ecology and environmental sciences in high school, I was able to do some awesome things and discovered other great opportunities, “ says Garcia Lopez.

Born in Mexico, Garcia Lopez came to the United States at age 6 with his parents, who worked in agriculture in Watsonville, a coastal town in central California mostly known for its berries. He and his older brother, Edgar, now a student at Brown University, participated in the Watsonville Ivy League Project in high school, which took them on a week-long trip to visit campuses on the East Coast.

During his visit to Yale, Garcia Lopez and his high school peers spent a large share of their time at La Casa Cultural Julia de Burgos, the Latino cultural center on campus.

“Everyone there was really welcoming, and just seeing the presence of a Latino community on campus was very valuable,” says Garcia Lopez. “Students at La Casa call the center ‘a home away from home,’ and during my high school visit, I really saw a glimpse of that. It opened my mind to what’s outside of Watsonville and outside of California, where I first thought I’d attend college.” 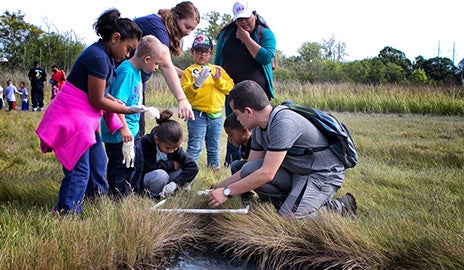 “For me, having the MAS Familias community was very useful at the beginning of my time at Yale, and I’d like to be able to help the organization grow and provide similar support to other people,” says Garcia Lopez, who is now president of the student organization.

Garcia Lopez works in the laboratory of Peabody Museum of Natural History Director David Skelly, where he is studying how suburban landscapes affect frog morphology. He utilizes the museum’s vertebrate zoology collection in his research.

Environmental experience worldwide: Garcia Lopez also has taken advantage of other opportunities to continue exploring the fields of ecology and environmental conservation. The summer after his freshman year, he traveled to Serengeti National Park in Tanzania to examine the impact of humans on wildlife, and this past summer he traveled to Panama to research the chytrid fungus, an infectious disease that affects amphibians worldwide. That was his second trip to Panama; in high school, he conducted research with a USCS professor on fungal decay in trees.

“This will be a very field-based experience to learn the practices of communities there that are living sustainably,” says Garcia Lopez. “I’m beginning to become interested, in a very broad sense, in how we can move toward more sustainable practices in our country.”

Conflicts of interest: In fact, Garcia Lopez hopes one day to put to use the knowledge that he is gaining at Yale and elsewhere in his home community of Watsonville, where there is a longstanding conflict between environmentalists and the agricultural industry.

“Growing up, I always saw a constant battle over agriculture and the wetlands,” he explains. “The environmentalists wanted to protect the wetlands, and they were pitted against the people who are dependent upon an agricultural lifestyle. I’m interested in how we might work together to ensure environmental protection for the wetlands but also make sure that people in our community can make a living. I believe that we can all work together to become more sustainable.”

The Yale junior hopes to enroll in the five-year program at the Yale School of Forestry & Environmental Studies with the goal of earning a Master of Environmental Management degree. This program accelerates the master’s degree by integrating graduate requirements in the undergraduate curriculum. Garcia Lopez hopes to have a career that combines environmental education and field research, and imagines himself returning to the Watsonville area one day.

“I’d love to be able to provide environmental learning opportunities for others who, like myself, might not have had them at a young age,” says the Yale student.  “I’ve enjoyed working with the kids at Conte School, showing them how they can do research so close to home.”

In the meantime, Garcia Lopez has also enjoyed taking such Yale courses as “Environmental Politics and Law,” “Yellowstone and Global Change,” and “Environmental Inequalities.”

“My mom recently visited campus, and it’s definitely a different world for us out here [on the East Coast],” says Garcia Lopez. “It’s a struggle in ways to be far from home, but I think it’s really worth it. People ask my mom if she’s upset that my brother and I are far away, but she says she knows it’s good for us — that we are making our own future.”