Having returned from European tours, singing groups join together for a local concert

Two Yale signing groups that each had European tours this summer will host a joint concert in November to continue building community ties. 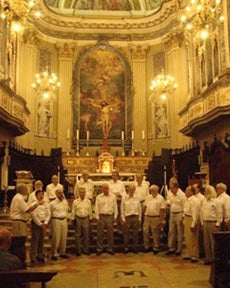 The Yale Russian Chorus Alumni, which participated in the yearly Verona Garda International Choral Festival in Italy in July, and the Yale Slavic Chorus, which toured Georgia this summer, will perform on Saturday, Nov. 12, at 7 p.m. in the sanctuary of the Whitneyville Cultural Commons, 1253 Whitney Ave., Hamden. Contact Robert Sheiman at 203-780-8890 or email admin@whitneyvilleculturalcommons.org for more information about the event.

A musical intermingling: The Russian Chorus Alumni group saw its trip to the Verona Garda International Chorus Festival as an opportunity to come together with others as musicians and friends and to continue the tradition of musical ambassadorship. The Yale Russian Chorus was founded at the height of the Cold War in 1953 by Denis Mickiewicz, a native Russian graduate student in the Yale School of Music, and George Litton, president of the undergraduate Russian Club. The chorus established a prominent place in the pantheon of Yale singing groups for its mastery of a unique repertoire of liturgical and secular music from Russia and neighboring lands.

A chief aim of the group’s mission is to engender international understanding through “musical ambassadorship,” and the chorus has made dozens of tours in its 63-year history, including 15 to the Soviet Union. Among these was a groundbreaking first private U.S. tour to Moscow in 1958, where the group sang in official concerts as well as before ordinary citizens on street corners.

Of the trip to Italy, Yale Russian Chorus Alumni member Ernst Schoen-Rene said, “To be surrounded at the festival by the singing of so many different groups was a delight, and although none was as long-lived as the Yale Russian Chorus Alumni, their variety and cleverness of presentation — French Canadians singing Cole Porter songs and getting others to dance along with them, Hungarians celebrating Bartok, Italians singing Verdi songs and arias — added to our sense of being surrounded by engaged and vibrant musical groups.”

Learning from masters: According to Amanda Crego-Emley, current director of the Yale Slavic Chorus, the trip to Georgia was a learning experience for her group.

“The Slavs, as we are affectionately known, have an extensive repertoire that spans the musical traditions of Bulgaria, Russia, Ukraine, and other Slavic nations. Georgian music entered the Slav’s repertoire in the early 2000s, and this study tour to Georgia was the choir’s first opportunity to learn on-site from Georgian musicians and masters.”

The Yale Slavic Chorus is Yale’s oldest women’s organization. Founded in 1969 in the first year of coeducation by Yale Russian Chorus member Bill Robbins, the chorus is composed of current undergraduate women.

Crego-Emley shared one story from the trip to Georgia that describes what happened when the group took a wrong turn on its way to a local monastery. The lost travelers were quickly invited into the home of an elderly woman.

“She offered us coffee — which actually meant, we discovered, a feast of freshly baked bread, homemade wine and cheese, vegetables picked from her garden, gorgeous strawberries, and, finally, some coffee,” says the Yale student. “We sang to her as thanks for her generosity — together we made toasts to family; to the strength of women; to peace; to the beauty of sky, earth, and vineyard. Amazed by her kindness, awed that she would open her home to a group of 10 strangers, we celebrated our shared humanity. Throughout our tour, people eagerly shared with us their songs, their stories, their food, and their history.”

Crego-Emly says that the group returned to New Haven with “a trove of new repertoire and techniques,” as well as a deeper appreciation for the cultural and historical sources of the music the Yale Slavic Chorus sings.

“Slavs is much more than just a singing group: it is a musical family, rooted in a tradition that transcends even Yale,” she says. “As our tour reminded us, our songs embody poignant human stories, and singing them is as instructive as it is fulfilling.”

Anyone interested in auditioning for the Yale Slavic Chorus or learning more about the upcoming concert with the Yale Russian Chorus Alumni can contact the group at slavicchorus@gmail.com.