In his everyday life, Dr. Adam Berkwitt is an assistant professor of pediatrics at Yale School of Medicine and a pediatric hospitalist at Yale-New Haven Children’s Hospital. But during the weekend of Oct. 15-16, he will take on a new role as “Dr. Bob Barker,” emulating the famed game-show host.

That weekend, Berkwitt will debut a new game he has developed for City-Wide Open Studios (CWOS), the nearly month-long New Haven arts festival, which this year has as its theme “Game On!” Berkwitt’s game, “Dr. Plinko,” is modeled after “The Price Is Right” — once hosted by Bob Barker and now by Drew Carey — in which contestants guess the price of consumer products, earning chips for their correct answers. In that televised game, they then have the opportunity to win up to $50,000 by dropping the chips on a pegboard in a game called Plinko (named for the plinking sound the chips make as they fall).

In Berkwitt’s game, however, rather than guessing the prices of consumer products like blenders and icemakers, contestants will earn Plinko chips for correctly guessing the prices of various over-the-counter medications and medical items. In fact, they will guess the prices of these objects twice: once on the price consumers would pay at a store like Wal-Mart, and then on the price a hospital would charge for the item. These include, for example, a container of Vitamin C tabs and allergy medications. (Don’t cheat by looking up prices if you intend to play, warns Berkwitt.)

As part of the “Dr. Plinko” game at CWOS, contestants will also use a 13-foot Plinko board to “learn” their insurance status (insured or uninsured) and also (for purposes of the game) whether they are healthy or have a particular illness, such as heart or kidney disease.

Berkwitt hopes those who play during the demonstration at CWOS will become a bit more knowledgeable about the high costs of healthcare.

“Players will learn the difference between the price of over-the counter medications and what the hospital charges for them, which is eye-opening,” says the Yale doctor, adding that they will also discover, through the game, the monthly costs of having a moderate to severe illness and learn about the impact of medical debt.

Berkwitt says he created the game after hearing the theme of this year’s CWOS, which he usually attends every year. After his game proposal was accepted by Artspace, which hosts the arts festival, the Yale physician began working with artist Phil Lique, who helped design some of the elements of the game board and also created a game show “set” as part of the CWOS installation.

“He helped make it feel like a game show,” says Berkwitt, who also had research and other support from resident physicians, and help with carpentry from Scott Schuldt, the CWOS Alternative Space manager and co-curator. Eamon Duffy, a Yale medical student and state representative for the national group Doctors for America, has also been involved in researching and plans to participate in the performance of the gameshow as well.

Berkwitt says “Dr. Plinko” combines two of his interests: his love of television games and his burgeoning interest in the cost of healthcare.

“I was obsessed with games like ‘The Price Is Right’ and ‘Supermarket Sweep’ as a child,” he says. “As a six-year-old, I didn’t really understand anything, but I could tell you the price of a refrigerator. I was kind of infatuated with the pricing of objects, and I liked the fantastical nature of ‘The Price Is Right.’ It was a fun game to watch. It would be true to say that I was a game fanatic.”

After earning an undergraduate degree from Hamilton College, where he majored in economics, Berkwitt attended medical school at the University of Connecticut. While he has worked as a pediatric hospitalist for six years, he says he is still baffled by the healthcare economic system.

“With the Affordable Care Act, there is a big emphasis on value-based medicine and high-quality care, which is good,” says the Yale doctor. “There’s also been a shift toward transparency in medicine and in increasing consumer awareness. But even with this increasing transparency, it’s difficult to understand where these prices come from. Who profits? I think the ‘Dr. Plinko’ game is kind of a fun way to talk about the absurdity of these costs.”

“Maybe it’s my economics background that got me interested in that topic, combined with this more recent push for value-based care in medicine,” he explains. “With this game, I’m not trying to point blame at anyone. It’s hard to figure out 100% what’s going on to drive these prices, but it’s interesting to look at.”

Berkwitt will be pleased if “Dr. Plinko” contestants at CWOS find the game entertaining, but he also hopes that his creation will lead to more discussion.

“I would like for people to walk away saying, ‘Wow, healthcare is pretty expensive — maybe more so than I thought.’

“It’s scary to think about how sustainable these costs are for our future,” continues Berkwitt. “What do we get out of it? What else could we be spending on — such as education and social services —if we weren’t paying so much for healthcare? I think my game demo will be a success if people come away asking those kinds of questions.”

He says that starting a conversation is “just a beginning,” as he hopes eventually it will lead to change in the healthcare economic system.

“Our presidential candidates did not address the issue of healthcare in the first presidential debate,” Berkwitt says. “People say that the economy is the most important issue, but healthcare is our economy. I know that the system that exists has been in place for a long time, and that the people who are profiteering from that system put big money into lobbying in Washington, so it is going to be hard to make changes. But, clichéd as it is to say this, change only happens with people, and can only happen when people wake up to being consumers in a healthcare market.” 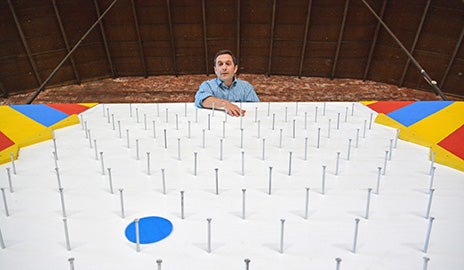 “Dr. Plinko” is one of eight games commissioned by Artspace for this year’s “Game On!” theme. In addition to the game show, CWOS will also feature field and lawn sports, video games, board games, and scavenger hunts. Two games developed under the direction of Dr. Lynn Fiellin, associate professor of medicine, will also be demonstrated during the weekend of Oct. 15-16 as part of the CWOS Alternative Space Weekend. Those interactive video games — “One Night Stan” and “PlayForward” — were developed as part of the play2PREVENT Lab at Yale to prevent risky behaviors in youth and young adults.

Berkwitt’s “Dr. Plinko” and Fiellin’s video games will be demonstrated at the Goffe Street Armory, 290 Goffe St. in New Haven. The Armory is open noon-6 p.m. both Saturday and Sunday.

Berkwitt will be joined at the Armory by his friend Shelly Stevens, who will be an announcer for “Dr. Plinko” (much like the late Rod Roddy in “The Price Is Right”). The Yale physician acknowledges that he’s anxious about his game host debut, and hopes that plenty of CWOS visitors at the Armory will — to borrow the famous phrase from “The Price Is Right” — “come on down!”