Howard Dean ’71 discusses those ‘left behind’ by globalization 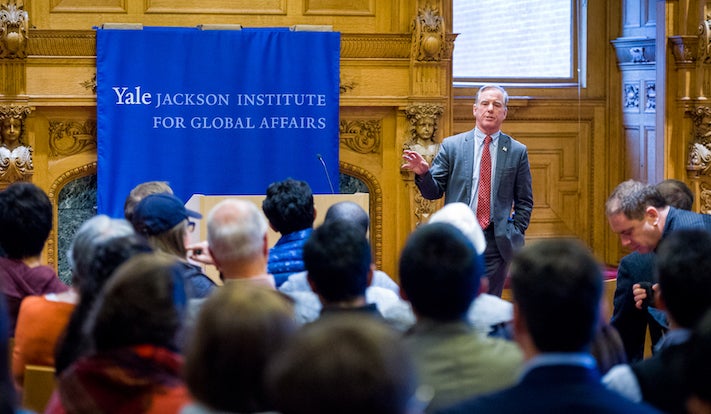 Howard Dean, former Vermont governor and chair of the Democratic National Committee, pointed to “those left behind by globalization” as the common thread underpinning the Brexit referendum, the accelerating career of conservative French politician Marine Le Pen, Donald Trump’s rise to U.S. presidential candidate, and other populistic neo-nationalism movements throughout the world in a talk to members of the Yale community at the Jackson Institute for Global Affairs on Oct. 10.

In the talk, titled “Election 2016: The Referenda on Democracy and Capitalism,” Dean argued that globalization has devastated the largely white, formerly industrial, Midwestern communities that once comprised America’s powerful middle class.

“The younger generation is the first where 40% of Americans consider themselves to be global citizens, which is extraordinary and very different from when I was young” said Dean, who graduated from Yale in 1971 with a degree in political science. “But this is not how those who have been left behind by globalization feel.”

Those left behind, Dean said, face a world in which their opportunities for economic security and advancement are vastly different than for their parents and grandparents, largely due to the decline of American manufacturing jobs. “For the first time in American history, if you are white and you lose your job at 50 years old, you probably won’t get another one,” he said. “While minority communities have experienced this for a long time, it’s the first time that this has happened to large numbers of middle-aged white people, especially men,” he said, noting that this group is the core of Trump’s support.

Dean dismissed the idea that international trade treaties are responsible for the decline of manufacturing jobs, pointing instead to the rapid pace of technological change.

“It used to be that if you lived in the Midwest and you had a high school education and you worked hard and maybe knew someone in the auto industry, you could get $15/hour, rent a cottage for two weeks on lake Michigan in the summer, and send your kids to college,” he said. “But that doesn’t exist anymore because so many manufacturing jobs have been replaced by automation and the new ones require a level of digital nativism that these people don’t have.”

This new economic reality, Dean argued, has exacerbated divisions between this group and the better-educated, more-globalized, younger people in coastal cities. Furthermore, he said, the rapid change of cultural norms — from social and legal acceptance of same-sex marriage to the renewed push for full equality for women and people of color — have altered social structures that seemed immutable a generation or two ago, a shift that leaves older, white Americans feeling like “the rug has been pulled out from underneath them.”

The combination of these forces form the backbone of modern populisms like Trump’s, Dean said, noting that Brexit was not about the pros and cons of the European Union and Trump’s appeal is not about building a wall on the U.S.-Mexico border.

“This is not about rationality,” Dean said. “But just because it’s not rational doesn’t mean that we at Yale, in this academic bastion of really smart people, can assume that it’s foolish and stupid — it’s driven by a powerful force that will remain after the election is over.”

Dean predicted that cultural accommodations — accepting the equal status of women, racial minorities, and the LGBTQ community — will come in time as younger generations come into power. Economic accommodations, however, must be dealt with more actively, he said.

“We need to allow people to get into the middle class and secure it if we’re going to get rid of this phenomenon of fear in people who are or were in the middle class,” he concluded.

At the end of the talk, Dean took questions from the audience. Several questions focused on the futures of these “left-behind” communities: Is there any room for small Midwestern towns in an increasingly globalized world? Can true economic advancement for all really exist, or will there always be advantages for some at the expense of others?

Dean paused before answering. “White privilege is dying, and to lose that privilege in small towns where there aren’t any other privileges is scary for those who experience it,” he said. “But we have to look at what’s happened to, say, the coal industry in West Virginia. The coal industry won’t be coming back anytime soon, but we have to do something to help them so kids in West Virginia have viable futures.”

Dean teaches a seminar on the politics of foreign policy at the Jackson Institute.