Maya Lin ’81 '86 M.A. delivered the inaugural lecture for “Women of Yale,” a presidential lecture series that will continue through 2019 to commemorate the 50th anniversary of coeducational education at Yale. She spoke extensively of the environmentalism that underpins her life's work.
By Karin Shedd
Share this with Facebook Share this with Twitter Share this with LinkedIn Share this with Email Print this

Alumna Maya Lin ’81 ‘86 M.A. describes her life’s work as an interplay between art and architecture that emphasizes a strong commitment to environmental protection and justice.

“When I was a kid, I was in the Kroeger parking lot petitioning Japan to save the whales,” Lin said to a crowd of more than 400 people during a campus lecture on Oct. 7. “Then I got to Yale and discovered art and architecture. In essence, though, all of my work is about the environment.”

Lin, who famously beat nearly 1,500 other submissions to design the Vietnam Veteran’s Memorial in Washington, D.C., during her senior year at Yale College, presented the inaugural lecture in the “Women at Yale” lecture series. President Peter Salovey described the lecture series as a way to “build momentum leading up to the 50th anniversary of co-education at Yale.”

Members of the Yale community eager to see Lin filled the Robert L. McNeil, Jr., lecture hall at the Yale University Art Gallery well before the lecture’s 5 p.m. start time. Salovey noted this devotion in his introduction, remarking that Lin “motivated an entire generation of Yale students” who witnessed her rapid rise to national acclaim. Through her work, Lin has maintained the attention of the public eye over subsequent decades, winning the 2009 National Medal of Arts — the nation’s highest honor for artistic excellence.

Marta Moret MPH ’84, who lead the development of “Women at Yale,” cited Lin’s creativity in designing the Women’s Table as one reason among many that she was chosen to be the series’ inaugural speaker.

After discovering that a faculty member called female students “silent listeners” even before they were admitted to Yale College (women had attended some graduate schools before coeducation was introduced at the undergraduate level), Lin decided to figure out exactly how many women were at the university during each year of its history and feature the numbers on the Women’s Table. 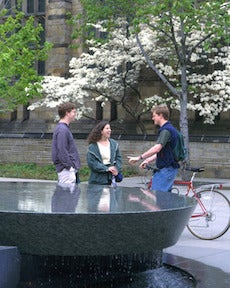 “Apparently there was a quota: 1000 Yale men still had to be at the university, so only so many women per class could be admitted,” Lin said with a wry chuckle.

Lin began the lecture with a series of photographs of her projects that altered the topography in places such as Sweden, New Zealand, the Hamptons, Michigan, Miami, and Kentucky.

“I am intensely interested in the space between things,” she said. For one of her topographical works, called “flutter,” Lin constructed shallow wave formations outside a federal courthouse in Miami. Visitors can climb atop and walk between the waves.

For the latter half of the lecture, Lin discussed her commitment to environmental activism, especially her new initiative “What is Missing?” — a “global memorial to the planet,” according to the project’s website. The website features sound and video clips of the natural world on an interactive map of the world, as well as personal accounts of environmental degradation and loss from people all over the world. Offline, Lin has created both permanent and temporary art installations that invite visitors to consider that which is, or will soon be, missing from the natural world.

“There have been mass extinctions in the history of our planet. The last one was caused by an asteroid the size of Manhattan. We are witnessing the sixth in the world’s history and the only one not caused by a catastrophic event, but by mankind,” Lin said. She implored audience members to “imagine a future that balances our needs with the needs of the planet.”

Previously, Lin served as a trustee on the Yale Corporation, the first artist and Asian-American woman to do so. To learn more about her life and work, visit her website and “What is Missing?”