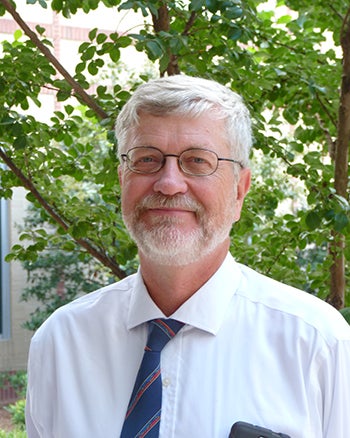 Dr. Sten H. Vermund, a professor of pediatrics, medicine, health policy, and obstetrics and gynecology at Vanderbilt University, has been named by President Peter Salovey and School of Medicine Dean Dr. Robert J. Alpern as the next dean of the Yale School of Public Health. His term will begin Feb. 1, 2017.

At Vanderbilt, Vermund has also been the Amos Christie Chair in Global Health, director of the university-wide Vanderbilt Institute for Global Health since 2005, and, more recently, the vice president for global health of the Vanderbilt University Medical Center.

Vermund received his M.D. from Albert Einstein College of Medicine. After training in pediatrics at Columbia, he pursued his interest in public health by completing a master’s degree in community health in developing countries at the London School of Hygiene and Tropical Medicine, a diploma in public health at the Royal Institute of Public Health and Hygiene, and a Mellon Foundation-supported fellowship in clinical epidemiology at Columbia-Presbyterian Medical Center. He received his Ph.D. in epidemiology from Columbia University.

Prior to joining Vanderbilt, he was professor of epidemiology, medicine, pediatrics, and nutrition sciences at University of Alabama (UAB) School of Medicine, director of the Division of Geographic Medicine in the Department of Medicine, chair of the Department of Epidemiology, and, later, director of the Sparkman Center for Global Health at UAB School of Public Health.

“In the mid-1980s, Vermund helped establish the first adolescent health clinic that provided some of the earliest care to HIV-infected youth in New York City,” noted Salovey and Alpern in a letter to the Yale community announcing the appointment. “His work showed that HIV was a risk factor for cervical cancer, which motivated routine cervical cancer screening for HIV-infected women worldwide. He served as chief of the Vaccine Trials & Epidemiology Branch in the Division of AIDS at the National Institute of Allergy and Infectious Diseases from 1988 to 1994, a time when AIDS activism had a major influence on government policy. Recognizing the need for prevention approaches, his branch launched HIVNET (HIV Network for Prevention Trials), a major international research network that evolved into several NIH-sponsored networks focused on prevention. His advocacy for a women’s health cohort culminated in the Women’s Interagency HIV Study (WIHS).”

For the past two decades, Vermund has focused on global health issues. In developing countries, where Pap smears are not routine, his team promulgated a technique using acetic acid to visually detect cervical lesions and built a major screening program in Zambia that has become a global training center for individuals from more than 20 countries. In 2000, he founded the Centre for Infectious Disease Research, now one of Zambia’s largest NGOs, which currently supports more than 330 clinics that play an instrumental role in the prevention of maternal-fetal HIV transmission and the implementation of antiretroviral therapy. He also founded Friends in Global Health in 2006, an NGO in Mozambique and Nigeria that has provided HIV-related care to over 140,000 individuals. His recent work includes research on HIV prevention in intravenous drug users in Pakistan; cervical cancer prevention at Tanzanian HIV clinics; HIV prevention in China in men who have had sex with men; and maternal-fetal HIV transmission in Nigeria.

A member of the Institute of Medicine (now the National Academy of Medicine) since 2012, Vermund is also a fellow of the American Association for the Advancement of Sciences and a member of the American Pediatric Society. He is a 2014 recipient of the Allan Rosenfield Alumni Award for Excellence in Public Health from the Mailman School of Public Health at Columbia University. In 2012 he received the Douglas K. Richardson Award for Perinatal and Pediatric Health Care Research from the Society for Pediatric Research, and in 2010 he received the Albert Einstein College of Medicine Alumnus Lifetime Achievement Award.

Vermund served as chair of the HIV Preventive Trial Network from 2006 through 2012 and has served on the executive committee since 2000. He is currently on the editorial boards of multiple journals, including the Journal of Acquired Immune Deficiency Syndromes, the Journal of the International AIDS Society, the Journal of Global Infectious Diseases, AIDS, and the Transactions of the Royal Society of Tropical Medicine and Hygiene. He serves as both academic editor and section editor of PLOS ONE.

“Dr. Vermund is committed to training the next generation of public health researchers and practitioners,” said Salovey and Alpern. “He has been a mentor to scores of individuals who have gone on to distinguished careers heading major programs, including working collaboratively over the years with Yale’s own Ann Kurth, dean of the Yale School of Nursing. In turn, Dr. Vermund was himself mentored by Yale Professor Emeritus of Medicine and Epidemiology and Public Health Gerald Friedland.”

Salovey and Alpern also expressed gratitude to Paul Cleary for his “exemplary leadership” as dean during the past 10 years. “We look forward to Dr. Vermund continuing Dr. Cleary’s legacy of growth and innovative research,” they said. “Please join us in welcoming Dr. Vermund and his wife, child psychiatrist Pilar Vargas, to the Yale community.”