On Saturday, a group of 120 Yale students and alumni gathered at The Graduate Club for “Career Skills and Life Design: Forging Your Own Trail from Yale.” The day-long program on Sept. 24 was executed by “Careers, Life, and Yale,” an organization founded last year by the Association of Yale Alumni that seeks to foster connections and relationships between students and alumni. Opening speaker Kim Goff-Crews ’83 ’86 J.D., secretary and vice president for student life, took the podium during the complimentary breakfast. 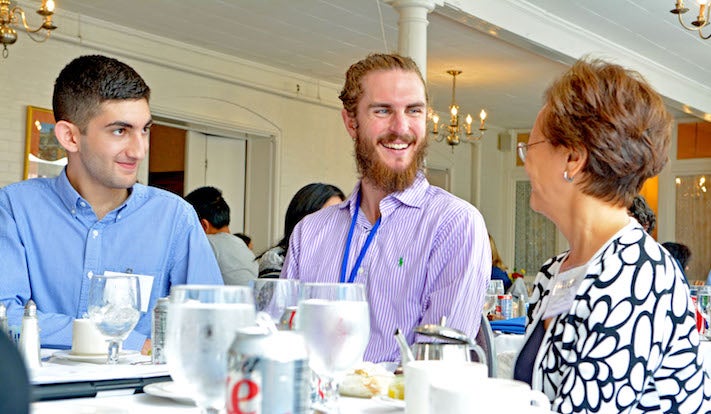 “I didn’t know what I wanted to do after Yale,” she declared.

With that, she echoed a common sentiment among many Yalies and established the theme for the day’s events. Lise Chapman ’81 MBA, event chair of AYA and co-founder of “Careers, Life, and Yale,” explained that the program seeks to help students approach life after Yale with hearts and minds that are open to a myriad of possibilities, and not to feel stuck with one life path.

“Many students come to Yale with a roadmap, and our goal is to get them to open their hearts and minds to see other possibilities: career interests, passions, and future opportunities,” she said of the program. “By connecting alumni to students, we hope students can see how they have forged their own paths and be inspired and maybe even form relationships with them.”

In the morning, students went to alumni-led panels on interviews, networking, public speaking, time management, and Yale’s career services resources. In the afternoon, Pulin Sanghvi ’92, executive director of Princeton’s career services office and a member of AYA’s board of governors, gave an interactive presentation on imagining and creating a life that supports one’s interests, goals, and core values.

Steve Blum ’74, the senior director for strategic initiatives at AYA, emphasized the ability of alumni to help current students navigate life after graduation.

“No matter how great Yale’s faculty are, 160,000 alums have a lot more combined wisdom than even the best professors can provide,” said Blum ’74. “It’s a whole extra dimension to the education Yalies receive.”

Weili Cheng ’77, executive director of the AYA, added that the university benefits greatly by alumni engagement.

“Alumni become very energized when they interact with students. They love engaging with students, and if the AYA can foster those connections, everyone wins,” Cheng said.

The alumni in attendance exemplified what Goff-Crews called “the many ways and faces of life after Yale”: a former lawyer turned workplace advisor who advocates for meditation and yoga; a ’64 graduate who broke with a seven-generation family tradition of being pastors to work in advertising in New York; and a pastor who broke with 14 years of being a lawyer to attend Yale’s Divinity School.

Carter Page ’19 — who, like Goff-Crews, has “no idea” what he wants to do after Yale — was pleasantly surprised by these diverse career paths.

“I thought [the program] would be more like hardcore training in skills required to be a stereotypically successful Yalie: networking, interviewing, and other stuff like that,” he said. “It was really interesting to see all these people who didn’t know what they wanted to do or who had one career and then drastically changed it.”

Between the morning and afternoon sessions, students and alumni mingled at a networking lunch. Laughter and chatter echoed around The Graduate Club’s dining room. Cheng said that it looked like what President Salovey called a “unified Yale” — one with strong bonds between different segments of the community.

“The older you get, the more you realize that the time you spent on campus is such a small piece of your life,” Cheng said. “But the wonderful thing about Yale is the connection you have with the university lasts a lifetime.”