The atmosphere of the Chaplain’s Office at Yale is one of inclusive serenity, even when oblivious visitors stroll into the Hindu meditation room without first removing their shoes. 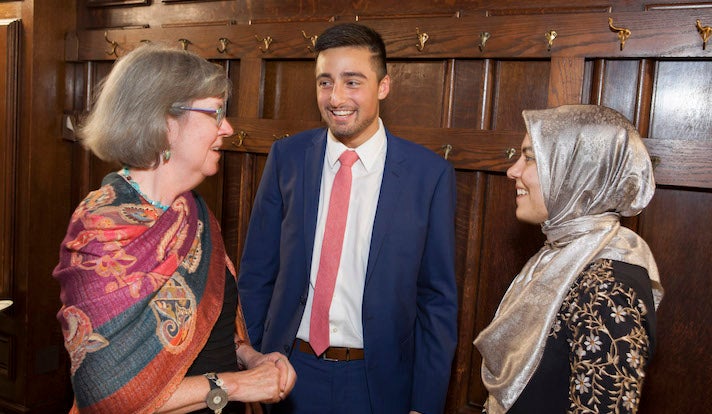 “It’s okay,” said University Chaplain Sharon Kugler, diffusing the angst of the cultural faux pas with a chuckle. “You didn’t know any better.”

The office, located in the basement of Bingham Hall on Old Campus, is a maze of meditation and prayer rooms for different faiths, a general hangout space boasting comfy couches and free ice cream, and a room stocked with markers, coloring books, and games like Bananagrams. Artwork made by current and former students decorates the colorful walls — Kugler said she wanted the space to “evolve with the students and staff that contribute to it.”

“It seemed like there was this idea that walls at Yale had to be white,” Kugler said, laughing as she recalled her arrival on campus nearly 10 years ago. “I wanted to change that.”

Kugler, who took over as chaplain in summer 2007, made it her mission to make the office into a place where any Yale student could come to relax and find community. Her tenure has seen the addition of a Hindu prayer space (2010); Global Grounds, which turns the Dwight Hall common room into a coffee house with free food and board games every Friday and Saturday evening (2010); and “Breathing Space,” the room in the basement of Welch Hall on Old Campus with coloring books and games for students to hang out and de-stress (2011).

Now, having been recently re-appointed as chaplain through the 2021-2022 school year, Kugler plans to build on the work she and her office have already done, but also to focus on new challenges — in particular, getting an above-ground space that could host all of the office’s programs. Recently, YaleNews sat down with Kugler to discuss this goal and her previous nine years as university chaplain.

What drew her to Yale

Prior to coming to Yale, Kugler lived in Baltimore for 23 years, 14 of which she spent as the chaplain at Johns Hopkins University.

While she fostered a vibrant religious community while there — the annual Diwali festival [Hindu festival of lights] was so popular that it was held in the gym — Kugler said that “science really drove the day at Hopkins, so it was sort of a lonely place if you were a religious studies type of person — they didn’t even have a religious studies department.”

Because of this, Kugler said, she was excited to join the community at Yale for its increasing diversity, rich history of chaplaincy, and Divinity School. “The thought of living on campus and having the ability to foster hospitality in my own home and office and work with people who want to pursue those same things seemed like such a great opportunity,” Kugler said. “And I was still young and had the energy for another adventure.” Now, Kugler oversees a large staff from her office in the basement of Bingham and teaches a class — “Models and Methods of College and University Chaplaincy” — at the Divinity School.

Beyond moments of crisis

Recently, Kugler attended and spoke at the wedding of a former law student and devotee of “Cookies & Coloring,” a weekly, no-phones-allowed gathering featuring free cookies and coloring books held Thursdays at 4 p.m. in Breathing Space. This sort of community creation, Kugler said, is what drew her to the chaplaincy at Yale.

“I wanted to create a chaplaincy that felt more accessible and that is known to the campus beyond moments of crisis,” Kugler said. “It’s normal to default to the idea that the chaplain is that person who steps in when something bad happens, and that is, of course, something that we consider a privilege to do because those are such difficult times for the community, whether it’s something that happened here or a global event that impacts us.

“But I hoped that wouldn’t be the lead story when people think about the chaplaincy. I want them to think about it as a place that engages with large questions of meaning, a safe place to land after a tumultuous day in school or at the office, and also a place that feels inviting to just come and be who you are,” Kugler said.

Ice cream and a bouncy castle

Much of what Kugler has done over the past nine years has centered on increasing the visibility of the chaplaincy, from sitting on the Intercultural Affairs Council to keeping the office open past the typical 9-5 schedule to erecting a blow-up bouncy castle sporadically around campus. Kugler sees this as an important step in creating a flourishing religious community. 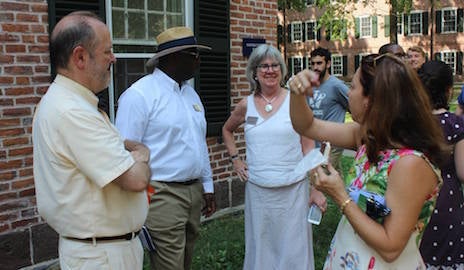 “One goal I had was to figure out how to get the larger community engaged in religious diversity in ways that feel fun, for lack of a better word,” she said. “So, for example, we had a very modest Diwali celebration when I first started that the Davenport head hosted in his common room. But now it’s huge — big crowds and giant sparklers out on Beinecke Plaza. And what I love about it is that most of the people there aren’t necessarily Hindu. They’re there to support their friends and because it’s fun!”

Kugler also supports the idea of “radical hospitality.” The ice cream, the bouncy castle, Breathing Space, etc., reflect Kugler’s emphasis that the Chaplain’s Office is there for whoever, whenever. She spoke of the many times a stressed student sought a moment’s respite in the office, noting “that and hundreds of other examples implies that we’re doing something right.”

While Kugler spends her days cultivating communities at Yale, she also found one of her own: chaplains at peer institutions.

“In a single campus community, there isn’t really another thing like the chaplaincy, so you want to talk with people who are also in these communities. It’s not a competitive relationship with peer institutions. We all love what we do and so we always reach out to each other when we encounter a challenge,” Kugler said. “The Ivy chaplains gather each May, and it’s a time for casual conversation, catch-up, talking shop, and general ‘brain dumps’ about what’s working for us.”

Kugler and her peers even collaborated on a book: “College & University Chaplaincy in the 21st Century: A Multifaith Look at the Practice of Ministry on Campuses across America.” The book explores topics like navigating secular academies as religious professionals, balancing chaplaincy and professorship, and “chaplain as mentor and counselor.”

“Friendships between chaplains run deep because we have a huge thing in common: a deep love for this work and the knowledge that most people don’t understand this work,” Kugler said with a laugh.

Kugler recognizes that, unlike in Yale’s earlier days, the “centerpiece of the chaplaincy’s work is not the Sunday morning pulpit.” Still, she points to the need for a humanizing force among Yale’s academic and extracurricular rigor as a job of the chaplaincy — and one of fundamental importance.

“I feel like, at some point in my career, I stopped feeling self-conscious that this is all sort of lightweight,” Kugler said of her experiences working in campus religious ministry. “It’s not. We’re in a heavyweight place with lots of powerful and important things happening, but we’re still human beings who need to remind themselves of that. Any way we can tease that out without expectations of judgment or evaluation is good.”

Kugler said the increased stimulation that is part-and-parcel of living in the 21st century exacerbates the anxieties commonly faced by young people. “Young people have to have this filter of what is worthy of their time and headspace and what isn’t. I think that, added to the angst of the 20s, is terrible,” she said. Combating that angst, she said, is a driving force and one of her favorite parts of being university chaplain.

Furthermore, Kugler sees the chaplain as an important advocate for the increasingly diverse needs of Yale’s religious communities.

“We’re blessed to have a large staff, so that’s built-in diversity for our staff meetings right there. As religious communities grew, we made a case for full-time employees to assist them, so now we have full-time directors of Hindu and Muslim life and a Buddhist life advisor,” Kugler said. “That diversity informs our thinking all the time, from the littlest things like what food do you serve that everyone can eat to big things like how to care for different communities on holidays and observances. It’s complicated, chaotic, and holy all in one.”

A space above ground

As the programs and staff of the Chaplain’s Office have expanded, Kugler’s dream has become to exchange the underground maze for a large, centralized space.

“My biggest goal is to see if we can get a free-standing space above ground where people could come from all four directions and see the things that we do. Not underground or in borrowed space across campus, but a large, central space that can house everything we do,” Kugler said. “I feel like we’re kind of hidden in the basement of Old Campus. We love the proximity to the students, but I also have no doubt that, wherever we go, the students will seek us out. And why? Because there’s plenty to draw them to us.”

More important than the logistics, however, is the symbolism such a space would provide, she noted.

“I feel like if you have a living, breathing model of what diversity and inclusiveness can look like … what an inspiration that can be for everybody,” Kugler said. “That’s the thing about chaplaincy: it’s always trying to figure out how to stay present in this ever-changing world of religious pluralism, and it can be chaotic but it can also be joyful.  So my hope for the next five years is to figure out a way to have a physical example of that.”