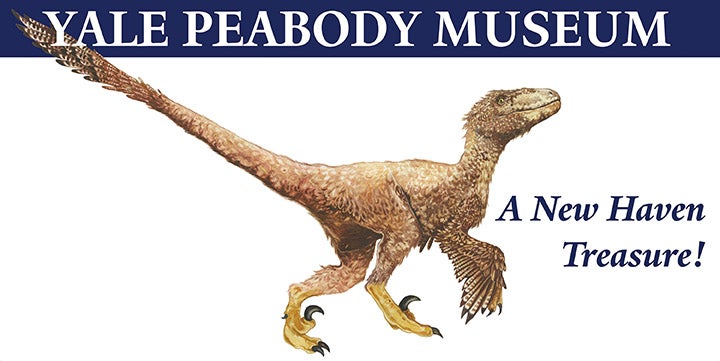 The gulls and cormorants around New Haven Harbor now have in their midst an ancient ancestor, if only a two-dimensional one.

A larger-than-life image of the dinosaur Deinonychus is displayed on a Magellan Midstream Partners, L.P. petroleum fuel tank located along the harbor on the east shore of the Quinnipiac River.

The 72’ x 36’ mural replaces one of the same dimensions featuring a detail of the museum’s “The Age of Reptiles” mural by Rudolph Zallinger that had to be removed in 2014 for tank coating maintenance.

“On behalf of the more than 1,700 men and women who work for Magellan across 24 states and the 34 that are here in New Haven, we are pleased to spotlight the Yale Peabody Museum at our petroleum storage facility,” said Mike Mears, Magellan CEO. “The Peabody Museum is an important part of the community and we hope this mural will attract more positive attention to one of New Haven’s treasures.”

“Everyone at Magellan has been fantastic to work with on this project,” said Peabody Director David Skelly. “We are appreciative of their efforts and really pleased that we will again be able to remind the many people who cross the bridge each day that New Haven is a wonderful city that is home to iconic institutions like the Peabody Museum.”

The Deinonychus mural was unveiled on Sept. 13, a month in advance of the Yale Peabody Museum’s 150th birthday celebration. The subject of the mural is particularly fitting, said officials, as Yale and the Peabody have been at the leading edge in dinosaur research and the dinosaur-bird link from the beginning and Deinonychus has played a central role.

Peabody paleontologist John Ostrom discovered the first bones of the animal that he would later name Deinonychus antirrhopus in the badlands of Montana in the summer of 1964. His scientific descriptions of this lightly built, agile predator, together with his suggestion that it may have been a gregarious pack-hunter, heralded in a revolution in the interpretation of dinosaur biology. It also sparked the “Dinosaur Renaissance” of the 20th century that infused mainstream culture. Deinonychus (meaning “terrible claw”) was the inspiration for the Velociraptor in “Jurassic Park,” although scientists now know that it bore feathers as the mural image demonstrates.

The artist, Arietta, is known for her whimsical renditions of people and places. Her original painting, created with tiny brushes and many layers of paint, incorporates the latest scientific knowledge of this animal.

Installation of the mural was performed by Merritt Graphics using 3M Hi Performance Envision print wrap film/over laminate. The product is non-PVC for a green solution. It is expected to be on view for 20 years and seen by occupants of the 140,000 vehicles that cross daily over the Pearl Harbor Memorial Bridge, also known as Q Bridge, on I-95.