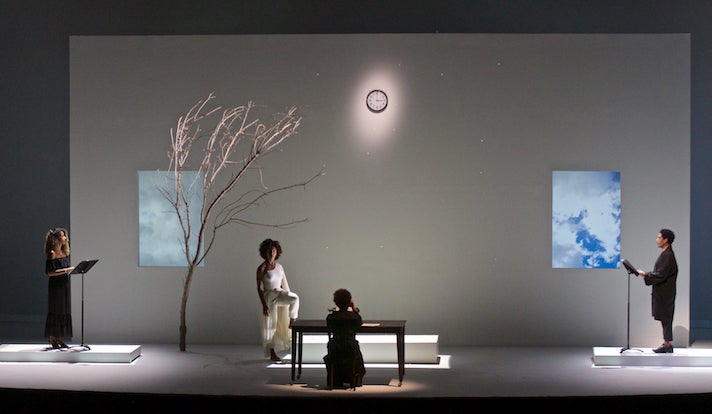 “Grace Notes: Reflections for Now” defies easy explanation, which makes sense as defiance is part of its nature. Midway through “Grace Notes,” a group of young black men, members of the Yale chapter of Omega Psi Phi Fraternity, rhythmically step, clap, and stomp their way onto the minimalist stage. Their black t-shirts read “BLK LVS MTR” in vivid color, and they weave shouted demands to end the “senseless violence” that “kills our people” into their step routine.

At a panel hosted at the Yale University Art Gallery on the Saturday after “Grace Notes’” opening night, Willie Jennings, a professor at the Yale Divinity School, called this ability to “turn pain into productivity” a “gift of black folk.” It is a gift that many people throughout history have shared, he said, but that is put on powerful display by the author, Carrie Mae Weems, and her cast of fellow black Americans.

But “Grace Notes” emotes more than just defiance. Played out among invocations of African-American culture is frustration, soulful remembrance, hope, punctuations of humorous levity, and, above all, sorrow. Weems invites the audience to join her as she tries to make sense of the senseless violence that has gripped the nation and the world in the 21st century.

“’Grace Notes’ began … with a deep desire to get at what was troubling me,” Weems wrote in the performance’s program. “It examines the wider social implications of tensions at work in communities across America … [which are] marked and defined by recent escalations in violence, the killings of young black men, and the events of the Emanuel Nine,” she said, referencing the deaths of nine African-American members of the Emanuel African Methodist Episcopal church (Emanuel A.M.E.) in Charleston, South Carolina, in a mass shooting last summer.

Weems said she felt compelled to create “Grace Notes”after hearing President Obama sing “Amazing Grace” at the funeral of the Reverend Clementa Pinckney, senior pastor at Emanuel A.M.E. and one of the nine who lost their lives in the June 2015 shooting. “Grace Notes” premiered at the Spoleto Festival in Charleston in early June 2016. The performances at Yale, on Sept. 9 and 10, featured not just the permanent cast members, but also step teams from Yale, Hillhouse High School, and the Omega Psi Phi Fraternity.

Weems described the performance, in part, as a “history of violence” that attempts to explain how society went from entering the 21st century “looking back [on the violence of the previous century] with fingers crossed” to the current state of the world.

“Events that were the original impetus to bring this project into being continue to occur with infuriating frequency,” Weems wrote in the program, adding that these have “amplified [‘Grace Notes’’] urgency.” “The wider issues they raise make up the uneasy center of our national conversation as we approach a historic turning point as a country.”

At the Saturday panel, which drew a crowd of over 100 people, Jennings discussed this history and Weems’ earlier works with co-panelists Susan Cahan, lecturer at the School of Art; Daphne Brooks, professor of African American studies and theater studies; and Nell Irvin Painter, a retired professor of history at Princeton University and recipient of an honorary degree from Yale.

Cahan’s presentation explored Weems’ earlier works, noting how the playwright has always grappled with “taxonomies of economic and social categories that continually divide humanity into smaller and smaller segments.” In “Grace Notes,” Cahan said, Weems was continuing this work by insisting on “the essential humanity of all people.”

This insistence forms the most visceral part of “Grace Notes.” Near the end of the show, Weems moves beyond inviting the audience to watch her journey to demanding that they, too, feel the pain of black America. “He was 32. She was 24. He was 12,” she and her fellow cast members intone, voices overlapping as the infamous videos of the shootings of black Americans play, back-to-back, in stark black-and-white. At the beginning of the show, Weems had insisted that “Grace Notes” is a “performance, not a play,” but the videos remind the audience that this is not just a performance — these videos are reality, and nothing will change how they end.

The videos are then replaced by names — the names of the men and women whose deaths had just appeared in the videos and many more. The whole cast says “commemorating,” then one member, a young woman in a flowing white dress, reads the names. “Trayvon Martin. The Emanuel Nine. Every black man who lives to see 21.” As the names continue to appear on screen, Weems insists the audience take part. “Commemorating” echoes around the packed theater, again and again. When the last names — “Alton Sterling” and “Philando Castile” — appear, the young woman’s voice cracks with emotion, and a nearby cast member places his hand on hers.

Painter explained this decision to include the audience in the performance as a way to underscore the idea that “everyone is implicated. These events are because of us as particular individuals and as part of our culture, society, and civilization.”

At the end of the show, the featured step teams danced their way back onto the stage to the tune of lively jazz played by the orchestra. They bowed and made way for the main cast members while the audience clapped and cheered. When Weems appeared, the whole audience rose to their feet and roared their approval. She smiled and waved, then turned to join the cast’s impromptu dance party that had broken out behind her.

To learn more about the life and work of Carrie Mae Weems, visit her website.