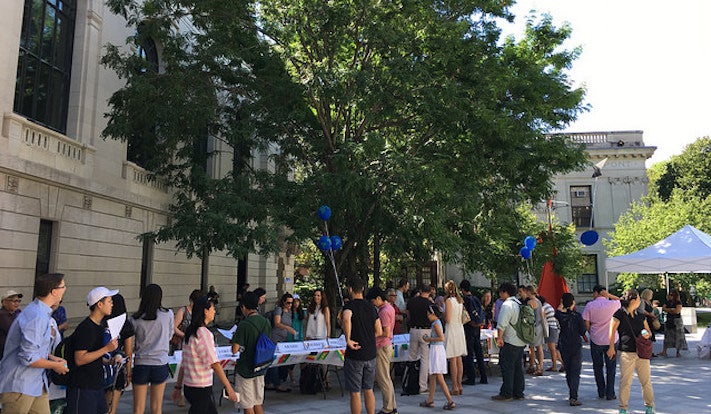 Nelleke Van Deusen-Scholl, director of the Center for Language Study (CLS), could explain the benefits of language study in seven or eight languages. Today, she chose English.

“[Studying languages] is not so much about becoming perfect. You’ll never become a native speaker,” Van Deusen-Scholl said. “Having learned or studied another language helps you in many ways beyond just being able to speak another language.”

Championing the study of languages — beyond earning necessary credits to graduate — is the prime directive of Van Deusen-Scholl and the rest of the staff at the CLS, which was founded in 1999 to help undergraduate, graduate, and professional students navigate language study from Level 1 to advanced independent study and beyond.

Some of the center’s programs include one-on-one tutoring for undergraduates enrolled in a language class as well as an intensive three-week course for international graduate students to prepare them for the advanced academic English they will use in their research. Students interested in studying languages not currently offered at Yale can apply to the Directed Independent Language Study program (DILS), which matches students with “language partners” for up to four semesters of tutelage.

“If there is a worthy application of academic interest or need, we do everything we can to accommodate them,” Van Deusen-Scholl said, adding that over 1,500 students have benefitted from the DILS program. 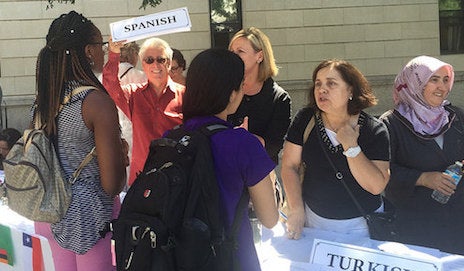 There has been consistent interest in American Sign Language (ALS) among DILS students, said Suzanne Young, associate director of the CLS. “Some languages might periodically spike in popularity due to geopolitical factors, but then they go away. If we could have one wish to add a language to the official roster, it’s that.”

Finding language partners can require “a bit of a detective effort,” said Van Deusen-Scholl. “If there is someone at Yale who speaks the language, we will train them as a language partner,” she said. “If not, we will find someone who can teach via distance learning.”

Distance learning, which connects students and teachers via video teleconferencing, has seen the most growth of all the CLS’ programs, said both Van Deusen-Scholl and Young.

While Yale has made many classes free to the public via online video, distance learning is different due to its interactive nature. Yale students taking German, for instance, can have weekly hour-long video chat sessions with students taking English classes at a university in Germany.

The center also utilizes distance learning in the Shared Course Initiative (SCI), in which Yale partners with Columbia and Cornell to offer languages that a single university could not support on its own. This year’s SCI features languages like Serbian, Hungarian, Dutch, Sinhala, and both modern and classical Tibetan.

Recently, the CLS introduced new and returning students to the university’s 50-plus language offerings at a language fair in Beinecke Plaza — everything from French and Spanish to Czech, Farsi, Sumerian, and Yoruba. Chocolate euro coins were scattered across the tables, a bowl containing dozens of miniature national flags acted as a centerpiece, and the representative for the Turkish course offered samples of Turkish delight to passersby. It was a celebration not just of separate languages and their respective cultures, but of their flourishing at Yale, noted Van Deusen-Scholl and Young.

“Not every university has the rich diversity of languages we have here at Yale,” Young said. “We are lucky to have so many at a time of budget crises and national reductions in languages being offered, and the language fair is intended to bring awareness to that.”

When asked to elaborate on the importance of studying languages, especially in a world that values a particular few, Van Deusen-Scholl and Young had much to say.

“A lot of what we do is informed by research — there are many cognitive benefits to studying languages,” Van Deusen-Scholl said. “But beyond that, it’s about the ability to move between your own perspective and another’s — translingual and transcultural perspectives.

“There is much talk about globalization, but to be truly global you have to understand what it’s like to view the world through a different perspective, and you can learn that by studying a language and its culture,” she said.

Young also noted the importance of a “profound identity formation” that happens in language study. “You’re a child again in that setting — you feel that frustration of wanting to say more but not being able to, and in that struggle, you learn different things about yourself. I see it all the time with Yale students who say, ‘I feel different when I speak French; is it the words in my mouth of the culture I’m discussing?’ And that is a very important part of the whole liberal arts picture that we shouldn’t leave behind.”

Or, as Charlemagne said in a quote that is featured on the CLS website: “To have another language is to possess a second soul.”

To find out more about the Center for Language Study and its programs, visit its website.