An exhibition opening Sept. 15 at the Cushing/Whitney Medical Library showcases the artwork of Sue Coe, an artist, illustrator, and visual journalist, whose prints and drawings often provide potent social and political commentary.
By Mike Cummings
Share this with Facebook Share this with Twitter Share this with LinkedIn Share this with Email Print this 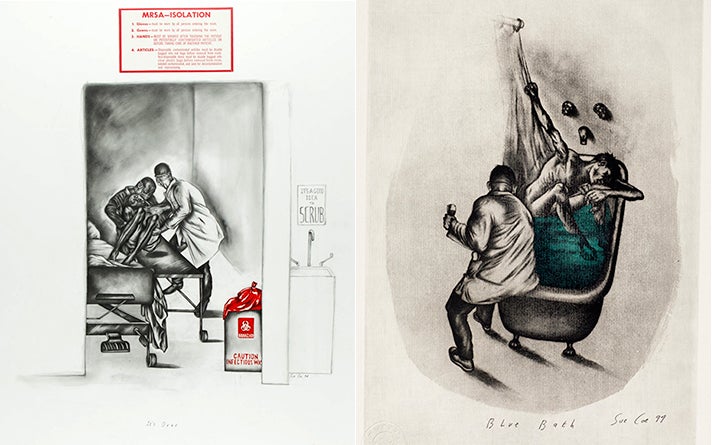 The drawing shows doctors huddled around a dying patient. The patient’s head is turned slightly on a pillow. Her hands are clasped on her chest. Her left eye is wide open. She looks scared.

Text underneath the picture, the artist’s handwritten notes, provides context.

The exhibit,  “’The AIDS Suite,’ HIV-Positive Women in Prison and Other Works by Artist/Activist Sue Coe,” on view in the library’s hallway and  rotunda through Jan. 10, features 27 drawings and prints by Coe, whose work has been published in The New York Times, The New Yorker, and Rolling Stone. Coe’s artwork is represented in the collections of major museums, including Metropolitan Museum of Art, Museum of Modern Art, and Whitney Museum of American Art.

Five of the large-format drawings on display are from “The AIDS Suite,” a series of drawings she made from 1993 to 1994 based on her experiences observing patients of Dr. Eric Avery, an artist, activist, and psychiatrist, on the AIDS ward of the University of Texas Medical Branch in Galveston, Texas.

“She goes into places that are not easily accessible and records what she sees,” said Susan Wheeler, the medical library’s curator of prints and drawings and the exhibit’s organizer. “Her task in Galveston was to capture the reality of the suffering patients and the empathy and professionalism of the staff who cared for them.”

The five large drawings from “The AIDS Suite,” which the library acquired in 2015, will be displayed alongside two other large works by Coe: a drawing from “Through Her Own Eyes,” a series Coe did capturing the experiences of women prisoners in Texas who were infected with HIV; and a drawing of Coe’s elderly neighbor walking down a hallway hunched over a cane.

The show also features smaller drawings and prints from “The AIDS Suite” and “Through Her Own Eyes,” as well as examples of Coe’s animal rights and anti-war activism from the library’s collection of her work.

A smaller drawing from “The AIDS Suite” on view shows Avery massaging the back of a patient whose flesh is speckled with Kaposi’s sarcoma lesions.

“This is important to the medical community because the doctor is touching the patient, which was something that they did not often do when these drawings were made,” Wheeler said.

Another small drawing shows a patient curled inside a bathtub. Avery is seated on the rim of the tub. They are holding wine glasses. The bath water is blue.

“The patient was very close to death. He asked Avery to share this particular cocktail with him, which was blue,” Wheeler said. “As the patient drank, the cocktail went right through him and colored the water blue.”

One of the large drawings shows two orderlies transferring a patient to a gurney.

“It’s over,” reads the text below the image.

Wheeler said the exhibit offers a poignant window into life during the AIDS crisis in the 1980s and early 1990s.

“A lot of people who will see this are probably too young to recall the immense fear and suffering AIDs wrought 30 years ago,” Wheeler said. “This is before effective anti-viral drugs were widely available and before medical staff had best practices fully in place to prevent transmission of the disease. The work captures the dedication of the nurses and doctors and the anguish of the patients and their families. It is quite moving and it invites discussion.”

The public is invited to view the exhibit at an opening event at 4 p.m. on Thursday, Sept. 15, at the medical library, located in Sterling Hall of Medicine, 333 Cedar St. At 5 p.m. Coe and Avery will give a talk presented as the Barwick Lecture, Program for the Humanities in Medicine, co-sponsored by the Cushing/Whitney Medical Library. The talk, at 4 p.m., will be followed by a See the website for library hours.