The Yale Center for British Art will host the first major exhibition to survey the tradition of marine painting that was inextricably linked to Britain’s rise to prominence as a maritime and imperial power and to position the genre at the heart of the burgeoning 18th-century British art world.

“Spreading Canvas: Eighteenth-Century British Marine Painting” opens Sept. 15 and will run through Dec. 4 at the center.

The demand for marine paintings, and the prints made after them, in the 18th century — from ship launches to shipwrecks and naval battles to serene coastal views  — reflects Britain’s dependence on the sea. In an age when Britain claimed to rule the waves, marine paintings found a new importance and helped the island nation tell its stories of triumph and disaster.

Naval officers commissioned artists to paint the battles in which they had fought and sometimes made their fortune. The exhibition will include annotated sketches and letters that reveal the ways in which officers often worked with artists to ensure that the details of events — the number of ships involved, the direction of the wind, the damage sustained to masts, spars, rigging, and sails at a given point in the action — were accurately depicted in the finished paintings. These were the conditions under which the British navy achieved its victories, and the paintings would represent these victories for posterity.

By including examples of the sketches, plans, and textual accounts that underlay the finished works, “Spreading Canvas” reveals the processes through which marine painters constructed depictions of highly complex events that had taken place over great distances and lengths of time.

Samuel Scott’s “Vice Admiral Sir George Anson’s Victory off Cape Finisterre” (1749), still in its original trophy frame, is one of a suite of paintings by the artist that depicts events in the illustrious career of Admiral George Anson. It includes a wealth of visual detail that convinces the viewer of its accuracy but also compresses the events of the action such that a narrative unfolding over several hours appears in a single, unified painting. This work of art will be included in a section of the exhibition inspired by a letter written by Anson’s wife, Lady Elizabeth Yorke Anson, to her sister-in-law. The letter describes the installation of objects at Shugborough, the house belonging to Anson’s elder brother: Scott’s paintings of Anson’s naval victories; the model of the “Centurion,” the ship in which Anson sailed around the world in 1740-1744; and a set of prints, published in 1748, which illustrate the account of Anson’s voyage.

Tthe exhibition will reconstruct the full array of representational modes — pictorial, planimetric, narrative, and plastic — that were deployed throughout the century to represent the maritime exploits of the nation. Moreover, Shugborough not only provides a rare example of the ways in which marine paintings were displayed in domestic settings, but also highlights the frequent role played by naval wives, specifically in the commissioning and display of marine paintings and in the promotion of their husbands’ reputations. 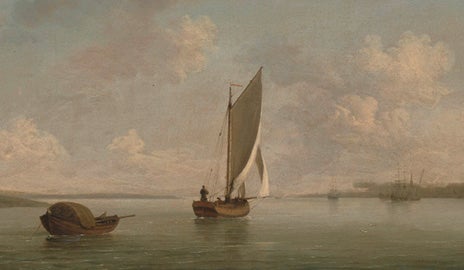 The exhibition will be arranged in thematic sections within a broadly chronological framework. It will begin with the arrival in England of the Willem van de Veldes (father and son), the Dutch painters who were given a studio at the Queen’s House in Greenwich and paid to depict “sea fights.” Having sailed with the Dutch fleet to make drawings and then paintings of the sea battles of the first and second Anglo-Dutch wars, the Van de Veldes produced views of the third Anglo-Dutch War, such as “Sea Battle of the Anglo-Dutch Wars” (ca. 1700), for British royal and naval patrons.

In the early 18th century, the prolific oeuvre of the Van de Velde studio — their hundreds of drawings, in particular, but also prints after their paintings — were collected and used as models by British artists. Marine painters such as Peter Monamy, Charles Brooking, and Samuel Scott were central to the art world that included William Hogarth, Thomas Gainsborough, and Richard Wilson; their works were shown together at the first public displays of art in London, in the 1740s, and at the first public exhibitions in the 1760s. Scott’s “The Thames and the Tower of London” (1771) will be shown alongside selections from a series of his large sketches made along the river. His connection with Hogarth is demonstrated in an illustration from “The Five Days’ Peregrination,” which recounts a rowdy outing taken by the two artists and their friends. The illustration shows Scott sketching ships at anchor in the river while his companions converse.

“Spreading Canvas” also examines the interest of artists and the public in views of British coastlines, the first line of defense for an island nation, and of colonial and imperial forts and settlements. Charles Brooking’s “Shipping in the English Channel” (ca. 1755) is both a celebration of British sea power and trade in a location of geopolitical significance, and an evocation of early morning light and atmosphere.

The exhibition concludes with marine painters’ responses to the artistic revolutions of the 1790s, in which early modern ways of depicting and knowing became eclipsed by new modes of representation and exhibition. These included the panorama and other forms of large-scale, popular scenic entertainment; public exhibitions devoted to single works of art; and the arrival on the scene of J. M. W. Turner, who in responding to his British contemporaries and his Dutch predecessors, explored new ways of engaging artistically with the sea.

Drawn primarily from the collections of the Yale Center for British Art and augmented by loans, “Spreading Canvas” will demonstrate that marine painting was both ubiquitous and fundamental to 18th-century British culture.

“Spreading Canvas: Eighteenth-Century British Marine Painting” is organized by the Yale Center for British Art and curated by Eleanor Hughes, deputy director for art & program at the Walters Art Museum. The organizing curator at the center is Matthew Hargraves, chief curator of art collections and head of collections information and access.

The exhibition will be accompanied by a fully illustrated book, edited by Hughes and containing essays by Richard Johns, Sarah Monks, Geoff Quilley, Christine Riding, and Catherine Roach. The volume will be published by the Yale Center for British Art in association with Yale University Press.