Works by contemporary British Nigerian artist Yinka Shonibare MBE, who is best known for his explorations of the legacies of colonialism thorugh sculpture, installations, film, and photography, will be on display this fall at the Yale Center for British Art.
Share this with Facebook Share this with Twitter Share this with LinkedIn Share this with Email Print this

Works by contemporary British Nigerian artist Yinka Shonibare MBE, who is best known for his explorations of the legacies of colonialism through sculpture, installations, film, and photography, will be on display this fall at the Yale Center for British Art.

The display, on view Sept. 1 through Dec. 11, will focus on Shonibare’s interest in the British historical figure Admiral Lord Nelson, (1758-1805), whom he uses as an emblem of Britain’s imperial history.

An important feature of Shonibare’s work is his consistent use of colorful, wax-printed cotton fabrics, which are associated with Africa but originated in Indonesia and Holland. A product of global trade and imperial markets, the fabric captures the themes at the heart of Shonibare’s work.

The center’s presentation in its second-floor galleries will include the original scale model of “Nelson’s Ship in a Bottle,” unveiled in 2010 in Trafalgar Square, which Shonibare produced for his commission for Britain’s “Fourth Plinth” series. Since 1999, the “Fourth Plinth” has provided a space dedicated to contemporary art commissions, and Shonibare’s was the first commission in the series granted to a black artist. It was also the first to engage directly with the history of the square, which commemorates Britain’s naval victory at the Battle of Trafalgar. Captured within a gigantic glass bottle, “Nelson’s Ship in a Bottle” is a representation of “HMS Victory,” Nelson’s famous flagship at the Battle of Trafalgar, the campaign in which the admiral heroically lost his life. Shonibare’s model ship accurately replicates “HMS Victory,” but its 37 sails are made from his signature Dutch wax fabrics. “Nelson’s Ship in a Bottle” marked the beginning of Shonibare’s exploration of Nelson’s image and reputation beyond his death. 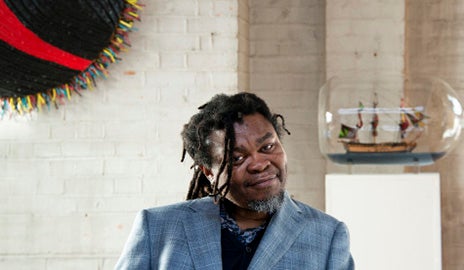 In addition to the model of this commission, the center will present a number of related works, including a screening of Shonibare’s “Addio del Passato” (2011). The film presents the final aria from Verdi’s “La Traviata,” reimagined as a performance sung by Nelson’s estranged wife, Fanny, played by the black British opera singer Nadine Benjamine.

The costumes worn by Fanny and Nelson in the film will be displayed in glass cabinets, alongside three framed digital chromogenic prints, drawn from Shonibare’s series “Fake Death Pictures” (2011). The photographs extend Shonibare’s exploration of imperial heroism through the figure of Nelson. Each is based on paintings depicting deaths and suicides, including Edouard Manet’s “The Suicide” (between 1877 and 1881), and each thereby depicts a different death scenario for Nelson. One of the photographs is based on Henry Wallis’s famous painting “The Death of Chatterton” (1856), an icon of the Pre-Raphaelite movement. Shonibare’s restaging of Chatterton recreates the painting in all its details but replaces the body of the young poet with that of Nelson, dressed in a naval uniform cut from patterned Dutch wax-printed cotton. Conflating the romanticized dramatization of the young poet’s suicide with Nelson’s heroic self-sacrifice, Shonibare seeks to challenge and complicate narratives of imperial history, heroism, and death through art historical tropes. The center’s highly finished oil-on-panel study of “The Death of Chatterton” will be on view as part of the collection display in the second-floor galleries.

Shonibare’s work forges resonant contemporary connections to historic works in the center’s collection. The commemoration of Trafalgar and Nelson’s apotheosis were major themes in British art, which visitors can explore in the galleries. In addition, the display will coincide with the center’s exhibition “Spreading Canvas: Eighteenth-Century British Marine Paintings” (on view Sept. 15-Dec. 4), which for the first time offers a sustained examination of the tradition of marine painting responding to and shaping Britain’s rise to prominence as a maritime and imperial power during the 18th century.