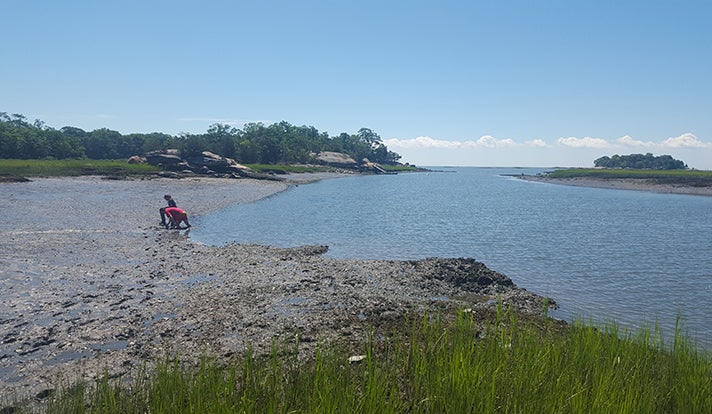 Romy Carpenter waded at low tide across the mudflat to the water’s edge. Up to her shins in the black muck, she scraped a thin layer of mud into a sieve.

Carpenter, a rising junior from Belfast, Maine, was on the hunt for foraminifera — single-celled marine organisms — on property owned by the Yale Peabody Museum of Natural History in the coastal marshes of Branford, Connecticut. She was performing fieldwork as part of an eight-week summer research internship offered by the Peabody Museum of Natural History — one of 10 research internships the museum provided to Yale undergraduates this summer.

The sample collected, Carpenter worked her way through the mud to firmer ground strewn with oyster and tiger mussel shells. Her supervisor, Leanne Elder, a postdoc in the Department of Geology and Geophysics, helped her to rinse the sample with seawater fired from a plastic yellow water gun to separate the organisms from the silt.

Their research involves comparing the contemporary specimens’ physiology and morphology — their appearance and physical structures — to foraminifera specimens in the fossil record. This was their third trip to the picturesque salt marsh on Long Island Sound, where an osprey nest overlooks the property and the Thimble Islands dot the waters just offshore.

Carpenter, who is majoring in ecology and evolutionary biology, says fieldwork was a highlight of the internship, although she appreciated the lab work as well.

“I like pulling hard numbers from the data, which is the most convincing way of communicating any scientific idea,” she said.

The Peabody’s history of providing undergraduates research experiences dates back to 1870 when groundbreaking paleontologist Othniel Charles “O.C.” Marsh led a team of Yale College students on his first fossil hunting expedition to the American West.

Over the years, the museum has sponsored summer research internships, but it was able to expand the program this year through a gift from an anonymous donor.

Other projects included examining possum specimens at the Peabody and other museums in the United States and Australia; experimenting with the effect of light on plant and insect specimens; examining genetic differences in the brains and skulls of chickens and alligators to shed light on the dinosaur-bird transition; and Carpenter’s work with foraminifera in Long Island Sound, among other topics.

The expanded internship program is part of the Peabody’s renewed emphasis on getting undergraduates more involved in research and programming at the museum.

David Heiser, formerly the Peabody director of education and outreach, assumed the role of director of student programs in February and organized the summer internships. He said the program is an important component of the museum’s educational mission.

“The Peabody is here to serve Yale and the students and faculty with our collections and other resources, and this is a golden opportunity to give students an authentic research experience as part of their education,” he said. “The opportunity to work closely with a faculty member or graduate student on research in the collections is an experience that perhaps they can’t get through their coursework.”

It is not only the students who benefit, Heiser said.

“We get the benefit of having these really bright and engaged students work with our collections or add to our collections,” he said. “In some cases, they’ll end up publishing their work. This is knowledge creation and dissemination that contributes to our status as a prominent natural history museum and a place for scientific discovery.”

Claire Gottsegen, a rising junior from Houston, Texas, spent her internship performing genetic research in the lab of Thomas Near, associate professor of ecology and evolutionary biology.

Her worked focused Ethiostoma kennicotti, also known as the stripetail darter, a fish species found in river systems throughout the southeastern United States. It has been considered a single species for over 130 years despite variation in the physical structures of specimens from different populations. Gottsegen’s research has helped demonstrate that E. kennicotti represents more than one species of fish, says Near.

“We had done some preliminary genetic work indicating that E. kennicotti was actually multiple species masquerading as one,” he said. “Claire provided us a really valuable set of genetic data and analyses that essentially substantiates our initial assessment. In many respects, her data is much more powerful and compelling.”

Her work involved analyzing the microsatellites, repetitive DNA tracts within a genome, of individuals from six different fish populations.

The work often involved long hours in the lab extracting DNA from tissue samples and pipetting “liquid A” into “liquid B,” she said. (She describes the work in detail in a blog she updated periodically over the internship.)

“I didn’t expect the internship to be as hands-on and as professional as it was, which was a good experience for me,” she said. “I’d never tackled anything like this before, but it was a good challenge, and Professor Near is a great mentor. The analysis was a lot of fun.”

Near, who curates the Peabody’s ichthyology collection, intends to collaborate with Gottsegen to publish the findings in a peer-reviewed scientific journal. The work will involve reviving an old species name that was considered invalid as well as describing four entirely new fish species.

“Claire is a remarkable young person, and she really made the most of this opportunity,” he said. “One thing I love about being at Yale is that when it comes to working with the students, you know what you’re going to get. They’re just so wonderful to work with. I really enjoy it. Providing them these experiences is part of my responsibility as an academic scientist.”

Near, who is the head of Saybrook College, credited Peabody Director David Skelly for prioritizing undergraduate engagement.

He noted that the range of research conducted by the Peabody’s interns this summer underscores the museum’s status as a vibrant research center.

“We’re not just a dusty collection,” he said.