This year’s expanded New Haven Documentary Film Festival (NHDocs) drew more than 1,800 people to the city June 2-12 to view works by area filmmakers. This year, the event also celebrated student filmmakers at high schools and colleges in the region, awarding prizes to the top three entries.

Two of the winners in the competition’s inaugural year were Yale students — a happenstance that underscores the strong connection that has existed between Yale and the film festival from the very beginning. Filmmaker Charles Musser, one of the event’s founders, is a Yale professor. He and New Haven documentary maker Gorman Bechard established NHDocs as an event “by filmmakers for filmmakers and film lovers.” Yale staff members Katherine Germano, Anthony Sudol, and Michael Morand were part of the planning team for this year’s event — the team also included Emmy Award-winning documentary filmmakers Karyl Evans and Rebecca Abbott) —and many of the films were screened in Yale’s Whitney Humanities Center. (Others were shown at the New Haven Free Public Library and at Café Nine in the Ninth Square neighborhood downtown.) In addition, the final weekend of the festival showcased many of the films of Academy Award-winning Yale alumnus Alex Gibney.

• “Speed Fade” by Clark Burnett, a rising sophomore at Yale, earned the 2016 NHDocs Grand Prize for student films. The film followed two Connecticut barbers, Merhan Cecunjanin (“MC Barber”) and Sam Flint as they competed in the speed fade category at the Connecticut Barber Expo. The jury noted, “Clark found a great story with a clear beginning, middle and end about real people doing what they are passionate about and told it in an entertaining and concise way.  He found interesting people to interview, let the film breathe so there was humor in the story, and shot the interviews in a creative way. His editing gave great pace to the film and there was a good use of music.” Their overall verdict about his film was simple: “A joy to watch.” 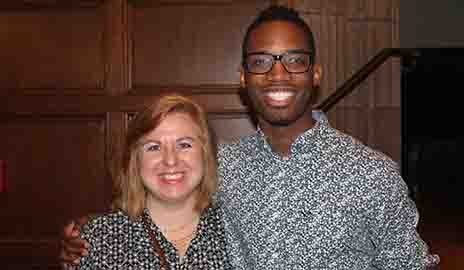 All of the film programs at the WHC and the New Haven Public Library were free and open to the public, thanks to the sponsorship of many Yale departments, local businesses, and other partners. The Gibney retrospective was a partnership of NHDocs with the International Festival of Arts and Ideas, now in its 21st year, with events (85% of them free of charge) taking place across downtown, city neighborhoods, and the Yale campus through June 25.

“Yale arts are your arts”

NHDocs, the International Festival, an abundance of museums and galleries, the historic Shubert Theater, the new College Street Musical Hall, and other venues and events are all evidence that “there is no other city our size in America with such an array of visual and performing arts available as New Haven has, often at no or low cost,” as Yale President Peter Salovey noted a few years ago in an address to the Greater New Haven Chamber of Commerce. New Haven’s cultural scene draws its strength from a combination of community and campus assets in a compact area, Salovey said then, emphasizing to the hometown audience, “Yale arts are your arts.”

NHDocs has grown rapidly in just three years, from a one-day event in 2014, to three days in 2015, and this year’s 11-day festival. Bechard and Musser say they plan for NHDocs to continue to grow in the years ahead and are already planning for the fourth annual festival, to be held during the first two weekends in June 2017.. Readers can find details about that event at the festival website:  http://www.nhdocs.com/ .

Readers are also encouraged to regularly check the Yale Arts Calendar —http://artscalendar.yale.edu/ — for information about all the arts and cultural events happening on campus throughout the summer and during the school year. Most of the concerts, film screenings, exhibits, lectures, and performances are free and open to the public.