The annual two-week festival in downtown New Haven — now in its 21st year — boasts over 170 events, the majority of which are free. Performers include some of the most influential and innovative theater arts, musical, and dance figures from around the world. The festival is one of the biggest arts and cultural events in the New England region, attracting more than 100,000 people to its events.

This year’s festival, its organizers write in the festival brochure, celebrates “who we are, where we come from, and where we live — together — because when you’re there, you’re HERE.” Among the topics that will be explored in the “Ideas” part of the festival, for example, are the refugee crisis, human rights, and the concept of “home” and what it means.

“With the 2016 program, we have stepped up our game yet again, bringing extraordinary talent, creativity, and expertise to our community,” said the festival’s executive director, Mary Lou Aleskie, when announcing this year’s lineup. “Our audiences will be treated to two world premieres, four U.S. premieres, and two works co-commissioned by the festival. The diversity of programs further establishes the festival and New Haven as a major force for the presentation of world-class performing arts and as a catalyst for stimulating discourses about the key issues of our time.”

Yale is a major sponsor of the International Festival of Arts & Ideas, and many of the events take place on the campus.

Below are just some of the festival highlights. For a complete schedule of events, visit the International Festival of Arts & Ideas website.

•  Free concerts on the New Haven Green — one of the most popular of festival offerings — will feature George Clinton (the “Godfather of Funk”) and Parliament Funkadelic on June 11; Grammy Award-winner Lila Downs, whose style is a mix traditional Mexican music, Latin American hip-hop, jazz, blues, and klezmer, on June 12; the Colombian-rooted but New York-based 47Soul and the Middle Eastern immigrant band M.A.K.U. SoundSystem on June 18; Red Baraat, a New York-based band whose music is a brew of North Indian, funk, go-go, Latin, and jazz rhythms, on June 19; and the New Haven Symphony with Cirque Mechanics (featuring acrobats, cyclists, and one-of-a-kind machines) on June 25. All of these events take place at 7 p.m. 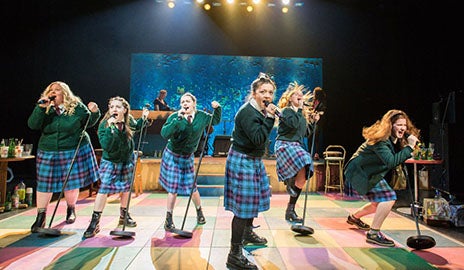 • Ticketed performances include the American premiere ofthe musical play “Our Ladies of Perpetual Succour,” a co-production of the National Theatre of Scotland and Live Theatre, Newcastle, June 10-25; a performance by MacArthur Fellow and Princess Grace Award-winning choreographer Kyle Abraham and his company Abraham.In.Motion, June 14-16; the Grammy Award-winning Maria Schneider Orchestra (whose band blurs the lines between big-band jazz, poetry, and chamber music) performing a work co-commissioned by the festival on June 15; and

“Steel Hammer,” a collaboration exploring the legend of John Henry by Pulitzer Prize-winning Yale composer Julia Wolfe, SITI Company, and Bang on a Can All Stars, exploring the legend of John Henry, June 16-19. Also, the American premiere of “The Bookbinder,” a story inspired by the works of Chris Van Allsburg and Neil Gaiman that weaves shadow play, paper art, puppetry, and music into a performance for children and adults June 17-19 by Trick of the Light Theatre; “The Square Root of Three Sisters,” a remix of Chechovian themes performed June 21-25 by a company of theater artists from the Dmitry Krymov Lab and Yale School of Drama; and open rehearsal readings by the Yale Institute for Musical Theatre June 24-25. See the website for times and locations.

For the Ideas portion of the festival, there will be lectures and conversations on topics including youth activism, identity politics, food science, and more. Among them (there are many more): author Pico Iyer will discuss “When Houses Are Not Homes,” drawing on his own years of constant travel, on June 16 at 5:30 p.m.; SITI Company artistic director and “Steel Hammer” director Anne Bogart will reflect on the contemporary power of story in “Stories We Tell: Narrative and Empathy” on June 18 at 1 p.m.; Jennifer Sime, senior vice president of U.S. Programs for the International Rescue Committee will moderate a panel on “Assimilation or Autonomy? How Culture Can Help the Refugee Crisis” on June 19 at 1 p.m.; and WNPR reporter John Dankosky will lead a discussion on “Power from the Earth: The Shift to Renewable Energy in New England” on June 22 at 5:30 p.m. Dankosky’s discussion will take place at the Yale Center for British Art, 1080 Chapel St.; all of the other talks mentioned here take place at the Yale University Art Gallery, 1111 Chapel St.

Activities for the whole family take place throughout the festival and include “Maker Mania,” where children and adults are invited to play, tinker and create on the New Haven Green 1-5:30 p.m. on Saturday, June 11;a Children’s Film Festival at the Yale Center for British Art beginning at 10:30 a.m. on Saturday, June 11; “The Fairy Circus,” puppetry by the Tanglewood Marionettes on Wednesday, June 15, 1:15-2 p.m. on the Green; and an exploration of the history of African-American emancipation via hands-on crafts, cooking demonstrations, drumming, dancing, and games with Artsucation’s Africa is Me, Kidz Kook, and S.P.O.R.T. Academy presented by the Stetson Branch of New Haven Free Public Library 1-5:30 p.m. on Sunday, June 19.

Walking tours will take guests through the Grove Street Cemetery, Yale Farm, the Peabody Museum of Natural History, the Eli Whitney Museum, Massaro Farm, and more. The 150th anniversary of the bicycle patent will be celebrated with Elm City Cycling-hosted bike tours throughout New Haven and in towns beyond, including a ride to Ansonia, where Pierre Lallement built and demonstrated the first pedal bicycle. Canoe and kayak tours of the Mill River and Lighthouse Point Park will be offered by New Haven Parks & Recreation and Trees Outdoor Adventure Program.

Master classes by some of the performers, gastronomy tours and food talks, and tours of Yale museums, are among the many other events that will take place during the festival.

See the website for a full schedule of festival offerings and event descriptions.