International students and scholars find friendship and community at Yale 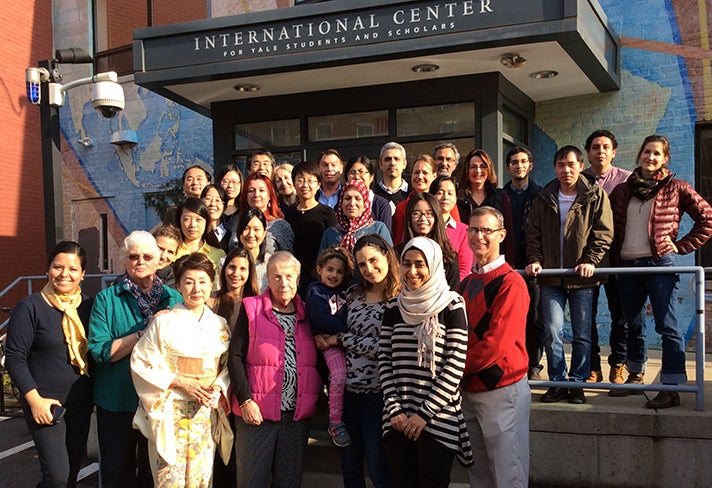 Hector Correa and Yiding Ping arrived at Yale late last summer from different corners of the globe for different reasons.

They met at an English conversation group at Yale’s Office of International Students and Scholars (OISS), where they found a community of people — students, scholars, and their spouses — who have come to Yale from abroad. They got to know each other through the conversation group and became fast friends.

Correa, 33, is from Toluca, Mexico. His wife, Susana, is pursuing a master’s degree at the Yale School of Management. Ping, 38, from Nanjing, China, is a visiting scholar in the Department of Astronomy. Correa came to New Haven in August; Ping in mid-September.

“If Yiding lived in Mexico, we would be friends,” Correa said. “When I’m feeling depressed, I can talk to him about things like in any friendship.”

The two routinely get together for a beer. Their conversations range over a number of topics, including their families — both have daughters — politics, religion, and life in the United States.

“We are very similar,” said Ping, whose wife and daughter remained in China while he is at Yale. “We’ve had similar opportunities, a similar outlook on life, and we love our families.”

Nearly 21% of Yale’s student body is composed of students from foreign countries, according to OISS.  In addition to the 2, 581 international students from 120 countries, in the 2014-2015 academic year Yale hosted 2,447 scholars and nearly 1000 spouses and children. The office provides this diverse community a range of services, including help negotiating the U.S. immigration system, completing taxes forms, settling in to New Haven, and adjusting to life at Yale.

“It’s all about setting the tone, letting them know that this is an office that is available to you — that we’re a friendly and accessible place to ask questions,” Kuhlman said.

Esther Soma ‘16, who grew up in Nairobi, Kenya but is a citizen of South Sudan, made lasting friendships with classmates from all over the world during her pre-orientation.

“I call them my ‘day-one’ homies,” she said. “I met them at OIS (Orientation for International Students) that first week. Some of my closest friends are people I met through this office.”

Soma, who had a student job at OISS’s office on Temple Street in her freshman, sophomore, and junior years, said the office “is like a home to me.”

“It has been a support for me, not only academically but also in adjusting to life at Yale,” she said. “I’ve worked here for three years, and I’ve seen how the advisers genuinely care for the students and will go out of their way to make the students’ experience at Yale wonderful.”

The staff has helped her resolve several visa-related challenges over her four years at Yale. (As a citizen of South Sudan, Soma was required to obtain a new visa every time she returned to the United States. OISS helped her negotiate several visa-related hurdles when she travelled to Nepal, Jordan, and Chile during spring semester of her sophomore year to study human rights issues.)

Soma’s family lives in South Sudan, which has been plagued by civil war since it achieved independence in 2011. She said Kuhlman was aware of events there and would frequently contact her to make sure Soma’s family was safe.

OISS was helping Soma with paperwork so that her parents could travel to the United States to attend her Yale graduation.

Like Soma, Correa and Ping call OISS “a second home.” They regularly participate in the 12:30 p.m. English conversation group, which draws 12 to 25 participants every weekday.

Ping said the conversations there have helped him to learn more about his home country.

“People ask me questions about China, and it’s led me to research my own country’s politics, culture, and religion,” he said.

“It’s actually helped me improve my Spanish,” he said.

OISS hosts a series of programs offering people the opportunity to socialize, learn about American culture, and get to know the surrounding community. For example, on Tuesday evenings during the academic year, the office hosts the Half Past Five discussion group — a coffee hour that gives students, scholars, and their partners a chance to talk about their experiences and the nuances of American culture. It also hosts a monthly lecture series on American culture that often features field trips and film screenings.

“It is all intended to help people feel comfortable and find a community at Yale,” Kuhlman said.

OISS provides volunteer opportunities for members of the Yale and New Haven communities.

The Community Friends Program matches international students with local hosts who provide an introduction to U.S. culture and to the New Haven area. The students do not live with the families, but they keep in touch throughout the academic year and meet occasionally to share a meal or an activity.

The Conversation Partners program connects international students, scholars, and their spouses or partners with local volunteers to engage in a language and culture exchange. They meet for an hour a week at a mutually agreed-upon location to have a conversation in English.

“It can be an amazing experience for the student and the host family,” Kuhlman said. “It has helped spark potentially life-long friendships.”

Ping and Correa intend to stay in touch once they return to their home countries later this year.

“Hector says he will come and visit me in China some time next year,” Ping said.

Both are grateful for the community they discovered at OISS.

“I feel a lot of gratitude toward the people in this office,” Correa said. “It’s always been open to me. People build things here. It’s not just about getting a degree.”

Information about the programs and services provided by OISS, and on how to volunteer for the Conservation Partners and Community Friends programs, is available at oiss.yale.edu