After a May 1 campus screening of his new documentary “2 Fists Up: We Gon Be Alright,” about the Concerned Student 1950 movement at the University of Missouri (Mizzou), noted film director Spike Lee was asked by Yale College Dean Jonathan Holloway if he thinks the nation is in a “new moment” of student protest and uprising.

“I think so. An indication is right here where we’re assembled today — with names,” answered Lee, referring to student protest on campus over Yale’s recent decisions regarding the name of Calhoun College and the naming of the two new residential colleges.

Citing, in addition, student activism to remove the name of Woodrow Wilson from Princeton University’s school of public and international affairs, Lee continued: “We know there’s an evil legacy of slavery that people don’t want to see on campus. Thomas Jefferson sits on a bench at Mizzou. [He was] a slave owner, and a pedophile … Why do we have to give love to it? It’s gotta go.”

Lee took part in a conversation with Holloway before a near-full audience in the Whitney Humanities Center auditorium. He said that he went to Mizzou last fall because he wanted to explore what was happening there. Mike Middleton, the interim president of the University of Missouri System, gave Lee permission to film on campus. His resulting documentary “2 Fists Up” features interviews with the student founders of Concerned Student 1950 (the student protest group), Middleton, and Columbia University professors about the racial incidents and issues on the Mizzou campus. The film also follows events that took place there during the fall semester, such as the decision of graduate student Jonathan Butler to go on a hunger strike until Mizzou president Tim Wolfe resigned and the show of support for Butler by football players who refused to play any games until the graduate student ate food. Wolfe eventually was ousted due to the students’ demands.

Lee made the documentary in partnership with ESPN Films as part of a series of short films titled “Lee’s Lil’ Joints.” A shorter version of the film will air soon on ESPN. Meanwhile, Lee has screened the longer version at Mizzou, Spelman College, and at the recent Tribeca Film Festival. He said his Yale screening on Sunday night was prompted by Pamela George, assistant dean of academic affairs in Yale College, who Lee met while he was a student at Morehouse College and George was at Spelman College. 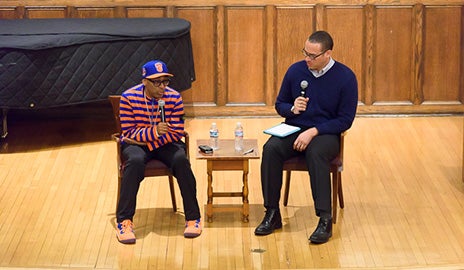 During his talk, Lee credited the #BlackLivesMatter movement for sparking student activism at Mizzou and, later, at college campuses across the country. The movement began in 2012 after the acquittal of George Zimmerman for the death of 17-year-old Trayvon Martin and gained momentum after the killing of black teenager Michael Brown by a white police officer in Ferguson, Missouri.

“Ferguson is part of St. Louis [County],” explained Lee. “A lot of black students at Mizzou are from Chicago and St. Louis. They came back from [taking part in protests in] Ferguson and said, ‘This shit is happening again.’” The film director was referring to some of the incidents described by students in “2 Fists Up,” in which they described being subjected to racist and discriminatory comments and behavior.

“Racism is interwoven into the very fabric of this nation,” Lee told his audience. “So why should university campuses be immune? They are not some utopia. They’re in the world. … I don’t think they should be an exception.” He added that racism is prevalent in every facet of American life, including sports, the media, Hollywood, and the television industry.

Lee said that student activism at Mizzou might not have resulted in any response from the administration had the football team not become involved.

“Butler was willing to die of starvation if Tim Wolfe didn’t resign. The university would have let him … but the football team messed with the bottom line,” said Lee, explaining that Mizzou would have to pay $1 million for every missed game.

He said the decision by the athletes was especially gutsy because by refusing to play, the Division I football players were potentially putting their athletic careers in danger.

“They put that aside … and said, ‘We are not going to play till Jonathan eats.’ That’s revolutionary. That’s never happened before, ever, ever, ever. That’s the spark,” said Lee, adding that their fortitude inspired students on campuses elsewhere.

Asked by a School of Drama student what will happen to Yale students if they feel their own pleas for change on their campus are ignored, Lee pointed to Holloway for an answer.

Holloway confessed that he was surprised by the intensity of student protests in the fall but said that he is “determined to find ways” to address their concerns, saying, “We must fix it.”  He noted that the university has already increased its support of campus cultural centers and is working diligently to recruit persons of color to the faculty, among other efforts.

Lee responded to some questions from audience members by posing his own questions to them. He was forceful, however, in his response to one student, who asked Lee what he hoped viewers would take away from his film.

Before screening his film, the award-winning director paid tribute to Prince, who was a friend. Lee mentioned that 5,000 people were in attendance at a party in Brooklyn that he hosted in honor of the musical icon, who was found dead at his home on April 21. Lee also played a 1991 music video he directed for Prince’s song “Money Don’t Matter 2 Night,” featuring a poverty-stricken African-American family and dealing with the themes of greed, poverty, and money.

The audience gave Lee a standing ovation after his film and again at the close of the conversation.