Citizens of the world must be as fierce in their passion to protect and preserve culture and cultural heritage as extremists are in their desire to destroy it, U.N. Secretary-General Ban Ki-Moon told a packed audience at Yale on April 12.
By Susan Gonzalez
Share this with Facebook Share this with Twitter Share this with LinkedIn Share this with Email Print this 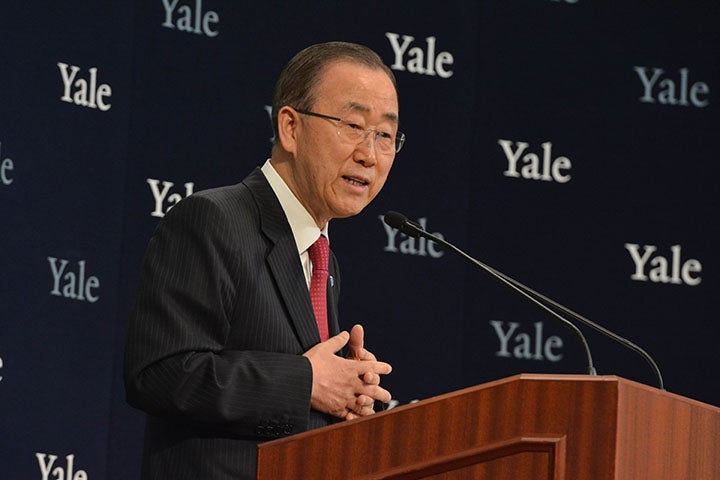 Citizens of the world must be as fierce in their passion to protect and preserve culture and cultural heritage as extremists are in their desire to destroy it, U.N. Secretary-General Ban Ki-Moon told a packed audience at Yale on April 12.

“Art, literature, music, poetry, architecture — these are the hallmarks of our human existence. They form a common thread that unites all civilizations and cultures, a celebration of our emotional lives and the beauty of our natural environment,” said Ban, speaking at Sprague Memorial Hall during the U.N. Global Colloquium of University Presidents hosted by President Peter Salovey and Yale.

“Our cultural heritage defines our humanity. Cultural diversity, like biodiversity, plays a quantifiable and crucial part of the health of human species,” he said.

Read about more events at the U.N. Global Colloquim of University Presidents.

The U.N. leader said that he is personally saddened by the fact that “cultural diversity is under threat around the world” and cited examples of the destruction of antiquities, artifacts, manuscripts, and other cultural emblems throughout the Middle East and Africa by extremist groups.

“An attack on cultural heritage in one part of the world is an attack on us all, on all humanity …,” said Ban. “Who could fail to be outraged by the destruction of the magnificent Buddhas in Bamiyan, the monuments of Palmyra, the mosques and cultural artifacts in northern Mali? This wanton vandalism is not collateral damage. It is part of a ruthless wave of cultural and ethnic cleansing inseparable from the persecution of the communities that created these cultural gems. It is also part of a cycle of theft and profit that finances the activities of extremists and terrorists.

“As a human family, we cannot let them erase our history and identity,” he continued. “Any loss of cultural heritage is a loss of our common memory. It impairs our ability to learn, to build experience, and to apply lessons of the past to the present and the future.”

The destruction of culture by extremists in recent years is not, however, an aberration, said Ban. “Culture is also one of the strongest driving forces for building societies and imbuing them with values. It knits communities together. Extremists and terrorists have known this throughout the ages. They have always understood that by attacking and destroying cultural artifacts, buildings and monuments, they can divide people. They can erase their common values, shred the social fabric, and create greater fragility and vulnerability to build cynical ideology.”

Echoing the comments made in a campus speech the day before by UNESCO Director-General Irina Bokova, Ban noted that that the United Nations has been working to make the protection of cultural heritage a main facet of both its peace-building missions in areas of conflict and in its humanitarian emergency response. Like Bokova, Ban shared his experience visiting Mali, where UNESCO and the Mali government worked in partnership with a peacekeeping mission to rebuild 14 historic mausoleums that were destroyed by Islamist extremists. However, that effort, the U.N. leader said, was about more than the loss of and rebuilding of antiquities.

“[I]t is not just buildings and papers; it is about identity and human dignity,” he said of the destruction. “I’ll never forget speaking to the Grand Iman, local government [officials], representatives from the Christian community, young people, and women’s representatives. They all said they have lived together in a diverse community for 1,000 years.”

UNESCO is prepared to assess the damage to the newly liberated Palmyra in Syria when it is safe to enter, said Ban. “I hope that one day Palmyra, Aleppo, Nineveh, and the other devastated cities of Syria and Iraq will again serve as symbols of unity and diversity.”

He called the passing last year by the U.N. Security Council of Resolution 2199, which bans the illicit trade of antiquities and art from those countries, a “landmark” action. “This was a rare show of unity from the Security Council, which has been in a deadlock over Syrian issues,” he said. “Now we must build on these major steps to advance the cause of peace.”

Even in places without heritage destruction and armed conflict there can still be a shutting down of differing opinions, which is also dangerous, Ban said, stressing that universities must never become such places.

“University campuses are often at the center of very heated debate. Here, too, diverse cultures and opinions are signs of flourishing community,” he said. “Universities need to be places where we can listen to each other and each other’s ideas in peace. There is nothing more important than preserving respect for dialogue, debate, and yes, disagreement. When this respect is lost, damage can be done.”

The U.N. leader noted that half of the global population is under the age of 25 and said one of his priorities has been to help empower young people around the globe.

“The world is at a critical juncture,” he said. “We need the energy and idealism of young people to tackle major threats to human wellbeing.”

Chief among these is the issue of climate change, said Ban, describing it as an “intergenerational injustice.” While speaking on this topic, a group of students in the audience stood up holding a banner that read “U.N. Supports Divestment; Universities, when will you?” 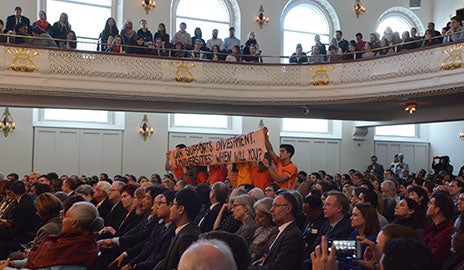 Ban said that a low-carbon economy is “inevitable” in the future, and he commended Salovey for “leading by example” in the area of sustainability and his vision in making it a campus-wide priority.

“I commend Yale for being the first university to join the Carbon Pricing Leadership Coalition,” he said, adding later: “Yale has shown great leadership in this area.” He called on the university and its students to continue to work toward and advocate for a “safer, healthier, low-carbon future.”

During a question-and-answer period, Ban acknowledged that even with such advances as the adoption by 196 countries of the Paris Agreement — a global action plan that limits global warming to below 2 degrees centigrade — progress on climate change action has moved “slower than a snail’s pace.”

Salovey announced during the conversation that Yale’s chief investments officer, David Swensen, had just made public the response to Swensen’s recommendation, via a letter to external investment fund managers, for greater assessment of climate-change risk in the university’s investment portfolio.

“I think that’s a fantastic idea,” said Ban. “I hope all the presidents participating in [the U.N. Colloquium of University Presidents] do what Yale is doing, but at the same time, I appreciate students who stood up with banners. Sometimes you need activism … to really provoke, challenge, and motivate government officials and the business communities. … I’m [telling] young students: You may challenge your professors; you may challenge your congressmen and senators and president. You have that prerogative because you have fresh ideas and creative ideas. Most of all, this is the world where you have to live.”

Ban said other global challenges include the vast numbers of young adults who are unemployed and the movement of displaced people from areas of conflict into Europe and beyond, which he said is the largest migration of people since the end of World War II. He said that there are now 60 million people around the world who need life-saving humanitarian assistance. Ban also spoke of the importance of putting women on equal footing with men in all areas of life, and said that the empowerment of women is crucial to achieving world peace.

Ban’s visit ended following his answer to a question, posed by a student, asking him to describe what important leadership advice he might share. Ban’s term at the helm of the United Nations ends in December of this year.

“I have often said that the highest virtue of a human being is to act like water,” answered the U.N. leader, noting that he told President Obama that he possesses this trait. “Water seems to be just powerless and weak, but [it] is very powerful. … There are some fiery, dynamic people … but do they know how to compromise? Are they flexible? I’ve seen so many leaders who are very dynamic but they don’t know how to make harmonious decisions, [reach] harmonious conclusion in a debate. … You don’t need always to confront. … When it is absolutely necessary, you can push; you can really push hard. This is what we see from water. … Water seemingly doesn’t have any power, but in the end, it can win over anything. Can fire win over water? Everyone believes fire has a deadly force, but water can extinguish it … If you act like water, I’m sure that you will be respected by all the people around you.”