We all have a stake in protecting cultural heritage, says UNESCO director-general 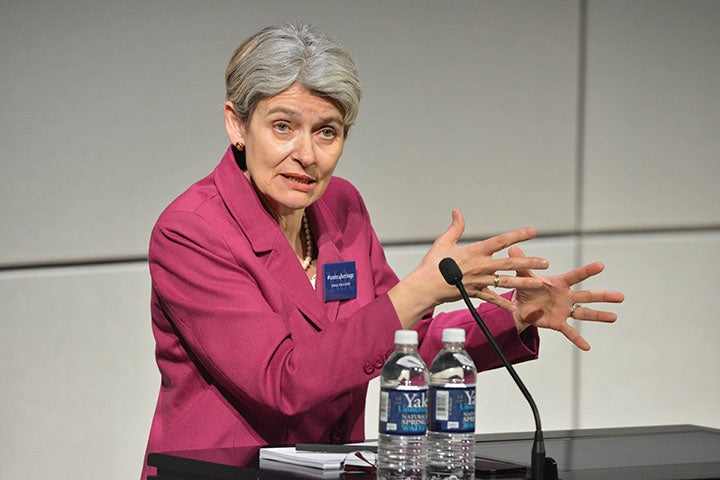 Of all the accolades she has received as the director-general of UNESCO, Irina Bokova is especially proud of being awarded honorary citizenship of Timbuktu in Mali last summer in recognition of UNESCO’s support in rebuilding mausoleums there that had been destroyed by Islamist extremists in 2012.

During her visit to Timbuktu — which is listed as one of UNESCO’s 1,031 World Heritage Sites — Bokova witnessed firsthand the joy of local citizens over the rebuilding of the venerated ancient shrines, she told a large audience in Zhang Auditorium at the School of Management, where she spoke on April 11 as part of the eighth U.N. Global Colloquium of University Presidents (UNGC), hosted this year by Yale. The gratitude of the people from the historic African town, said Bokova, reflects “how heritage can really lift up a population of people, of communities, and mobilize and unite them.”

Read about more events at the U.N. Global Colloquim of University Presidents.

During her talk, Bokova stressed the importance of safeguarding cultural heritage throughout the world, saying that everyone suffers when heritage is destroyed, no matter where it happens.

“[W]e are one humanity,” Bokova said. “[In] any culture there [are] outstanding objects and sites of outstanding universal value.”

Citing examples of cultural heritage sites in Syria, Iraq, Libya, Yemen, Mali, and other nations that have been destroyed by Islamist extremists, Bokova said she considered their loss a form of “cultural cleansing.”

“The destruction of culture shows that violent extremists do not seek only to kill or [gain] control of territory,” Bokova said. “Their objective is the annihilation of ‘the other.’ I believe this is the mark of a genocidal project. Recent attacks around the world — in Belgium, in Pakistan, in Istanbul, or elsewhere — show that such violence knows no borders. Extremists do not choose between culture and people; they attack both. And we need to defend both.”

She said that UNESCO’s mandate is “to protect the heritage of humanity as a source of a sense of belonging, meaning, beauty, and creativity for all of us to share,” adding, “This heritage is indeed a wellspring of light and truth, essential to how we see the world, and understand ourselves and our place in it.”

Bokova noted in her talk that in Syria alone, all six UNESCO World Heritage Sites have been damaged; 60% of the old city of Aleppo has been destroyed; and the damage to ancient Palmyra has yet to be fully assessed. Iraq has experienced not only the destruction of cultural sites and artifacts but has seen its Christian population drop from 1.3 million in 2000 to just 300,000 today, she said.

The UNESCO leader stressed that the protection of heritage is inextricably linked to issues of security, peace-building, and the banning of the illicit trafficking of antiquities and art. She noted that the U.N. Security Council passed Resolution 2199 earlier this year banning all trade of Syrian and Iraqi antiquities, and that UNESCO has recently signed other agreements that will more deeply link the preservation of heritage with military and humanitarian aid operations and the training of those who work in these areas. UNESCO is also working with the U.N. Office of Drugs and Crime and other international bodies and institutions to strengthen efforts to halt illicit trafficking of antiquities, Bokova said.

“I think we must do more,” she said. “We must boost more coordination between member [U.N.] states, among law enforcement agencies, museums, auction houses, and the private market. I think all this is so important to deepen the information sharing and research, and, at the end of the day, to pass a very strong message: It is immoral; it is unethical, it is simply not right, to trade looted objects.”

Some progress has already been made, Bokova said, noting that in the last year, many looted cultural objects have been recovered from around the world.

“There has been a lot of proof that there is a connection that exists between this trafficking and the financing of terrorism,” Bokova told her audience. “Today, in Iraq and Syria, we know that there are many ordinary professionals and museum workers who are risking their lives to protect their heritage. … I think there is much need to value their work, to give them support, and to find ways to show that what they are doing is no less than fighting on the forefront of a military mission or a peace-building mission.”

One simple effort launched by UNESCO, the director-general said, was to give military officers pocket-sized “passports” showing the precise locations of heritage sites, allowing them to protect these places during armed conflicts. Both military officers and peacekeepers are also being trained in how best to protect cultural heritage.

Furthermore, she said, the destruction of cultural heritage must be “punished by all the force of justice,” as outlined in 2002 in the Rome Statute of the International Criminal Court. She said that court has already accepted the case of the first suspect charged with the destruction of mausoleums in Timbuktu.

Perhaps the most important part of UNESCO’s mission is to educate young people about its importance, Bokova told her audience, saying that the struggle against extremists’ destruction of cultural property is “fundamentally a new global struggle for hearts and minds, especially young hearts and minds.” Some of these young people, she noted, have seen their own schools and universities destroyed.

“We need to talk to young people. We need to introduce history [and] protection of heritage values in education,” Bokova said. “We need to win this battle of ideas.”

It is for this reason she said, that last year at the University of Baghdad she launched the #unite4heritage social media campaign, which is now followed worldwide by 15 million people, mainly the young.

“We think this is a way to pass a strong message to young people about culture, heritage, diversity, and also about the need of living together, because at the end of the day, when we speak about heritage and protecting heritage, I think we sometimes forget … that probably this is the best dialogue among cultures. This is about respect; this is about knowledge; this is about tolerance. … It is an extraordinary way for us to know each other, to live together, and to have the feeling that we are one single community, because we all suffer when mausoleums in Timbuktu have been destroyed …”

Bokova thanked the Yale community for taking part in the campaign, noting that she saw many on campus wearing #unite4heritage pins. The initiative to protect “our shared heritage” is the “antidote for radicalization, the antidote for extremism,” she concluded.