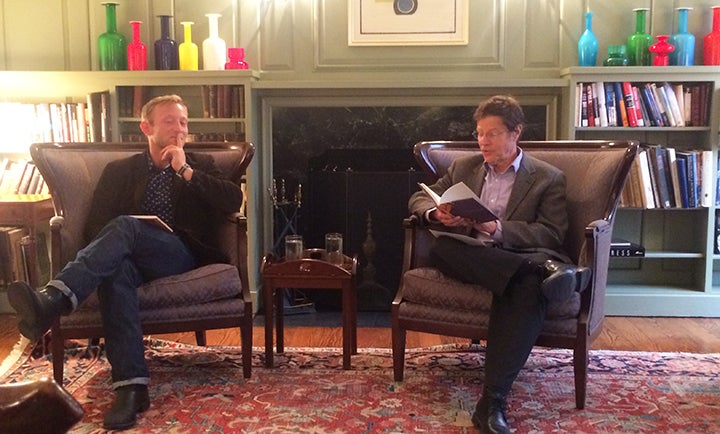 Noah Warren ’11, the 2015 Yale Younger Poet, returned to his former residential college on April 7 to read poems from his new collection, “The Destroyer in the Glass” — just published by Yale University Press — and discuss his craft.

At a master’s tea in Davenport College, he read one poem that he wrote while he was an undergraduate at Yale, as well as others from the new collection. One of these was “Automatic Pool Cleaner,” which describes an experience he had as a housesitter, where Warren quipped, “your only job is to not die.” Among the other works he read are “Cut Lilies,” “La Dolce Vita,” “Quad,” “Barcelona: Implication,” and “A Beginning.” He assembled the poems for his first published collection while living in New Orleans, and said the poems in the book are structured in four sections, “almost like a symphony.”

Warren, who is currently in his first year of a two-year Wallace Stegner Fellowship at Stanford University, also spoke of his year of travel as the recipient of a Frederick Mortimer Clapp Fellowship, which included a three-month trip to Cuba. The poet was able to explore his own ancestry there, where he has extended family on his mother’s side.

Davenport College master Dr. Richard Schottenfeld introduced the Yale alumnus, whose visit to the campus coincides with National Poetry Month. Warren has upcoming readings in Brooklyn, New York, and in Los Angeles. Publishers Weekly recently described his new collection by saying, “[Warren’s] poems are lithe and fluid, rhythmic and pointed. … His economy of language, along with his keen use of enjambment, signals an aptitude for constraint and restraint.”