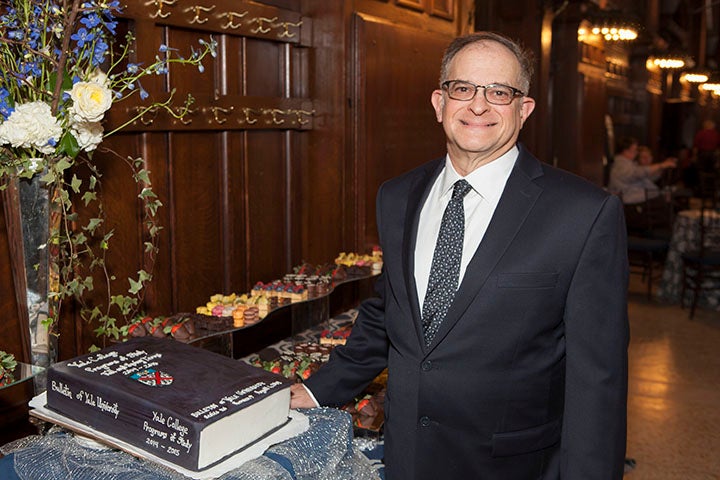 Former students, friends, and colleagues gathered in large numbers at the end of February for a farewell party for former Deputy Dean of Yale College and Dean of Undergraduate Education Joseph Gordon Ph.D. ’78, who recently retired after a career at the university spanning more than four decades.

They celebrated both Gordon’s many contributions during his time at Yale and the next chapter of his life. Yale College Dean Jonathan Holloway said at the event that it is hard to imagine any aspect of undergraduate education in which Gordon has not had some role or influence.

Mark Schenker, the senior associate dean of Yale College and dean of academic affairs, wrote a poem to mark the occasion of his friend and colleague’s retirement. In the poem, “For Joe Gordon: Retiring, Not Receding,” Schenker says Gordon nurtured a “flowering of the spirit” in the many people whose lives he touched at Yale, and writes:

“So much here bears his mark, though not engraved.

I adopt the poet’s praise: the honor of our friend

Joe’s retiring does not bring this to an end.”

Gordon’s long service to Yale has also been commemorated with the creation of Joe Gordon Room in Sterling-Sheffield-Strathcona Hall, where he had an office; in a symposium marking his contributions to language study that was held in at the Center for Language Study last December; and by the establishment of the Joe Gordon Award for Distinguished Contributions to the Arts and Sciences, which was created by the Phi Beta Kappa Society and presented last semester to historian and Yale alumnus David McCullough ’55. In addition, Pierson College planted a star magnolia tree in his honor in the college’s courtyard.

Since retiring, Gordon took the time to speak via email with YaleNews about his long university career. The following is an edited version of that conversation.

Everybody seems to know you, but not everybody knows about all of the responsibilities you had in the YCDO. What, exactly, did you do?

One of the great things about my work is that I had a lot of different things to do. I held two titles in the YCDO: dean of undergraduate education [since 1997] and deputy dean of Yale College [since 1998].

As dean of undergraduate education, I focused on the development of the undergraduate curriculum, working on the Course of Study Committee, the Committee on Majors, the Committee on Teaching and Learning, and several other committees to maintain quality but also to expand the reach of courses. I estimate that I reviewed 10,000 new course proposals in my time on the Course of Study Committee!

I also worked on the establishment of many new majors and special academic programs, such as Energy Studies, Education Studies, the Journalism Initiative, Health Studies, and the Human Rights program. This program work was always done in partnership with directors of undergraduate studies, other faculty, other deans, the registrar’s office, and students, and therein lay most of the pleasure of it — but I’ve kept a cache of course proposals of which I dream that in another life (or perhaps just in retirement) I would really want to enroll in myself.

Perhaps the culmination of this curricular work came in two initiatives: the reforms that grew out of the Committee on Yale College Education (CYCE), which renewed Yale’s commitment to undergraduate education for the beginning of the 21st century; and then the report on the expansion of Yale College by adding two new residential colleges. I chaired the academic arm of that study and Dr. William Sledge [the George D. and Esther S. Gross Professor of Psychiatry and former master of Calhoun College] chaired the student life arm, while Penny Laurans [master of Jonathan Edwards College and special adviser to the Yale president] made sure that neither arm got in the other’s way. Working on the CYCE report and the new residential college study were two of the highlights of my career.

Those are some big responsibilities, but there’s even more.

I always enjoyed working with my colleagues in Admissions, and I had a special role in policies and practices regarding admissions of transfer students and the Eli Whitney students. I also served for a long time on the Committee on Readmission.

Our life in community inevitably faces challenges from within and from without. I have had the opportunity to help out in planning for crises and managing those that occurred. I’ve worked with the board of University Health and very closely with the Resource Office on Disabilities and the chief of student medicine and the chief of mental health and counseling and their staffs at Yale Health. On the Yale College Executive Committee (Ex Comm), I believe that I am the only person who has ever served in five different roles: chair, factfinder, secretary, dean’s designate, and adviser to the charged student. I learned more about others and myself from this work than perhaps any other. Whatever else it is, Ex Comm can be a scene of deep moral inquiry and ethical education. I was sometimes prone to tears, but, as I discovered, one’s own tears are even more difficult to parse than the tears of others.

And, oh yes, in my spare time, I was deputy dean of Yale College, which entailed supporting the work of seven successive deans of Yale College (Sidney Altman, Donald Kagan, Donald Engelman, Richard Brodhead, Peter Salovey, Mary Miller, and Jonathan Holloway) and advising colleagues throughout the university. I loved having the chance to coordinate and consult with the President’s office, the Secretary’s office, the General Counsel’s office, Yale Police, Athletics, and many other groups.

You came to Yale as a graduate student in 1970 and then were hired just six years later as an assistant professor in the English department. Did you miss teaching when you became an administrator?

Very much. The adjustment in my responsibilities occurred gradually, with one course at a time being “exchanged” for administrative responsibilities in summer programs, what was called the Pew (and later the Bass) Writing Program, and the mastership in Pierson, until moving over full-time into the YCDO [as associate dean] in 1988. Even then, for the first decade and more, I regularly taught one course a year, but as responsibilities of the Dean’s Office grew, I could no longer take the time away to teach. 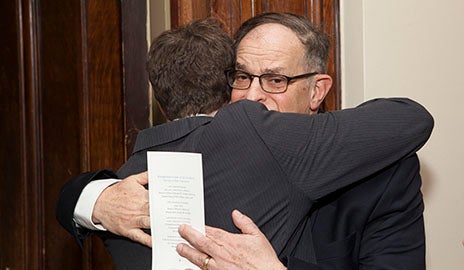 I was never much of a lecturer; the seminar format better suited my personal style of teaching and the materials that I work with in class: poems, novels, and plays that reward close reading and benefit from a multiplicity of interpretations. And to spend the time with Yale students talking about a book other than the Blue Book was always a special treat. I hope to return part-time to teaching in retirement, if there is sufficient demand for additional English courses.

What are some of the biggest changes you saw during your long career at Yale?

The biggest change was the coeducation of Yale College, which occurred as I finished up my Ph.D. and started teaching. We went from zero percent women in the undergraduate classroom to (in English and many other humanities courses) a supermajority. Frankly, everything got better. The more genders represented in the classroom among students as well as among the faculty, the wider grew the range of perspectives available for the important work of interpretation. This is also true of the increasing multiplicity of races, ethnicities, nationalities, religions, socio-economic backgrounds, and life experiences of students.

I remember years ago having some Eli Whitney students in a class on English literature from just after World War II. For them, that reading list held truly contemporary material, which they read in ways different from those of fellow students born 50 years later. I believe that veterans and parents also bring special insights to literary criticism. Diversity in the classroom is not just an abstract good; it brings everyday benefits to the work of teaching and learning.

You were the first openly gay master of a Yale residential college (acting master of Pierson College 1987-1988) and have since been a voice on the LGBT Studies committee, including chairing that committee. How did it feel to have that distinction?

It felt comfortable. Everyone was supportive. Then-President Benno Schmidt was the brave one in inviting me to serve. After that, it required no courage on my part, because the students and the Pierson Fellows responded immediately and still down to this day with such warmth and enthusiasm that it was a pleasure to act in that role.

I feel that others on the faculty in my time were more important pioneers in the effort to change the public perception of lesbian and gay people and of the field of LGBT studies. I think of John Boswell, the first “out” member of the Faculty of Arts & Sciences to get tenure, whose research and teaching directly addressed LGBT issues. Sandy McClatchy [professor adjunct of English and editor of the Yale Review] taught the first course in English to focus on “The Homosexual Tradition in Literature.” My fellow graduate student Eve Sedgwick Ph.D. ’75 was already laying the groundwork for her important book, “Between Men,” drafts of which we discussed by day in the old Machine City [a former basement space in Sterling Memorial Library] and continued to talk through in expansive, lingering phone calls at night. These folks and many others made a deeper contribution than I.

Well, there is one area that I probably stood out more conspicuously, and that has to do with the culture of the reestablishment of the Air Force and Navy ROTC on campus. As an official liaison to those programs, I worried at first that my being gay would be a problem for building up a good working relationship to the leaders of the ROTC units or for supporting students in those units and elsewhere on campus. It turned out that those leaders and indeed all the personnel on their staff and among their recruits have been not just welcoming but affirmative, no matter what their politics. I would never have predicted that I would feel so close to a military program, but I am happy and proud to say that I am.

In a Yale Daily News article about your retirement, you were hailed as being “one of the most beloved” figures on campus and as “indispensable.” Has it been hard for you to leave Yale after 46 years? What are your plans for retirement?

Yes, indeed, it is hard. Of course my husband, Mark Bauer [associate director of the Whitney Humanities Center], and I haven’t moved away from the area. He’s still working here, so that’s an important tie. And I am still participating in a number of on-campus activities, including a wonderful faculty seminar this term on opera taught at the Whitney Humanities Center by Ellen Rosand [the George A. Saden Professor Emeritus of Music] and peopled with some of the most distinguished faculty at Yale (including a professor from molecular biophysics and biochemistry and one from the School of Management, as well as others from humanities departments). I have learned so much from these people!

I continue to meet with my advisees and former colleagues for lunch and tea. So I still feel connected, but not perhaps tethered. The best thing is that I now have more opportunity actually to take advantage of all the exhibits and performances and talks that our campus offers, and I have more time for reading. That’s a blessing.

What have you loved most about Yale?

My colleagues and my students. How lucky I have been to live among and learn from such people for over 40 years!

Are you taking any Yale “secrets” with you?