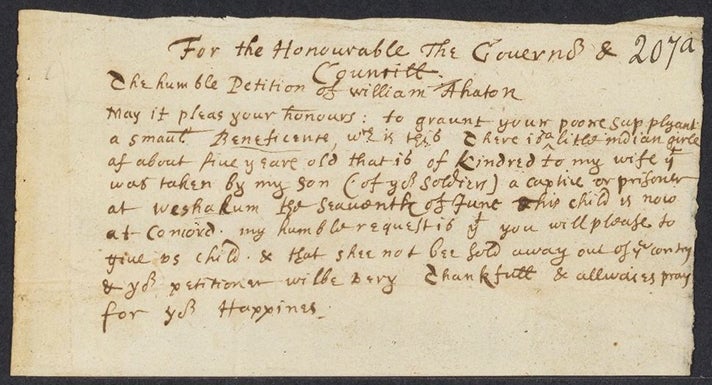 Twelve years after the Revolutionary War, members of the Mashpee tribe in Massachusetts petitioned the state’s General Assembly to demand their share of the freedom and liberty achieved in the hard-fought victory over the British monarchy.

“At the close of a long & successful war, in which we had been honourably distinguished & had profusely bled, how are we disappointed!  How are our pleasing anticipations blasted!” reads the eight-page petition, which was drafted in 1795.

The petition calls out the hypocrisy of those who had professed to cherish freedom and had “so enlarged ideas of the principles of civil liberty” but did not “respect the rights in others which they so warmly contend for themselves.”

Paul Grant-Costa, director and executive editor of the Yale Indian Papers Project, said the petition is among a series of appeals by Mashpee tribe for recognition of its people’s rights.

“These are political petitions — they are asking for help in a different way from other tribal petitions.  They are rhetorical, and they show a keen understanding of American politics and American racism,” he said. “The Mashpees discuss their sovereignty in terms of the rights of man, thus making the 1795 petition a priceless document.  It could change the way people think about native communities both during the Revolution and after it.”

The Mashpee petitions are among an archive of 4,500 petitions to the legislature by Massachusetts tribes between 1640 and 1870 that will be digitized and transcribed under a joint endeavor by the Indian Papers Project, Harvard/Radcliffe College Institute for Advanced Studies’ Native American Petition Project under the direction of Professor Daniel Carpenter, and the Massachusetts Archives, which houses the original petitions.

A $275,000 grant from the Council on Library and Information Resources will fund the digitization and transcription project’s initial phase. Harvard will digitize the archive and the Indian Papers Project will make the transcriptions of 200 to 300 documents that are extremely difficult to read. Working with native communities and scholars, the staff of the Indian Papers Project will select for transcription another 200 to 300 documents deemed particularly relevant or historically significant.

The annotations will also highlight interesting features in the petitions. For instance, the 1795 Mashpee petition contains this common misquote of Prospero’s line from Shakespeare’s “The Tempest”: “like the baseless fabrick of a vision, left not a wreck behind.” The quote is crossed out at the end of the document, but it remains legible.

Founded at Yale in 2001, the Indian Papers Project, a scholarly editing endeavor, has worked closely with native communities in New England to recover and preserve their documentary heritage, and make it accessible online to scholars, students, tribal members, and the general public. It has built a digital collection of more than 1,766 primary source materials compiled from collections in the United States and the United Kingdom. All the materials are transcribed, annotated, and edited to the highest academic standards. The project’s research initiatives create opportunities for communication and collaboration with the region’s native people.

The Massachusetts petition archive, which contains documents from at least 70 native communities, covers a rich variety of topics. There are pleas for financial support from the elderly or infirm. Some seek protection of natural resources, including land and cranberry bogs. Others are political in nature, such as the Mashpee petitions

Early petitions in the archive concern the enslavement of Indians during and after King Philip’s War — a military conflict that began in 1675 in which the Narragansett, Wampanoag, and other tribes fought to assert their sovereignty against the colonists. The colonial forces often enslaved captured Indians.  Many of the slaves were taken from their homelands and often sent overseas to places like the Caribbean, Spain, and Northern Africa.

Indians petitioned the legislature seeking the return of relatives and friends.

William Ahaton, a member of the Natick tribe, wrote a petition seeking the freedom of a “a litle indian girle of about five years old that is of Kindred to my wife” who had been taken prisoner.”

“[M]y humble request is … you will please to give us child & that shee not bee sold away out of ye contry & yor petitioner wilbe very Thankfull & allwaies pray for yor Happines,” Ahaton wrote.

The archive also contains requests by colonists for Indian children to use as slave labor. For example, a Lt. Waye, who had purchased a girl while he was serving as a soldier and brought her home, asked to keep the girl because she had been “a very good Servant.”

Tobias Glaza, assistant executive editor of the Indian Papers Project, said their work with the Massachusetts archive complements work the project has done with petitions from Connecticut tribes to the state’s General Assembly.

“The material from Massachusetts will be entered into our digital platform and will inform similar materials from Connecticut,” Glaza said. “It becomes a very powerful research tool.”

“In elementary school, maybe students get a little introduction to northeastern Indians during Thanksgiving and then the rest of what they learn about native communities focuses on the West and events like Custer’s Last Stand,” he said. “Native communities in New England have lived and interacted with other communities for centuries, and they have survived an often-brutal history.”