Organized by The Whitney and Betty MacMillan Center for International and Area Studies at Yale, Africa Salon 2016 will bring cutting-edge artists, musicians, dancers, and thinkers to Yale and New Haven to present their work, share their ideas, and expand perceptions of Africa.

For details about this year’s lineup, visit the salon’s website. All events are open to the public, and most are free, but registration is required. The salon is sponsored by Stephen and Ruth Hendel ’73 and the Hendel Fund for Innovation in Africa.

Ifeanyi Awachie, curator of Africa Salon, and Michael Veal, professor of music, American studies, and African American studies, recently spoke to YaleNews about this year’s festival and its importance to Yale.

How did Africa Salon originate?

Awachie: In 2014, when I was working as a Woodbridge Fellow on the Africa Initiative, I proposed the idea of hosting a contemporary African arts festival as a way to fill a gap that I recognized in Yale’s programming on Africa, in which the arts are largely absent.

I was aware of Yale faculty and curators who were doing really excellent work on African arts, but they were scattered across the university. I recognized that we could have more programming where cutting-edge African artists could come to campus and engage with students in the same way that we invite experts on African politics and development and a number of similar subjects.

I convened Professor Veal and other stakeholders to discuss an event where we would bring together a number of African visual artists, musicians, designers, and dancers for a daylong festival at Yale — a lively event where people could experience African art firsthand and learn about it through that experience.

From there, through lots of planning — and learning — on my part and through collaboration with a number of important partners around Yale, Africa Salon was born. We held the first salon last year.

Veal: There are a lot of faculty members here at the university working on Africa-related content. But even though we have The Macmillan Center, most of the high-profile African-interest work going on at Yale is related to areas like public health or political science. Very little attention is being paid to expressive culture, which is one of the continent’s strongest exports.

The Africa Salon has helped to change that. Ifeanyi showed a lot of foresight in gathering all these scholars around the university whose work was concerned with Africa expressive arts and cultural elements and creating a forum to centralize that and help it grow.

What did you learn from last year’s inaugural Africa Salon that you considered in planning this year’s program?

Awachie: The feedback I got was that the salon was very intellectual and enlightening. I remember an African American audience member saying he wouldn’t learn about Africa from this point of view anywhere else. That’s something I’ve thought about constantly since then. Experiences like that show that the event was a success.

I particularly paid attention to the success of last year’s concert, our best-attended event, when I was planning this year’s festival. I realized that if our goal was to get as many people interacting with the art as possible, people were going to be most attracted to the most interactive elements of the salon — and I think of it as a festival. It was sort of academic in its first iteration, but I really wanted to increase the energy and move away from the panel structure to more performances and unconventional presentations.

Awachie: I agree, and we have several conventionally intellectual elements in this year’s salon, such as Africa Salon X Pecha Kucha, which Professor Veal is participating in, which is a presentation format where speakers will give relatively brief, lively, visual presentations on research and other work they are doing on Africa. My argument is that things like concerts and dance performances can be just as intellectual. I deeply believe that those kinds of immediate experiences can teach just as much as reading a text or seeing a film on your own, and then can be enhanced by conversations where you draw out the nuances and complexities of the art.

Why is Africa Salon important to Yale?

Veal: We have the School of Music, which is very famous, but it is devoted to western classical music. They’re not even really engaged with jazz there. We have the Yale School of Art, which is equally famous and has turned out many artists. They have the advantage of being engaged with contemporary arts but, by and large, they haven’t really engaged with the constellation of African visual arts. We also have had some of the most famous scholars of African visual art, such as Robert Farris Thompson, but that has not consolidated into a pronounced Africanist artistic presence here because the university really isn’t founded on that premise. It’s not devoted to that. It’s as simple as that.

The founding of the salon is great because it not only provides an opportunity to showcase African arts and make Yale and the wider community more aware of them, but it also does so here at Yale University — a world-class Ivy League institution. The fact that Yale has put its imprimatur on this event and has supported it in a number of ways, including logistically with venues, monetary support, etc., I think is a very good thing for African arts in general.

What western stereotypes and misconceptions about Africa and African culture does the salon attempt to address?

Veal: The very concept of a salon is predicated on this idea of art being showcased in a way that we associate with the western visual art tradition, literary tradition, cinematic tradition, etc.

Awachie: I think several events during the salon this year directly address stereotypes and misconceptions about Africa. For example, I think when many people think of African dance, they think of traditional West African dance, and we’re featuring Dzana, an urban dance troupe based right here at Yale, that is going to present dances that are done in the streets and clubs of African cities. African cities have extremely dynamic dance cultures in the same way that we have in American cities and other cities worldwide.

We’re showing a documentary, “The Pearl of Africa,” on the LGBTQ movement in Uganda, which will shed light on a set of experiences that many westerners may not know are also taking place in Africa.

We have a really exciting component called a Portal, which will facilitate one-on-one conversations between literary creatives — publishers, writers, spoken-word performers — in Nairobi and members of the Yale and New Haven communities. The Portal is a shipping container painted gold and equipped with a screen and audio capability so that when you enter the space you’re immersed in, basically, a full-body Skype. It’s as if you’re sitting down at a café with someone who is in a completely different city. That type of really personal engagement is going to do a lot to change people’s perceptions of what everyday Africans are like and what life is like in Nairobi today. 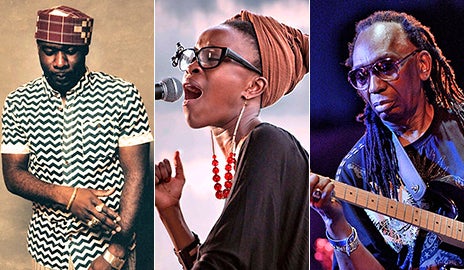 What’s planned for this year’s concert?

Awachie: I’m really excited about the concert this year. We have three acts performing at College Street Music Hall, the huge venue that opened in New Haven last year. Among our performers is Wambura Mitaru, a young singer-songwriter from Kenya. She attended the Berklee College of Music and performs music that can be most closely associated with soul but has African influences, too. We also have Ghanaian-American rapper Blitz the Ambassador. He’s very much inspired by Afrobeat, which is popular music from Nigeria but influenced by other West African countries. Finally, we have Thomas Mapfumo, who is huge on the continent. He is a Zimbabwean musician who has been performing since the 60s. He invented a genre of Zimbabwean music called Chimurenga. He is just legendary as a musician and extremely politically engaged. He’s been actively critical of the Zimbabwean government in constructive ways and now lives in exile in Oregon.

Veal: The concert will be fantastic. All the artists are very strong, and Thomas Mapfumo is one of the luminaries of contemporary African music both for political reasons and for musical reasons. It’s a fantastic lineup and very much a credit to Ifeanyi’s ability to put together a world-class event here in New Haven.