The preservation of cultural heritage will be the focus of the eighth Global Colloquium of University Presidents (UNGC) being hosted by Yale on April 12-13, along with a series of related public events from April 6–15.
By Michael Morand
Share this with Facebook Share this with Twitter Share this with LinkedIn Share this with Email Print this 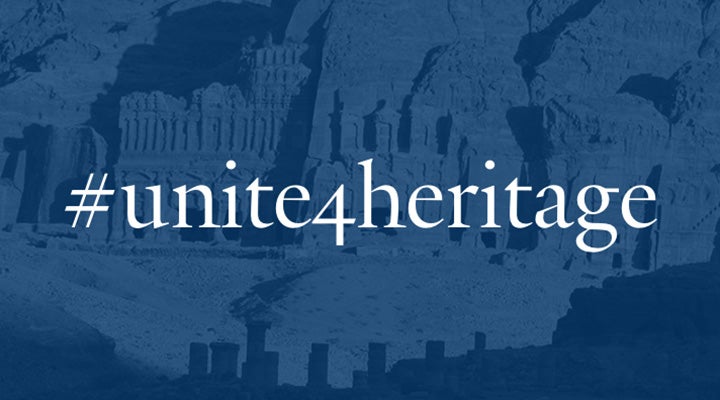 The preservation of cultural heritage will be the focus of the eighth Global Colloquium of University Presidents (UNGC) being hosted by Yale on April 12-13, along with a series of related public events from April 6–15. Information about the colloquium and public events can be found online.

“We want future leaders to appreciate the importance of cultural heritage and to pitch in protecting it,” Yale President Peter Salovey has said in discussing why he chose the preservation of cultural heritage as the focus for the colloquium, a meeting of university presidents and faculty from around the world on behalf of, and with the support and participation of United Nations Secretary-General Ban Ki-moon.

Secretary-General Ban will open the formal colloquium with a public address on Tuesday, April 12 at 4:30 p.m. in Sprague Memorial Hall, 470 College St. Plenary sessions for university presidents and invited faculty experts will take place the next day at the Yale West Campus.

The preservation of cultural heritage is gaining recognition as a global priority, with efforts by the U.N., UNESCO, and others to highlight its importance. At the same time, heritage is under threat like never before, experts say. “Cultural heritage is essentially what defines our humanity. Our identities are understood through the artifacts of our culture,” Salovey said while at the World Economic Forum earlier this year. “But they are in real danger today from human activity, war, natural disaster, and climate change.”

Participants in the 2016 colloquium include presidents and vice chancellors as well as faculty experts from universities in Brazil, Chile, China, Czech Republic, Ethiopia, France, Ghana, India, Italy, Japan, Jordan, Korea, Peru, Poland, South Africa, Sweden, Tanzania, Turkey, the United Kingdom, and the United States. A full list of participating institutions can be found on the UNGC website, along with a list of previous colloquia and their topics and host institutions.

“Yale has long been a leader in cultural heritage preservation, and Yale has extensive and growing partnerships with the U.N., as well as museums and universities around the world,” says Don Filer, executive director of Yale’s Office of International Affairs (OIA). “The university’s museums and libraries have such extensive depth and breadth in their collections, matched by a commitment to making these resources accessible to students, researchers, and the public, in person and online. Moreover, Yale has such a broad range of academic and professional disciplines and promotes cross-pollination among the arts and sciences.”

Stefan Simon, director of Yale’s Institute for the Preservation of Cultural Heritage (IPCH), notes that Yale is a leader in the field because of its “kaleidoscopic academic landscape” and culture of interdisciplinary collaboration. “Yale is not a vault,” Simon says, “but rather a launchpad for discovery and innovation, a place where people work across all disciplines and engage the public in a dialog about how better to preserve our global cultural heritage as a key element of human sustainability.”

The IPCH, OIA, and their campus partners have brought together more than 100 faculty, curators, and others at Yale to help organize the colloquium and related events. These include a workshop at the IPCH on “Culture in Crisis,” co-hosted with the Victoria & Albert Museum, which will convene stakeholders and decision-makers on topics including the efficient response to looting, illicit trade, the destruction of sites and urban fabric, the humanitarian impact, and loss of local skills, crafts, and indigenous knowledge.

Underscoring the importance of public engagement, Filer says, “President Salovey early on told the organizers that he wants this to be an opportunity for everyone on campus and members of the public to have an opportunity to learn more and consider the roles they can play in moving the preservation of cultural heritage forward.” To that end, Yale and its partners will host a series of satellite workshops, tours, talks, and exhibitions open to the public to coincide with the focused colloquium meetings for invited participants.

Public events will begin on Wed., April 6, with a talk on space and airborne-based approaches to ancient landscapes by Yale alumna and noted “space archaeologist” Sarah Parcak, winner of the 2016 TED Prize. Other highlights of the public events include a talk on April 14 by Richard Kurin, the Smithsonian Institution’s undersecretary for history, art, and culture.

Dozens of other talks, tours, and exhibitions will be open to the public before, during, and after the colloquium itself.  Visit the UNGC website to read more about these public events. Information on events will be added and updated in the coming weeks, so readers are encouraged to return to the website for the latest details as the colloquium approaches.

“Now is the right time to ‘#unite4heritage,’ as the global movement powered by UNESCO calls us to do, and Yale is a great place to bring people together to move this work forward,” Simon says. “At this moment, development and neglect, natural disasters and the ongoing effects of climate change are eroding our cultural heritage; militant groups are invested in cultural cleansing and destruction. At the same time, and more positively, cutting-edge research at the crossroads of science and the humanities provides us with unprecedented tools that allow for studying and preserving cultural heritage and for granting open access to the created knowledge.”

A comment Salovey made at the World Economic Forum echoes Simon’s: “This is the future of the past.”

Join the conversation on social media about the preservation of cultural heritage by using the hashtag #unite4heritage and watch YaleNews for more stories on the colloquium, related public events, and about the ways in which Yale faculty, students, staff, alumni, museums, libraries, schools, and departments are involved.