White House journalist talks about race, politics, and matters of the heart 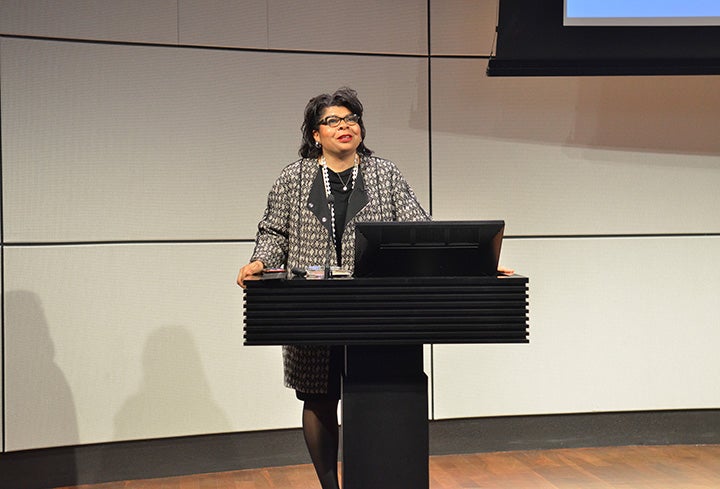 One of the most moving experiences journalist April Ryan has had during her 28 years of covering the White House happened while attending an art exhibition with former First Lady Laura Bush.

Bush had invited Ryan to walk from the White House across the street to the Corcoran Gallery of Art to see the exhibition “The Quilts of Gee’s Bend,” featuring handmade quilts by the descendants of slaves from the formerly plantation-rich hamlet of Gee’s Bend, Alabama. On the way over, Ryan and the former First Lady shared tales of their own grandmothers’ quilt-making. At the tail end of the exhibition, the two met a group of elderly Alabama quilt-makers who, upon seeing Bush, embraced her.

“Tears were flowing,” recounted Ryan in a talk in the School of Management’s Evans Hall, where she spoke as a Poynter Fellow in Journalism on Feb. 25. “The [elderly black women] started saying ‘Thank you, Jesus,’ and tears were flowing. They just wanted a little recognition of their lives. It was one of my most impacting times in the White House.”

Ryan, who has been White House correspondent and the Washington bureau chief for American Urban Radio Networks since 1997, said that the experience at the gallery was a reminder of how simple human connection supercedes racial divisions, politics, or policy in matters of the heart. For the quilters, the First Lady’s presence at the show and her admiration of their work bonded the women.

The author of the recent book “The Presidency in Black and White: My Up Close View of Three Presidents and Race in America,” Ryan spoke about issues of race during the presidencies of Bill Clinton, George W. Bush, and Barack Obama from her vantage point as White House correspondent.

She recalled how, just months after the visit to the quilt exhibition, Hurricane Katrina hit New Orleans, and then-President George W. Bush was widely criticized for the government’s response to the natural disaster, which hit poor, black communities the hardest. Rap music star Kanye West suggested at a benefit concert that the slow federal response to the disaster was because Bush “doesn’t like black people.” Ryan said that Laura Bush responded by saying that the nation could not see what was in her husband’s heart in the way she did.

Ryan attributed the harsh reaction of many African Americans after Katrina to the President’s — and the Bush administration’s — failure to engage their community during his presidency.

“Race comes to every president in one way, shape, or form,” she told her audience. “There’s this variable that you don’t expect, and it came [to Bush after Hurricane Katrina]. If they would have given a little bit more time and a little bit more effort [to the needs of African-American communities], that wouldn’t have hit so hard. It’s a legacy for him that he’ll never walk away from. Do I think he’s a racist? No, not at all.”

Bush did more than any other American president on behalf of Africa, said Ryan, contributing to humanitarian aid, funding for research and treatment on HIV/AIDS, and an initiative to fight malaria on the continent. She also recalled that, during a private interview with Bush, he acknowledged the existence of both subtle and overt racism in America, and she said that the Bushes were incredibly “gracious” during the transition to the Obama presidency, including overseeing a meticulous cleaning of the White House to welcome the new inhabitants. She added that she believes Bush’s absence from political life since leaving office is his way of “protecting” the current president.

“He understands that this president has issues to deal with beyond politics,” Ryan said of Bush. “Race and politics will always follow this current president because of the unique nature of who he is. I say that because it’s the truth. … I believe he [Bush] had a heart to understand the racial dynamics and wanted to change the appearance of who he was.”

Ryan said all of the three presidents she has covered as a journalist failed to apologize for American slavery, noting that any such apology for the nation’s history necessitates a discussion of reparations.

Bush, she said, chose not to make an apology because he held African nations partly accountable for the slave trade, and the Obama administration recognized from the start that an apology could not be meaningful coming from a black president. Clinton, she commented, “came so close” during a trip to Africa to being the first president to acknowledge American responsibility for the stain of slavery.

Ryan blamed then-White House chief of staff and now Chicago mayor Rahm Emanuel and others in the Clinton administration for halting that action.

“They didn’t want to apologize for slavery because if [Clinton did], there would have to be a policy for restitution or reparations,” said Ryan.

Throughout her talk, Ryan referred to Clinton as “the first black president,” using a moniker first coined by African American author Toni Morrison. One of the highlights of her career, she said, was having Clinton take part in a soul food dinner with her and other black journalists. Noting that while Clinton had established an Initiative on Race to foster national dialog on the issue, she said he did not meet independently with black journalists for off-the-record conversation as he regularly did with members of the mainstream, white-dominated media.

“That night was magical,” she said of the dinner, which took place the night before a memorial service for John F. Kennedy Jr. “The President came in with his sleeves rolled up, as if he was on the campaign trail, and we had a conversation that began at 7:30 p.m. and lasted until they had to pull him out at 11 p.m. We were talking about everything under the sun.”

During that conversation, Ryan asked Clinton why he didn’t make his apology for slavery, and he answered, “Because black people can’t come together” on the issue of reparations.

“We know this,” said Ryan. “He had every group of black people saying something different. If there had been a coming together, imagine what would have happened.”

Ryan suggested that the black community had become “too complacent.”

“The most successful movement in the nation was the civil rights movement,” she contended. “Everyone has taken that blueprint — the LGBT community, women’s rights groups, the Latino community, immigrant groups — but for some reason the black community dropped it. Now there’s an attempt to leverage it: Black Lives Matter is trying to go back to that. The squeaky wheel gets the oil. … Anyone who goes to the White House on a consistent and persistent basis with massive numbers is heard, and when you don’t, it doesn’t happen.”

Another highlight of her journalism career, she said, was watching from the White House the elation of young people on the night Obama was elected president. She said she sat, stunned, for a while, as did some of her journalist colleagues.

“I thought there would be a white woman before there’d be a black man” as president, she commented.

Ryan told her audience that she wrote her recent book to help start a conversation about issues of race, which she said in her talk “plays a factor in almost every facet of life.”

“We have 11 months left — whether you like it or not, whether you are for or against Obama — of this historic presidency,” said Ryan. “In the midst of this, we have elections going on. … The question is: How do we handle it? … We have people talking about keeping the Muslims out. We are a nation of ‘bring me your tired, poor, and hungry.’ We are a nation of native slaves and immigrants, and we are walking away from that. We are seeing more talk about the division than the unity. And that’s one of the reasons why this book is so important today. It’s about policy, but it’s also about the heart. I hope I have given you something to chew on a little bit.”

During her talk, the journalist also told her audience that the elderly siblings who were injured this week in a shooting in Baltimore are her uncle and aunt, and she received a text message during the event informing her that a suspect had been identified in the shooting. She posed a question to the white members of her audience:

After her talk, the journalist answered questions from Eileen O’Connor, Yale’s vice president for communications who once shared working space in the White House with Ryan while reporting for CNN, and from members of her audience. She discussed issues ranging from the role of social media in today’s politics to Republican obstructionism of Obama’s efforts and policies. Afterwards, she was presented a certificate of appreciation by New Haven Alderwoman Jeannette L. Morrison on behalf of the city’s entire Board of Alders, and signed copies of her book for many of the event’s attendees.