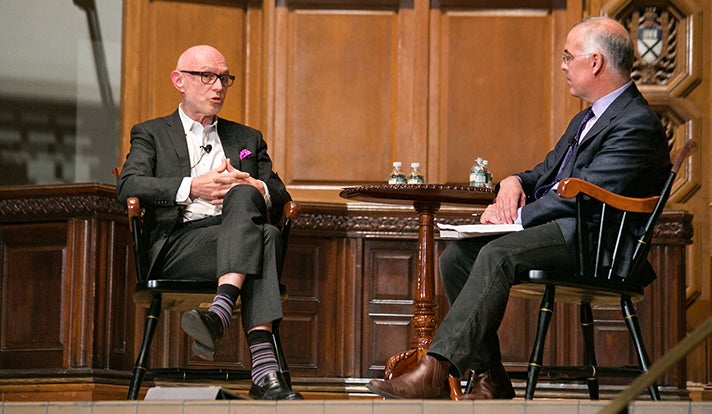 In a conversation on “Character, Flourishing, and the Good Life” on Feb. 22, New York Times columnist David Brooks and Yale theologian Miroslav Volf agreed on at least one major point: In today’s world, people are “thirsty” to find deep meaning in their lives.

Volf, the founder and director of the Yale Center for Faith and Culture and the Henry B. Wright Professor of Theology at Yale Divinity School, and Brooks, who also teaches Yale students as senior fellow at the Jackson Institute for Global Affairs, shared the stage before a capacity audience in Battell Chapel, asking each other questions about what makes for a good life — a “life worth living.”

Both speakers have recently written books exploring that subject. Volf’s book “Flourishing: Why We Need Religion in a Globalized World,” was published by Yale University Press in January. Brooks is the author of “The Social Animal: The Hidden Sources of Love, Character, and Achievement” (2011) and, more recently, “The Road to Character,” published by Random House last year.

Volf — who developed and co-teaches the undergraduate Humanities Program seminar “Life Worth Living” (see related story) as well as the Yale Divinity School course “Christ and the Good Life” — told the audience that the great religions of Christianity, Judaism, Buddhism, and Islam “are our most potent repository of visions of the good life” and what it means to have a life that is “flourishing.” He argued that while religion itself is a cause of increasing tension and conflict in today’s globalized world, religions are embraced by the majority of the world’s population and still offer a valuable set of standards and principles by which humans can measure themselves and their lives.

In his view, Volf said, a flourishing life is one that is inextricably tied to humanity as a whole.

“I cannot flourish if others in the world are not flourishing,” said Volf, adding that an important dimension of all of the major religions is a belief in the equality of every human being and a love of neighbor.

“I think religion offers a sense that your life is not primarily about yourself,” he said, adding that religions challenge believers to think about something larger than oneself and “to give us something that is transcendent.” He said that this was especially important in today’s market economy, in which in a desire for consumer goods leaves humans “running faster and faster to stay in the same place.” Religion can serve as a counterculture to capitalism, which, Volf said, has eroded and even destroyed the flourishing of people as a global whole.

In their focus on transcendence of “ordinary life,” religious traditions “free us from being compelled to pursue new gadgets,” Volf contended.

Volf told the audience that there are three main components of a good life: a sense of peace derived from knowing that one’s life is going well in terms of its circumstances, including physical well-being; “life being led” — or a need to act on behalf of oneself and others; and the sense that life “feels right” or good. In the Judeo-Christian traditions, he said, these could be summed up as “peace, righteousness, and joy.”

“Everything depends on these three being present,” said Volf, adding that a flourishing life can be defined as one in which these characteristics are sustained over the course of an entire life, rather than sporadically. 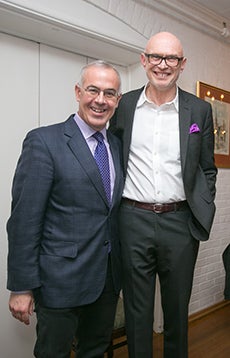 Asked by Brooks whether the world has been torn apart by both religion and globalization, Volf acknowledged that the world is experiencing a “profound crisis.” He said that by bringing the world together, globalization has “in some ways accentuated” religious differences, but he argued that world religions are the original “globalizers” because they share common universal precepts that can also unite humanity.

He argued, however, that today’s world has witnessed a “secularization” of religion, in which “increasingly, religions are being pushed to become less religious” and more focused on individual prosperity. The more religions become “servants” of economic and political systems, he said, the more “they betray their original character” and teachings.

Instead of religion, Brooks emphasized morality as a component of a good life.

His own interest in exploring what makes a good life, Brooks said, was the result of a personal realization that while he had achieved career success, he did not have an “inner light” and joyful tranquility that he had witnessed in some others. In his book “The Road to Character,” he noted, he characterized the successful achievement-focused person as Adam I, and the person for whom lofty things could be said in their eulogies — those with that inner light — as Adam II.

“People have a clearer sense of how to build a career than how to build good inner character,” Brooks told the audience.

In the “The Road to Character,” Brooks highlighted the lives of a number of individuals who, he believes, have admirable life virtues, among them Christian theologian and philosopher St. Augustine; Catholic social activist Dorothy Day; statesman and former U.S. president Dwight Eisenhower; U.S. statesman and soldier George Marshall; and English writer and scholar Samuel Johnson.

All of those whose stories he featured in his book, he said, were “pathetic at age 20 but kind of magnificent at age 70.”

He outlined the common character-building characteristics they shared, which included a deep commitment to a vocation, as well as to a faith or philosophy, to community, and to espousing their faith.

Brooks said he wrote the book with the goal of introducing issues of morality into conversation in the secular sphere, including the concept of sin. One way to achieve a flourishing life, he said, was to “identify your sins, then try to stamp [them] out.” This, he added, is what humility is, “the ability to see one’s strengths and weaknesses” and then to “confront [one’s] broken nature.”

Unlike Volf, who stressed the lasting nature of a flourishing life, Brooks told the audience that he believes there are gradations of happiness and moments of joy, and that these, too, are part of a flourishing life. He gave the example of a woman depicted in the book “Man’s Search for Meaning,” who is awaiting her own death in a concentration camp. She describes her happiness in seeing a tree, which she considers to be her only friend, and claims the tree “tells” her, “I am life, I am eternal life.”

“I would say in that moment that she’s flourishing,” said Brooks.

Brooks criticized the current cultural focus on what he called “the Big Me,” noting that the majority of college students prioritize a desire for fame over most other desires. While self-promotion and self-marketing may be necessary for an entrepreneurial founder of a start-up, he said, a quest for fame alone will not lead to a meaningful life.

“If that’s all you are, you will turn into Donald Trump,” said Brooks. “You will have no inner life. My sense is that that is a bad thing in the long run.”

Brooks outlined four qualities that he believes do lead to a life rich in meaning: the experience of great love; overcoming of hardship or suffering (suffering “introduces yourself to yourself,” he said); a deep involvement in active service to others without a desire for validation; and learning from other thinkers by reading the “great books” of Western civilization.

He said that on his own book tour, when speaking before even the most successful CEOs, his presentations about living a life of character have been met with an awed silence, which he said reflects the intense desire of people to find deeper meaning in their lives.

“People are so thirsty, which is why your class is so important,” Brooks told Volf.

Brooks concluded by saying that colleges and universities play an important role in helping students discover their own value system by offering them “moments of transcendence” and exploration, and arousing in them passion and beauty.