Popular Scottish production to be staged on campus 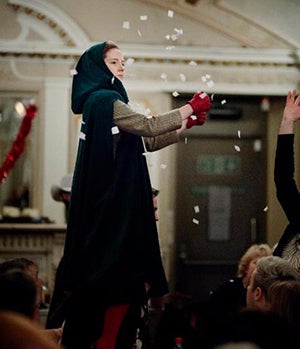 “The Strange Undoing of Prudencia Hart,” a National Theatre of Scotland production that had its U.S. premiere at the 2012 International Festival of Arts & Ideas in New Haven, will be back for a limited run March 31-April 3 on the Yale campus.

Again presented by the International Festival of Arts & Ideas, the interactive performance of “supernatural storytelling, live music, and frolicking theater” will be staged at Gryphon Pub at the Yale University Graduate and Professional Student Club (GPSCY), 204 York St.

Prudencia Hart, as the story goes, is an uptight academic who sets off one wintry morning to attend a conference in Kelso in the Scottish Borders. As snow begins to fall, little does she know who or what awaits her there. Inspired by the historic Border Ballads, Robert Burns, and Gaelic culture, dialogue is delivered in a “riotous romp of rhyming couplets amid devilish encounters and wild karaoke,” according to the festival’s press release announcing the production.

“We are thrilled to welcome ‘Prudencia’ back to New Haven…,” says Mary Lou Aleskie, director of the International Festival of Arts & Ideas. “Staging it at GPSCY resonates on several levels. The title character is a folk-studies scholar on her way to an academic conference and the venue provides a rare opportunity to experience a place typically used exclusively by the Yale community. Reprising ‘Prudencia’ provides the perfect celebratory kick-off for this year’s festival June 10-25, a highlight of which is the U.S. premiere of the National Theatre of Scotland’s musical powerhouse ‘Our Ladies of Perpetual Succour,’ named one of the top 10 stage plays of 2015 by The Guardian.”

“The Strange Undoing of Prudencia Hart” premiered in Glasgow in 2011 before achieving critical acclaim at the 2011 Edinburgh Festival Fringe. In keeping with the site-specific origins of the show, the production is staged in bars, taverns, breweries, pubs, town hall, and other unlikely venues for an immersive audience experience. Created by writer David Greig and director Wils Wilson, the folk fable has been part of the National Theatre of Scotland’s touring repertoire since 2011, and has traveled extensively across the United States, the United Kingdom, and internationally to sold-out performances.

Annie Grace, Alasdair Macrae, David McKay, and Paul McCole comprise the ensemble cast with Scottish actress Jessica Harwick, who was most recently seen in “Lanark” at Citizens Theatre and the Edinburgh International Festival.

Performances are at 8 p.m. Wednesday-Saturday, with an additional 3 p.m. show on Saturday and a 3 p.m. show on Sunday. General admission is $45. Food and beverages are available for purchase before and after the show and during intermission. The production is recommended for ages 14 and over, and all attendees under the age of 21 must be accompanied by a parent or guardian.

For tickets and more information, visit the International Festival of Arts & Ideas website.