Three Yale students — two from Yale College and one from the Yale School of Architecture — are among 35 young U.S. citizens who have been awarded prestigious Gates Cambridge Scholarships for study at the University of Cambridge next year.

Yale College seniors Joshua Feinzig and William Theiss, and School of Architecture student Sofia Singler M.Arch. were selected from among 826 U.S. applicants for the award and were shortlisted for interviews by academics at the Gates Foundation headquarters at the end of January. They and the other 32 other U.S. Gates Cambridge Scholars will join about 55 scholars from other parts of the world; the international scholars will be announced in early April.

The highly competitive postgraduate scholarship program was established through a $210 million donation in 2000 to the University of Cambridge from the Bill and Melinda Gates Foundation, which remains the largest single donation to a university in the United Kingdom. Since the first class of scholars in 2001, more than 1,500 Gates Cambridge Scholarships have been awarded to men and women from 103 countries and 600 universities. Annually, more than 4,500 individuals from around the world apply for 90 scholarships.

“The 35 U.S. Scholars-elect are a highly accomplished and diverse group who have already achieved much in terms of their academic studies, leadership abilities, and commitment to improving the lives of others,” said Barry Everitt, provost of the Gates Cambridge Trust. “We are sure they will flourish at Cambridge as Gates Cambridge Scholars and have substantial impact across many areas in the future.”

Next fall, the scholars will be members of 28 academic departments at the University of Cambridge, where they will study and research subjects ranging from the health implications of a sugar tax to the role of schools in preventing obesity to antibiotic resistance to new treatments for cystic fibrosis to bat-borne viruses such as Ebola. Scholarships were awarded to 15 women and 20 men. 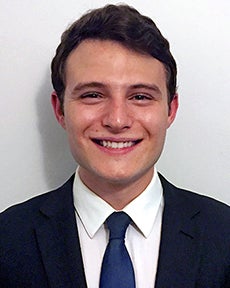 Joshua Feinzig will work toward a M.Phil. degree in criminology through the Institute of Criminology at Cambridge. As an undergraduate studying ethics, politics, and economics at Yale, he focused on the intersection of criminal justice and political theory, with an emphasis on the intellectual history of punishment and state justifications for mass incarceration. While at Yale, he served as a city commissioner in New Haven and co-founded an alternative regional juvenile justice court system grounded in restorative principles.

“I seek to integrate political and moral philosophy into criminology, in the hopes of imbuing criminal justice policymaking with new theoretical considerations to further the development of alternatives to incarceration across the world,” Feinzig said in his Gates Cambridge profile.

“I believe that to rebuild public trust and reinvigorate civic possibility, American cities must develop restorative criminal justice systems by drawing upon local community values and mores of inclusion,” he added. “At Cambridge, I will seek to continue applying social scientific frameworks to develop new alternative diversionary models, while also considering how criminal justice police normatively shapes ideas about race and citizenship. I’m honored to be joining the Gates Cambridge community and working with others so deeply committed to social justice and the public good, and I look forward to the friendships and collaborations ahead.”

Singler’s doctoral work at Cambridge, she said in her award profile, “will examine how Aalto’s ecclesiastical oeuvre can enrich our understanding of the relationship between religion and modern architecture, and revise misleadingly uncomplicated assumptions concerning their mutual exclusivity. Modernism’s veneration of reason is commonly accepted as evidence of a project of total secularization; its self-proclaimed belief in the rational, precise, and machine-produced has led to insufficient appreciation of its ability to endure doubt and uncertainty, key themes in 20th-century theology.”

“An understanding of the built environment in its full cultural context is a civic responsibility and privilege that, at best, cultivates a critical approach to architecture in the next generation’s thinkers — it is this gift that I aim to give back to others,” she said. “Thanks to the generosity of the Gates Cambridge Trust, I will dedicate myself both to Aalto scholarship and to children’s architecture education, this time as a teacher rather than a pupil, and in so doing reinforce broader appreciation of the discipline’s agency as a societal project.”

William Theiss will work toward an M.Phil. in early modern history. He is now finishing his B.A. in comparative literature at Yale, where he also studied ancient and modern languages, including Latin, ancient Greek, and biblical Hebrew. His senior thesis is on the topic of humanists and humanism in early modern Europe.

“I got hooked inescapably on pedagogy when, last summer, I taught a Latin class to students in Brooklyn, New York,” he wrote in his profile. “With Cambridge’s M.Phil. in early modern history I will investigate the history of learning in early modern Germany; as a historian I intend to address the legacy of classical humanism and the dark arts of scholarship. I am honored to be a member of the Gates community.”