If Brandon Stanton had waited for his own skills and ideas to be perfect before starting Humans of New York (HONY), the now-wildly successful blog would never have happened, he told a packed audience in Battell Chapel during his campus visit as a Poynter Fellow on Feb. 9.
By Susan Gonzalez
Share this with Facebook Share this with Twitter Share this with LinkedIn Share this with Email Print this 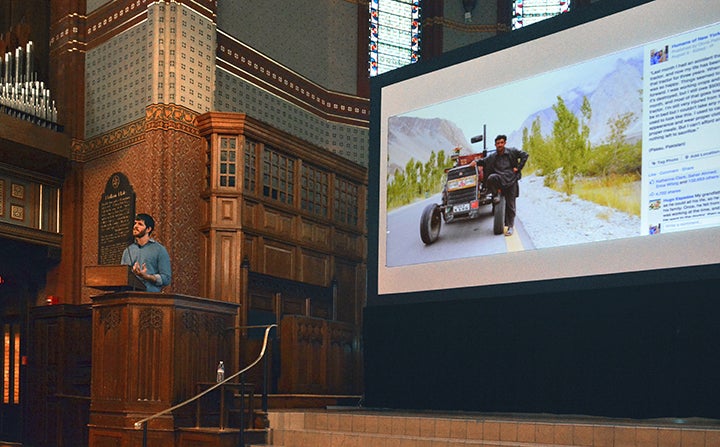 If Brandon Stanton had waited for his own skills and ideas to be perfect before starting Humans of New York (HONY), the now-wildly successful blog would never have happened, he told a packed audience in Battell Chapel during his campus visit as a Poynter Fellow on Feb. 9.

His idea for the blog came about just months after he bought himself a camera and began taking photos, first of scenes around Chicago, where he worked, and, later, of people, Stanton told the audience.

He had been a bonds trader when the financial crisis hit, and “it became apparent that I was going to lose my job,” he recalled. He said he spent two frantic years “completely consumed with trading and money” as he fretted about his future.

“I was so scared about losing my job,” he said. “Then, the day it happened was unexpectedly a good day because even though what I had been thinking about, obsessing about, had actually happened, suddenly there wasn’t anything to obsess about anymore. For two years, all of this energy and thought I had put into trading, to retaining my job, was suddenly freed up. I began looking around at all these other possibilities of what I could do.”

He also made a decision at the time that, looking back, was “momentous,” he said.

“I thought: From here on out, I’m going to make just enough money that I can do what I want with my time,” he said. “… At the time, what I enjoyed most was photography.”

He recalled a second moment that helped spur his idea for the blog: overcoming his fear in order to take a picture of two young boys on the subway with their mothers. He projected the image on a large screen for his Yale audience, showing the boys looking up with the exact same expression on their faces.

“It was the first photo I’d ever taken of a person,” he said. “Now that I’ve photographed 10,000 people, I have to remind myself how scared I was to take that picture … Because I forced myself to get over a fear that everyone has, I realized at that moment that if I could continue to do that, I could create a kind of photography that was somewhat unique because it was scary to do. It’s scary to walk up to strangers you want to photograph, to even ask their permission. Even if I did not become the best photographer in the world, I realized that if I did this over and over again, maybe I could create something that people would be interested in.”

After photographing people in different cities, Stanton decided to move to New York, with the idea of stopping 10,000 people in the street, taking their portrait, and placing the photos on a map.

His HONY blog, he recounted, began in 2010 with just photographs, but one of those images — of a woman with green hair dressed entirely in green — inspired him to add text.

“The photo was not that great, so I didn’t think I’d post it,” he said. “Then I got sick that day, and didn’t have photos to post. I remembered what the woman said. She said, ‘I used to be a different color every single day, but one day I wore green, and that was a good day, so I’ve been green for 15 years.’” That photo with her comment got 17 Facebook “likes” — the most he’d received up to that point for a photo on his blog. 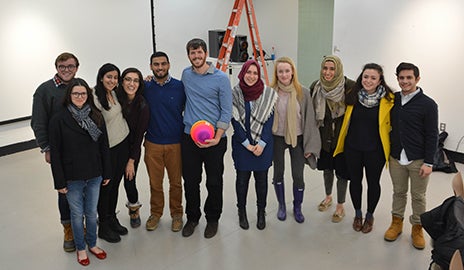 So began HONY’s current format, a portrait with a quote from the person pictured. Stanton said he spends anywhere from 45 minutes to 2 hours interviewing his subjects.

“It’s not a photography blog,” he says. “You can call it a storytelling blog. … I’ve learned to do it in a way where I can create in a bubble of intimacy, compassion, where random strangers feel comfortable sharing things about their lives that maybe they haven’t told their best friend or their significant other. Oftentimes, they might not have told the people closest to them. Why? Because the people closest to us have the most information about us to judge us on. There is something cathartic and easy about telling your story to someone who has no preconceptions of you, against which to weigh your experiences — someone who is taking you at face value.”

While sharing their stories might make his subjects feel “vulnerable” and “exposed,” said Stanton, that is outweighed by “this feeling of validation that comes from somebody taking a sincere interest in what you’ve gone through.” He explained that he asks his subjects meaningful questions about their lives — such as their saddest moment, what they are afraid of, what they feel guilty about, or their biggest accomplishment.

His blog has featured people ranging from refugees to the homeless and, most recently, federal prison inmates. Stanton said that his subjects are often people who might otherwise go unnoticed.

“There’s a lot of people who don’t have anything but their stories,” he told his audience. “They have no friends and they don’t think anybody cares about their story or don’t think anything they do has relevance. So when someone [like me] comes up to them, it might be the first person who has talked them seriously in months. In New York City, there are a lot of lonely people. To have somebody not only talk to you but think that what you have to say is valuable — that past things that have happened to you mean something — that’s a very empowering feeling.”

The HONY founder eventually decided to feature people outside of New York City on the blog, including those he met on a U.N. trip and on journeys in Pakistan, Iran, Syria, and other places. He said that he found people in the Middle East more “hospitable” than those in New York City, who are “naturally guarded.”

“Nowhere is tougher than New York City,” he added.

Stanton showed one photograph of a man in the mountains of rural Pakistan who he met along the road; the man described his despair after having wrecked a tractor he had saved up for his entire life. He was forced to rent another tractor, which sucked up all of his earnings. Upon seeing his story, HONY followers raised $8,000 to buy him a new tractor. 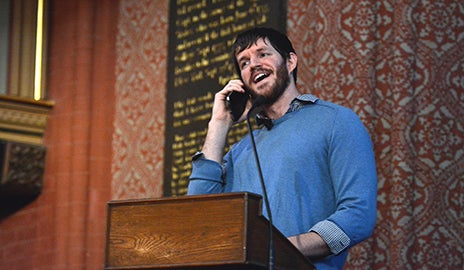 Since the blog began, HONY has crowd-funded $5 million in support of Syrian refugees, a New York City school, and other causes, Stanton noted.

“The 15 million people who follow HONY are the 15 million nicest people on the Internet,” he said. “It’s a powerful group of people because they care; they show up. … [I]f people criticized, mocked, ridiculed — no one would let me take their photograph. The work attracts that [caring] group of people, and that’s why we’re able to do so many great things.”

Asked during the Q&A session how he — as an artist — handles rejection or criticism, Stanton replied: “You have to root your identity in the work and not the reception. The only thing you can control is how much you work.” Rather than think of himself as an artist, he said, he likes calling himself “a dude who stops people on the street and does it every day and works hard.” Despite his success, he said, he still gets “treated like dirt every day” by those who refuse his invitations to be interviewed.

He was also asked about the emotional burden of interviewing people who are experiencing severe hardships. While he has personally helped some of the people he has met on the street, he said, “Everyone I met has immense need. … It would become impossible both emotionally and financially to have an impact beyond telling their story. … I have to believe that I’ve made an impact just by telling their story.”

Addressing the Yale students in his audience, Stanton said he hoped that some of them might be inspired by hearing his story.

“I know that as a whole, you guys are very successful,” he said. “You’re here. You are probably used to success, possibly so used to success that the possibility of failure can seem very daunting. I didn’t have that problem. I messed up so many times. But if I did have the problem, I might have sketched out my plan, asking other people’s opinions … I would have planned the risk out of it, and [HONY] never would have happened. …

“You can’t wait until your idea is perfect because it’s never going to happen,” he continued. “You’ve just got to commit yourself to doing what you want to do, and then start doing the work for it, and trust it.”