Platelets, the colorless blood cells responsible for clotting, play a critical role in controlling inflammation, but their effect on the immune system is less clear. A new Yale-led study has identified a protein from platelets — Dkk-1 — that contributes to chronic inflammation and has also revealed the role of platelets in the immune response. 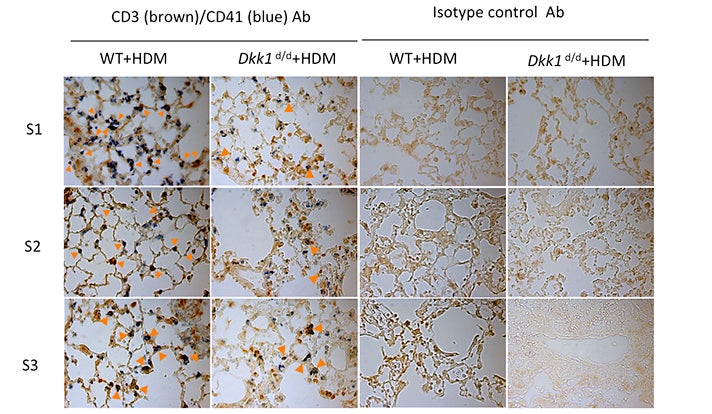 The research, published in the Feb. 9 issue of Immunity, could lead to the development of new therapies to treat severe asthma and other inflammatory diseases, say the researchers.

Chronic inflammation is commonly found in asthma, autoimmune diseases, cancer, and viral infections, and it’s characterized by constant activation of platelets with unhealed tissue damage. Scientists who have studied the Dkk-1 protein were aware that it inhibits tissue repair. To investigate the role of Dkk-1 in various inflammatory diseases, professor of immunobiology Dr. Alfred Bothwell and his co-authors studied the effect of the common house-dust mite and a parasite on normal mice and those lacking Dkk-1. They found that by blocking Dkk-1 genetically or pharmacologically, the animals were protected from asthma and parasitic infection.

The results demonstrated a functional and physical link between platelets and lymphocytes via Dkk-1. “Remarkably, without the presence of Dkk-1, both innate and adaptive immune responses for chronic inflammation could not be triggered,” said Dr. Wook-Jin Chae, associate research scientist from immunobiology and first author. “Because Dkk-1 is from platelets and it inhibits tissue repair, now we know how platelets become an essential part of the immune response and tissue repair simultaneously in response to inflammation.”

With this new finding, Bothwell and Chae established a new target for treating inflammatory diseases. “The potential in other chronic diseases such as cancer and autoimmunity is enormous,” said Bothwell. The next step is to harness Dkk-1 in cancer immunotherapy. “We are looking for small molecule compounds that could block Dkk-1-mediated signaling in the inflamed tissue,” the authors said.