Reporters tend to cover bad news, but in her own work Pulitzer Prize-winning author Sheryl WuDunn is also interested in writing about solutions, she told her audience at a master’s tea at Timothy Dwight College (TD) on Jan. 25.
By Susan Gonzalez
Share this with Facebook Share this with Twitter Share this with LinkedIn Share this with Email Print this 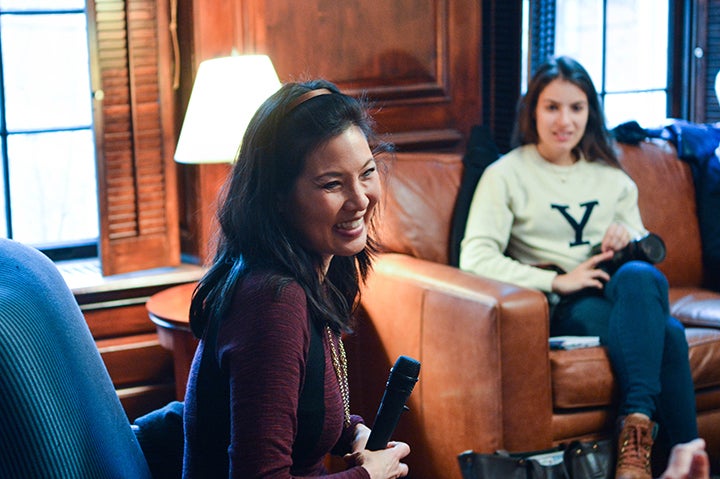 Reporters often cover bad news, but in her own work Pulitzer Prize-winning author Sheryl WuDunn is also interested in writing about solutions to world problems, she told her audience at a master’s tea at Timothy Dwight College (TD) on Jan. 25.

WuDunn visited the campus as a Poynter Fellow in Journalism having earlier that day received the International Festival of Arts & Ideas’ annual Visionary Leadership Award, presented to “a leader whose trailblazing work is impacting the world,” according to the festival’s website.

WuDunn is the first Asian-American winner of the Pulitzer Prize, which she won in 1990 with her husband, New York Times columnist Nicholas Kristof, for their coverage of the Tiananmen Square protests in 1989. The couple has since written four best-selling books: “China Wakes: The Struggle for the Soul of a Rising Power”; “Thunder from the East: Portrait of a Rising Asia”; “Half the Sky: Turning Oppression Into Opportunity for Women Worldwide”; and most recently, “A Path Appears: Transforming Lives, Creating Opportunity.” The latter offers advice on how citizens can best contribute to social change.

“We wanted to focus on solutions, because most reporters tend to write about the bad news, because that’s what ‘news’ is,” WuDunn said at the tea, where she was interviewed by TD master Mary Lui. “We were trying to say: ‘Look, there are so many solutions that people aren’t writing about.’ We found so many ideas that people were implementing.”

The “most important solution” to ills all over the world, WuDunn said, is early childhood education.

“Early childhood education is one of the most cost-effective ways of breaking the cycle of poverty,” she said, noting that a child’s brain develops at the fastest pace in the first few years of life. She said that if children are not being read and spoken to at that early stage, and being shown love and affection, their brains “close off.” WuDunn lamented the situation in Flint, Michigan, where children have been exposed to lead in the drinking water, saying, “It’s so sad. Lead is getting in their water when they are 2, 3, 4 or 5 years old — at such a critical stage of their development.”

At the tea, WuDunn shared her own path into journalism. She originally planned pre-med study at Cornell, she said, but switched to history because her adviser was a historian and then discovered she loved the field. After graduation, she worked in banking before moving to China with Kristof.

Once in China, she said, she considered working for a bank or starting her own business there, but quickly realized the fault of her plans.

“There was no banking in China then, and starting my own business in a Communist country wasn’t going to work,” she said. “So I tried the journalism route. I got lucky. There was a lot to cover at the time. Living in China made me more of a capitalist, because I could see all of the problems of socialism.”

In Beijing, WuDunn began working for The New York Times, reporting on the pro-democracy movement there. Her first story was one of her favorites, she said. It was about a woman from Hunan Province who advanced from being a guide for executives at Honeywell to being an executive with the company.

“It was so inspiring to see someone who grew up in a Communist country and had no business background climb her way up,” WuDunn said. “She just blossomed.”

At a gathering of student activists at Beijing University, WuDunn heard students argue that it was time for them to “stand up for their rights.”

“I thought: ‘Yeah, this is going to go somewhere; it’s a communist country,’” she said, recalling her cynicism about the students’ call for democracy. “Boy, was I wrong.”

When soldiers fired into the crowd of protesters in Tiananmen Square, she ran away from the shooting while her husband ran toward it, she recalled. During her frantic call to the Times her editor urged her to stay calm and to start counting bodies.

“[As a journalist], you’ve got to get the facts,” WuDunn said, noting that having a sense of the numbers of protesters killed was especially important because the Chinese government was “low-balling” the number of deaths. She and other reporters, she said, began to call hospitals in the hope of getting an accurate count.

One of the biggest challenges she faced reporting in China, WuDunn said, was that she and other reporters were constantly being followed by government agents.

“You have to be careful about who and where you are getting information from,” she said. “You constantly had to look around to see who was behind you. Sometimes it was just to scare us, to back us off, sometimes not. It was a huge psychological burden.”

She and Kristof also traveled to China’s more rural areas to research the spread of the democracy movement. There, they learned about the 30 million missing females in China, girl babies who were either killed or were not being reported because of the one-child policy of the Chinese government at that time.

“Thirty million babies, what are the implications?” she and Kristof wondered, she recalled. “What we know now is so horrible. There are so many more men in China that they can’t get married because there are not enough women for them.”

WuDunn said that she and Kristof later discovered an estimated 60 to 100 million missing women and girls worldwide, which led them to write their book “Half the Sky,” about the oppression of women and girls in the developing world and strategies to help them.

Asked how aspiring journalists can follow in her footsteps, WuDunn told them there is no one path, and urged them to be open to all of the possibilities in their lives that may lead them to their ultimate dreams. Those who do become journalists, she said, will find the stories that need telling by asking themselves: “What do people want to read? What don’t they know about? What angle do I write from?”

Whatever their career in the future, WuDunn urged student members of her audience to use their skills for the greater good of humanity by helping to bring about social change.

“We need people from all walks of life,” she said, telling the students that even non-career-related skills that they learn at Yale will be useful in solving challenging global problems. To illustrate that point, she told her audience about an epidemiologist who focused his career on trying to stop infectious diseases in refugee camps, and later applied some of those strategies in an effort to curb gun violence in Chicago as the founder of CURE Violence.

“He saw that violence is kind of like infectious disease,” she said, noting that using his expertise in solving problems abroad has helped reduce violence at home.