Penelope Laurans, master of Jonathan Edwards College (JE) since 2009, special assistant to the president since 1993, and a teacher in the English department for 43 years, will step down from her posts at the end of the academic term.
Share this with Facebook Share this with Twitter Share this with LinkedIn Share this with Email Print this 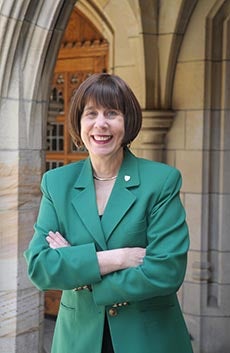 Penelope Laurans, master of Jonathan Edwards College (JE) since 2009, special assistant to the president since 1993, and a teacher in the English department for 43 years, will step down from her posts at the end of the academic term.

During her tenure at Yale, she also served for seven years as director of the office of Summer Programs and Conference Services (as it was formerly called) and was the associate editor of the Yale Review.

In a letter announcing her upcoming retirement, President Peter Salovey wrote: “Whether you have crossed paths with Penny once (perhaps at a campus sports event or a music, dance, or theater performance), or have had the pleasure, as I have, of working closely with her over the years in many different areas of Yale life, I know this news will strike you as signaling the end of an era. For truly, Penny Laurans is Yale — and Yale is Penny — in a way that can be said about precious few individuals.”

Laurans began her Yale career in 1973 as an assistant professor of English, and since then, has had many roles at the university. She served as senior staff to, and a member of, numerous university advisory groups, from the Committee on Yale College Education and the two original committees on the new residential colleges, as well as the committees that developed the academic program of Yale’s Tercentennial and developed the Koener Center. She has been a senior counselor to the last three deans of undergraduate admissions and to two directors of athletics, and has been an adviser to organizations including the Opera Theater of Yale College, Yaledancers, and the Shen Musical Theater Curriculum. In addition, for nearly a decade, she was the secretary of the Alpha of Connecticut Chapter of Phi Beta Kappa.

As special assistant to the president, Laurans drafted many key university documents and reports. Her course, “Versification,” which she taught until recently, was taken by many aspiring poets and critics.

In her own letter to members of the Jonathan Edwards College community, Laurans said she hopes to focus on her own writing in retirement.

“I cherish the college, which as been a part of my life since I arrived in 1973,” she wrote. “I have been here in the last seven years during some spectacular moments: the great JE reunion of 2014, which brought together hundreds of former and present members of JE; winning the Tyng cup three times in a row; Wet Monday spectaculars; elegant spider balls in the Great Hall; the hilarity of the Halloween costume judging contest; singing around the piano at holiday dinner; inspirational teas, the excitement of Culture Draw; the intimacy of fireside chats. … JE has an incredible history of stewardship. I truly believe any new master entrusted with the college will feel the fierce pride, loyalty, and commitment I do, and gladly take up the privilege of knowing you, appreciating you, advising and guiding you, and of keeping the college and its 80-year traditions strong. In this JE students will help, as you always have helped me.”