New exhibit at Sterling Library commemorates ‘The Kings at Yale’ 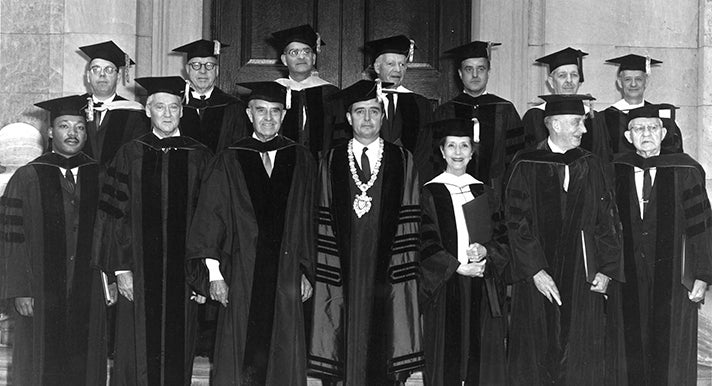 Martin Luther King Jr. was arrested and jailed on June 11, 1964 after attempting to integrate the white-only Monson Motor Lodge in St. Augustine, Florida.

Four days later, released on bail, he attended commencement ceremonies at Yale University where he received an honorary Doctor of Laws degree recognizing his nonviolent campaigns against racial injustice.

“The Kings at Yale,” a new exhibit at Sterling Memorial Library, commemorates that occasion and other visits that King and his wife, Coretta Scott King, made to campus. The exhibit, on view in the library’s nave from Jan. 11 through March 11, includes reproductions of photographs, correspondence, clippings, and other materials drawn from Manuscripts and Archives at the Yale Library.

Judith Schiff, the library’s chief research archivist, recalls gathering by the Noah Porter gateway with other university staff to catch a glimpse of King as he participated in the commencement procession.

“I felt like I could reach out and touch him,” says Schiff, who has worked at the Yale Library since 1961. “I had this unforgettable feeling of having eye contact with him, though he was probably just taking in the scene around him.”

The crowd of about 10,000 people gathered at Old Campus was almost entirely white. (Yale admitted its first substantial group of black students in 1964. The graduating class of 1969 included 14 black members.)

“As your eloquence has kindled the nation’s sense of outrage, so your steadfast refusal to countenance violence in resistance to injustice has heightened our sense of national shame. When outrage and shame together shall one day have vindicated the promise of legal, social, and economic opportunity for all citizens, the gratitude of peoples everywhere and of generations of Americans yet unborn will echo our admiration as we proudly confer upon you the degree of Doctor of Laws.”

There were 12 other honorary degree recipients that day, including diplomat and former New York Governor Averell Harriman, B.A. 1913, Peace Corps founder Sargent Shriver, B.A. ‘38, L.L.B. ‘41, and actors Lynn Fontanne and Alfred Lunt, but, according to a report in The New York Times, only King received a standing ovation.

King expressed his gratitude in a letter to Brewster dated June 24, 1964.

“Very seldom, if ever, have I had an experience as meaningful as the one I had at Yale a few days ago when I was the recipient of an honorary degree,” King wrote. “Such an expression of confidence and support will give me renewed courage and vigor to carry on in the struggle to make the American dream a reality.”

That same year, King received honorary degrees from Wesleyan College, Springfield College, and the Jewish Theological Seminary. He was awarded the Nobel Peace Prize in October 1964.

Yale’s recognition of the civil rights leader drew praise and condemnation across the nation. The exhibit includes reproductions of letters Brewster received from alumni and others — some laudatory and others critical.

Gerald Peterson of Sunnyvale, California, wrote that the decision to honor King “will go far to discourage tyranny and bring about justice for the Negroes.”

A letter signed “A very disturbed parent” argued that the country had reached “a new low when a university as important as Yale extends the honor of Doctor of Law to a man who has violated the laws and been in jails all over the country, and had to get bailed out of jail to receive the award.”

“What must the free countries of the world think of us?” wrote the anonymous correspondent.

The exhibit provides a sampling of the response from editorial writers across the country.

The Hartford Courant called the event “a good day for King” and “an even better day for Yale.”

The editorial writer for the News and Courier of Charleston, S.C., offered a different point of view: “Terror is one of the most useful weapons in the arsenal of communism. Dr. King’s degree should read ‘doctor of terror’ instead of ‘doctor of laws.’”

The exhibit covers a visit King made to Yale in 1959 as part of an undergraduate lecture series called “Crisis in Modern America.” His lecture, “The Future of Integration,” was published along with others in the series.

Corretta Scott King returned to Yale in February 1969, less than a year after her husband’s assassination. After she received the first Frances Blanshard Fellowship, which supports the enrichment of life and intellectual experience of women at Yale’s graduate and professional schools, she delivered a lecture, “The Role of the Academic Community in Today’s Turbulent World,” at Woolsey Hall.

Two years before receiving his honorary doctorate, King had visited Yale in January 1962 at the invitation of University Chaplain William Sloane Coffin and gave a sermon at Battell Chapel. Audio of the sermon is available online.

Sterling Memorial Library is located 120 High Street in New Haven at the center of Yale’s campus. For hours of operation, visit the library’s website.